Among our favorite campgrounds is Glimmerglass State Park, at the end of Otsego Lake opposite where Cooperstown resides. But when we made our reservations, the pandemic had not hit the US, yet Glimmerglass was already booked solid for this week in June.

What a fortuitous bump! We discovered Lake Gilbert State Park, slightly farther from Cooperstown than Glimmerglass, to the south and west. Gilbert is much smaller than Otsego but still lovely and popular.

Our site, #2, gets quite a lot of morning and early afternoon sun, necessitating some AC, but it is elevated and relatively private. John, Mary, and Riley are next door in site 3. The only disadvantage of the two sites was that J&M were next to a dusty grail trail going right beside them up to a ball field (not marked on the maps) that no one appears to ever use. The staff, however, would drive up there occasionally, casting dust in J&M’s living space. 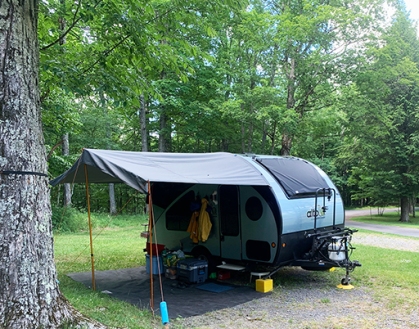 The camp area we chose is one of 2 in the campground (called Hilltop) and is grassy and open, with stately trees scattered around the middle and a large bathhouse with 4 private toilet/showers and the usual men’s and women’s group areas. There is also a dishwashing station, and a washer and dryer, but we had some reservations about the clothes washing area, as it’s outside with the dishwashing area.

When we checked in, the group bathhouse areas were closed, but the 4 private rooms were disinfected several times daily. By the time we checked out, the whole bathhouse was open.

There were 4 large RVs there when we arrived and it became obvious they were all together. None of them wore masks the whole time we were there, and they gathered at one site or another to eat and party together. This only got annoying on Friday night when “Green Shirt” had a few too many beers and began talking VERY LOUDLY and being quite obnoxious. One family among the group had mounted a large boar’s head on a step ladder at the hitch end of their rig, and upon its head was an enormous MAGA hat. ‘Nuff said.

Along with Riley, there were a number of dogs there—most were well-behaved—with whom Riley wanted to be friends. So he’d whine and bark sometimes upon seeing some of his species about, which, in some cases, set the other dogs to barking.

The days we were at Gilbert Lake were sunny and quite warm, but there was little humidity. Every afternoon gray clouds would roll in and we could hear thunder in the distance, but it only showered on us once. Riley has anxiety issues with thunder, but on only one evening did he need his “thunder jacket,” actually a dog life vest for water, to ease his discomfort.

The downsides of Gilbert Lake for bicyclists are 2: First, the state of the paved roads is terrible (broken up, patched, and pitted); and second, there are no rail-to-trail conversions anywhere in the area that we could find.

On the 19th (Juneteenth) Jack and I took a short 7-mile tour of the area, sticking to the pubic roads in the campground, checking out the enormous cabin area (33 or so, some of which were built by the CCC back in the 30s or 40s), the beach and concession areas (beach open, concessions closed), and the lower, larger camping loop (called Deer Run maybe?). That camp loop was partially open with 3 RVs in sites, but the staff were doing work around the loop, probably preparing for the July 4th holiday-goers. That campground area is closer to the lake’s beach and is the home of the only dump station in the entire complex. 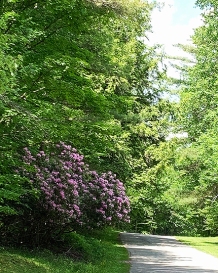 Saturday the 20th, Jack ran in to the nearest village (Morris) to do a reconnoiter and some laundry. Other than the laundromat, there’s nothing of significance in Morris (not even a grocery store). Meanwhile, I took a ride to check out the path circumnavigating the lake. Signs warn folks from entering, calling it a service road, and the folks at the camp store said there weren’t any bike trails on site, but I took my bike around anyway—John and Mary had walked Riley along the path and reported it to be okay for bikes, so I rode. A spot or three needed some extra care to avoid roots or rocks, but it was just fine.

I did 2 loops of the ride down the hill to the camp store and back to the point where I joined the lake road, circumnavigated the lake, and then climbed back up the steep hill to Hilltop. On one of the tours of the camp store, I saw a Cooper’s hawk lift from the ground near the road and make some effort to get airborne. My guess was that it was carrying something it had caught by the road.

All told, my ride was about five miles each loop, with the lake path being a bit over a mile. One time I did the lake trail counter-clockwise, and the other time I did it clockwise.

Jack got back around 11:30 and John came puffing up to get the car to go back and fetch Mary & Riley. Mary had twisted her ankle and fallen down on her knee along one of the hiking paths, ending up with a significant scrape on her knee and a sore ankle. She was fine, only embarrassed, but walking was a bit of a challenge for her.

After lunch (and ministering to Mary’s wound and resting her ankle) we all set off for Cooperstown. Mary thought that a gentle walk around the town would ease some of the stiffness and swelling in her ankle, which John wrapped with an Ace bandage.

A stroll and an ice cream later, J&M drove up toward Glimmerglass, and Jack and I hit the grocery store for the goods to make a Dutch Oven dinner for us all the next day, on our final night together.

On Father’s Day Sunday, J&M headed north to link up with Mary’s brother at a half-way point for them both. Jack and I had a lazy day reading and napping. Every day of our stay we heard and saw a Cooper’s hawk circling overhead—possibly a mate to the one I saw on my solo ride on the 20th.

I fixed the DO goulash dinner for us and we enjoyed the meal and a quiet evening around the fire, which, as usual, included some distant thunder, some gray clouds, and a sprinkle thrown into the mix.

On June 22, we packed up our houses on wheels. J&M headed south, back to Pine Grove Furnace State Park in PA en route to their home and garden; and Jack and I headed north and east to New Hampshire and an old friend, Ashuelot River Campground in Swanzey, NH. 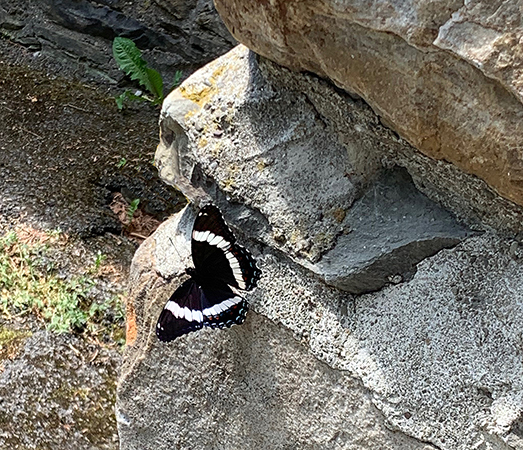