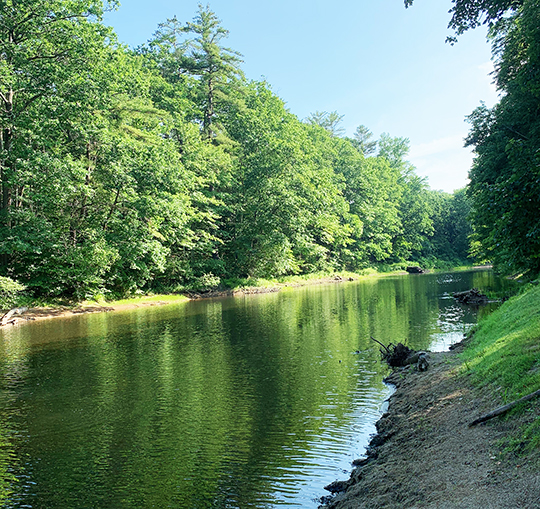 The first thing I don’t want to forget to report is that we saw a low-flying, close-our-overpass bald eagle en route from Gilbert Lake to Swanzey, New Hampshire. Of course, I didn’t get a photo of it, but it was very cool to see so close.

We arrived later than we expected to Ashuelot River Campground—a private campground we’d visited driving home from picking up our trailer from Safari Condo during the spring of 2015. You can read more about our first stay at Ashuelot and the Swanzey/Keen area at my blog post here.

But en route, our path was blocked by an unknown emergency and we detoured along a rutted, mostly-dirt road over a mountain and through the streams.

We drove slowly, primarily because we had not the first clue where we were going—but also to keep the jostling of the trailer to a minimum. Eventually, we made it back to the road blocked by the emergency and carried on our merry way (after letting the oh-so-patient drivers behind get past the slow-moving snail of a blue blockade we fondly call “Roomba”).

The campground, still managed by Chuck and Laura, has been considerably expanded. Many more sites with electric and water line the banks of the river, and many folks were floating, swimming, kayaking, canoeing, and fishing along the river. 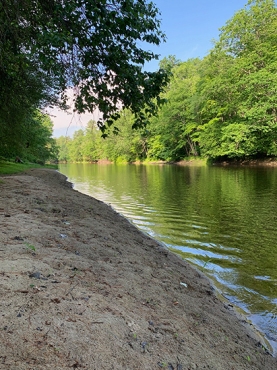 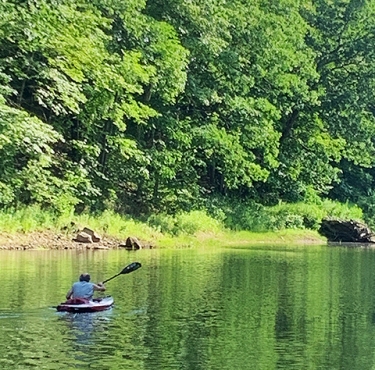 Our campsite is perfect (#35) because there was hardly anyone nearby, and we made it into a pull-through so our “view” was of the river and Roomba was parallel to the shore. It was a nice, flat site. 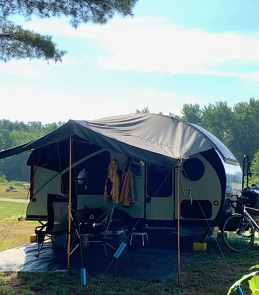 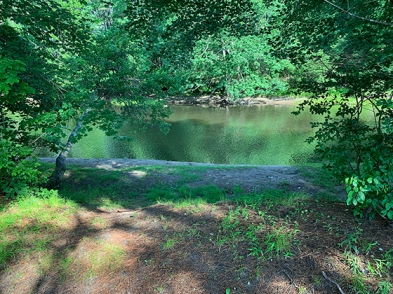 In our planning for Camping in the Time of Plague, we had been informed that Ashuelot was accepting only guests who were “self-contained.” Although we do have an on-board toilet, we use the “closet” as a pantry. It would be difficult to either convert it to its intended use (unnecessary to date) or to use it for both functions.

Knowing this, we purchased a portable camp or boat toilet, and we figured out how to fit up our screen house, with its drop-down rain curtains, as our privacy area that would include use as a private shower.

By the time of our arrival, however, Chuck and Laura had built small toilet houses with running water and porcelain fixtures—and had hired someone to come in every 4 hours between 8AM and 8PM to disinfect them. There was no hot water, but what delightful news, and right across the road fro our site, too. There was even a roomy dishwashing station on the structure.

It was plenty hot in NH, so we ran our AC almost constantly. Next to the river, there were also plenty of mosquitoes.

Despite asking everyone to self-check-in, Chuck and Laura had opened the office to a limited number of people at one time, so it was easy to access the campground’s free wifi around the office. The wifi was robust, so it was easy to get a good signal by sitting outside in Adirondack chairs or along the porch.

Our first full day there, we planned to return to the Ashuelot River Rail Trail that connects Keen to Swanzey. Upon uncovering the bikes, however, we found there had been a major failure of our bike rack.

The problem could have been so much worse—but it was bad enough. One vertical side of the aluminum tube (in the shape of an upside-down “U”) that actually holds the rack onto the front of the Alto had snapped in two right at the fitting that secures it to the trailer. The opposite vertical part of the tube was bent at the same spot. If it also had broken, who knows what would have happened to the bikes and the trailer. (In the pic on the right, I tried to remove or at least lessen the distracting effect of the background. Hope I didn’t make it even more “noisy” for you by mistake.) 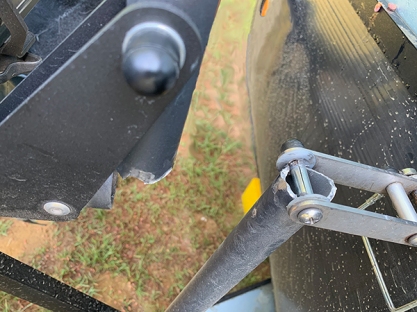 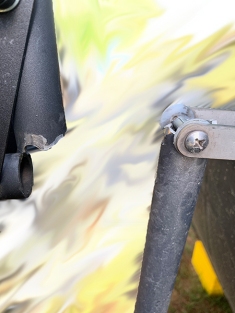 So instead of riding the trail before the heat and humidity set in, we called the bike rack manufacturer (Arvika), to see what might be done. Our goal was to get them to overnight the part to us, but the timing was tricky—located in Canada, Arvkia would be celebrating a Quebec holiday the next day, making it impossible for it to reach us before we left Ashuelot.

While the guy on the other end of the line (who happened to be the owner) promised to see if he had the part in stock, and if he did, whether or not it had been painted—we gave him our schedule and discussed shipping to our next destination campground in VT (whom we’d already called to see if they could accept such a shipment).

There was nothing to do but carry on until we heard back from him. So we rode our bikes. As before, we rode from Swanzey to Keen on the Ashuelot River Rail Trail (about 6 miles). 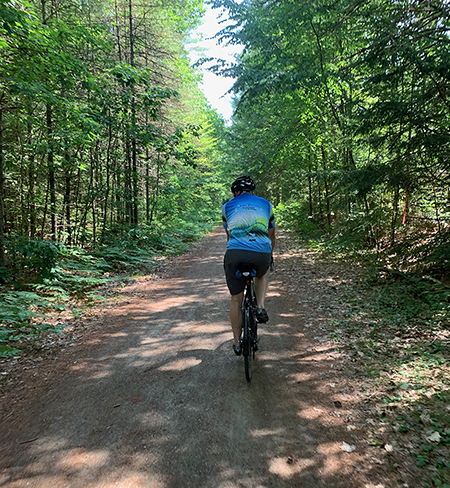 We got to Keen before lunchtime, so we had a snack sitting in the shade outside the pub we’d visited 5 years ago. Then we checked our map (a more thorough one than what we’d had before) to find out how to continue north from Keen. The updated map was excellent, with many cycling trails outlined on the Monadnock Region Bicycle Routes map.

Wending our way through town on the Industrial Heritage trail in Keen, we saw these cool bike rack-cum-park bench structures. 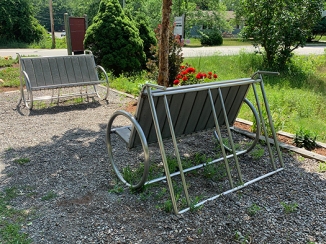 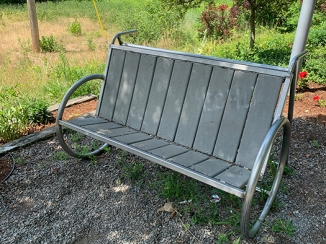 They marked the beginning of the rail trail to Walpole—another 7 miles one-way—on the Cheshire Rail Trail, which was excellent up until we climbed quite steeply uphill (wondering how a train might have managed the grade) to a road crossing called Aldrich Road. Although we did cross Aldrich and go another 2 miles to a capped landfill, the footing from the north side of Aldrich until we gave up was terrible. Enormous rocks proud of the surface, deep sand, and tough gravel made those 2 miles of the ride not any fun at all. If you head north out of Keen toward Walpole on the Cheshire, take our advice and turn around at Aldrich Road.

Back at camp, we’d logged ~25 miles at an average speed of 10 MPH. It was in the mid-80s by then, and we’d had a couple of snacks along the way, but we’d missed lunch. Happily, we had taken some lamb chops out of the freezer and accompanied them with baked potatoes (grown by John and Mary) and grilled baby zucchini. It was an excellent endpoint for a strange and vigorous day.

After our ride and before it was cool enough to get into the screen house to shower, I lounged beside the river while Jack went to the office area to get wifi and see if Arvika might have found the part we needed. Once the site was shaded, we discovered our shower house rig worked out great. We didn’t even need to heat the water—between the hose baking in the sun and the ambient heat of the day, it was an excellent, private, roomy, and wonderful shower.

Not having been able to reach Arvika, we realized there was no option but to figure out how to pack the bikes into the trailer to transport them. So we spent our last day engineering the fit, and how the rest of the pack would work when the bikes took up space we usually use for other gear.

We did a “dry run” by taking the front wheels off the bikes and wrapping them (to keep grease from painting a new color scheme inside the trailer) in enormous leaf bags we obtained from the local grocery store despite Chuck’s warning that the locals didn’t really appreciate interactions with visitors from other states during Covid-19. Once we figured out how to do it and where everything would go, we settled down to an easy pasta dinner while the bagged bikes cooled their heels outside.

The pack up morning was stressful as we tried to keep the bikes safe and the interior of Roomba from getting ripped, punctured, greased, or dented. We had most of our bedding packed around the bikes to keep them from bouncing around. For my part, being in charge of the interior stowage process, I had to remember an entirely new procedure to be sure this or that would go there before we cut off access to that or the other.

Lesson One for Camping in the Time of Plague: ADAPT. Think smart, stay safe, consider options, and adapt to whatever arises.

All things considered, we did a pretty good job of adapting to not having a bike rack. The bikes (and Roomba) made it without incident to our next destination, Sugar Ridge Campground near Danville, Vermont.

ADDENDUM: I forgot to note that we’d discovered President Trudeau had extended the closure of the Canadian border, making it impossible for us to keep our service appointment at Safari Condo—the stay afterward at the Canadian campground we’d reserved was likewise, toast. Instead, we’ll “drop back and punt” and stay at Robert Moses State Park in New York for those 7 days. In addition, the group for whom I edit and layout their quarterly magazine officially canceled their annual meeting (which I’m expected to attend) due to Covid-19. This year, it was to be held in Pittsburgh, one of my favorite cities. While we will stay at the campground we’d originally reserved near the site of the convention, and while we will ride the Great Allegheny Passage as we’d planned, I won’t need to pull out any of the “nice” clothes I brought along to wear as an employee of that group during their big annual meeting. 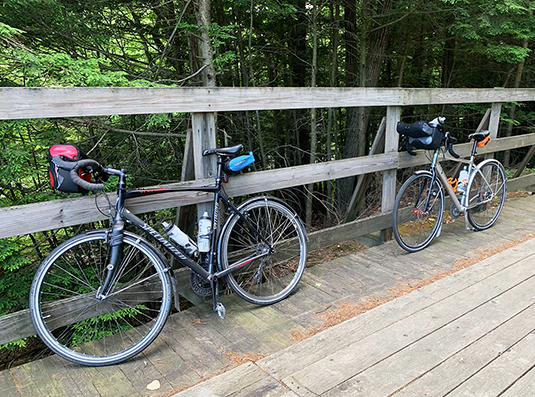