Again, the forecast was for lousy weather developing in the afternoon, so we wanted to see what that Cumberland Valley Rail Trail was like, which we had heard of for the first time when we were at the Visitors Center, before the rain came.

So on Monday, May 11, we loaded the bikes on the car and headed to Newville, PA, along Rt. 233 from the park. Navigated moderately easily to the Trail Head, and were mightily impressed with the quality of the facilities and the surface of the trail. We read on a map that the trail is planned to head north from Newville toward Carlisle, but that is a future plan and it’s not open to the public yet.

The section we rode, however, was a 9+ mile stretch south from Newville to Shippensburg. We discovered in short order that the pavement part of the Newville trail head ended, but after that it was packed cinders, much like the New River Trail and we were having a blast. There were some informational markers along the way — some were about geology and culture of the Cumberland Valley, and some were Civil War markers about the build-up to the Battle of Gettysburg.

This was an up-and-back, so Jack figured he could see the Civil War markers on the way back.
Once in Shippensburg, we asked a lady with a youngster and a stroller where we might eat, and she directed us to a pizza place in town, near the college.

After a few false starts, we found Polly & Stone’s, a great place serving both pizza and burritos, and ate healthily of meat burritos and some replenishing bottled juice. AND they offered free wi-fi. Nice to discover that Pat had not, in fact, had to put the rooster in the stewpot (yet).

When it was all said and done, we covered another 22 miles, with nearly 2 hours of riding time and about 1.5 hours of stopped time. It was a totally glorious ride altogether. While Jack reported to dally on our way back to Newville, reading the markers, I wanted to head straight back and get some real training in, so I told him I’d see him at the end. It’s nice to have a traffic-less, flat, good footing training ground for sprints.

Both of our competitive spirits took ahold of the handlebars, however, and even though I was trying to speed right along, he managed to catch me from behind twice. Had to take a bit of a cool-down pedal at the end of the final sprint to the Newville Trail Head. Good fun.

Our last full day at PG Furnace SP, and we first stopped at the Appalachian Trail Museum, a cornerstone of the area. Since I mentioned the Museum earlier, I won’t dwell. Other than to again highly recommend a visit.

Then we rode around some of the park, not really expecting too much, but stumbling into the Cumberland Co. Hiker-Biker trail, a 2-mile run that takes in some of the AT, two fishing/swimming/boating lakes, and a lovely stream. The lakes are Laurel Lake and Fuller Lake and one (probably the second, larger, Fuller Lake) has a great dam where fisher-people were hard at work plying the waters. Both lakes have sandy swim-beaches, and there were many day-users out and about, including a few school-bus-fulls of kiddos doing nature things.
(photo of swim beach)

The part of the Hiker-Biker Trail that follows the AT is closed to vehicle traffic.

But keeping on we hit a paved road, with signage indicating that all should share the road as it’s used by vehicles, hikers, and bikers alike. It was a very nice ramble down to a highway, and we turned around and rode back, headed to the historic furnace itself. But before the creek narrowed to near-nothing, back at the park entrance, we saw this scene of mid-water rock-balancing. It was a pretty cool “sculpture” find serendipitously.

Then we hit the historic furnace and the info there.

This is what it looked like when in operation: 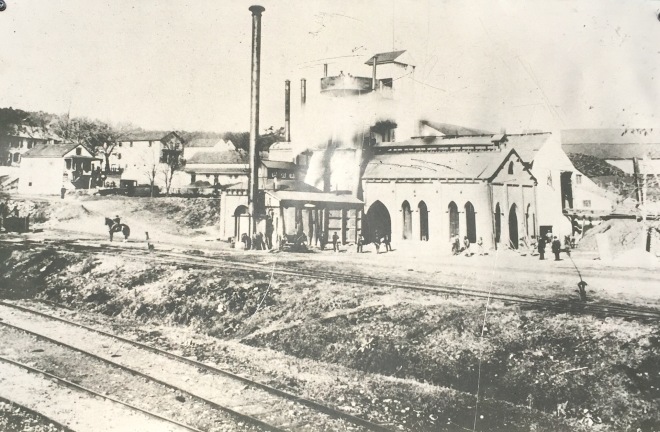 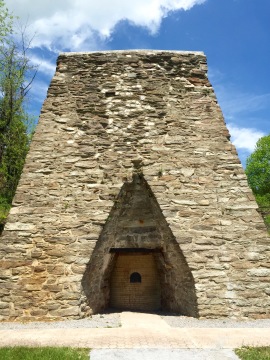 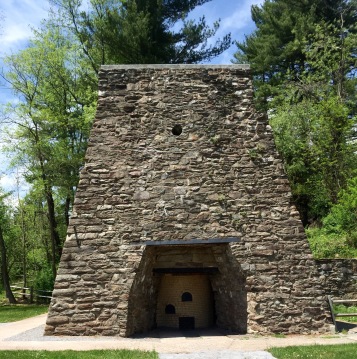 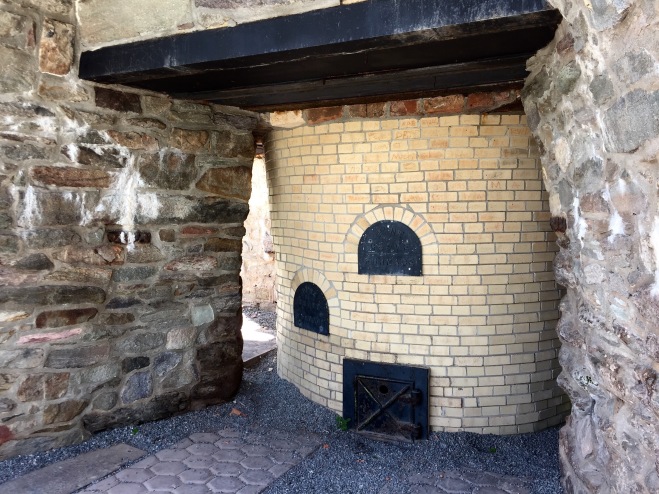 So it was a much more involved and complicated structure, once upon a time. 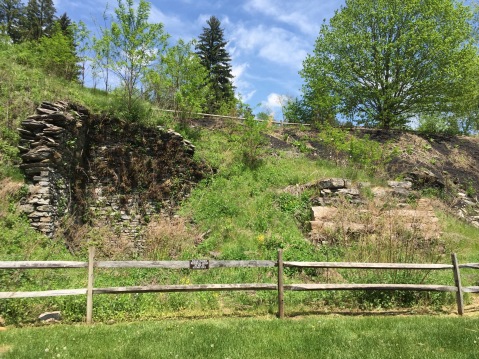 When railroad-building (I think this is what it said) was happening, it made most sense to have the iron furnace local, rather than shipping in the iron — plus they wanted to have the smelting of the iron done close to the deposits of iron ore.

Anyway, what they’d do is follow the design of furnaces used 400 years earlier than the 19th century: A thick stone furnace shaped like a flat-topped pyramid was constructed, to convert minerals to metal.

At the top of the “pyramid” workers dumped alternating layers of charcoal fuel, iron ore, and limestone flux into the heart of the furnace. As the charcoal burned, air was forced into the furnace from the outside (a water wheel pumped bellows that blew air through a pipe and into the bottom of the fire), and this was able to raise the temperatures to 2,600 – 3.000 F.

This burning created several byproducts: carbon gasses escaped from the chimney; molten iron sank to the bottom; and impurities (slag) floated atop the liquified metal.

Workers would draw off the useless slag and isolate it away from the iron; meanwhile guttermen channelled the iron into castings in the floor, connected to one another so the iron would flow into all channels — these were called “pigs.” (Thus pig-iron?)

Typically, wooden buildings and machinery surrounded the furnace made of rock, firebrick, and sand and clay for insulation along the chimney. Funny, how wooden buildings were built next to high burn temperature activities — the parts that survive, of course, are the stone furnaces themselves.

Here’s a cutaway photo of the furnace — hope you can read the parts at the right. 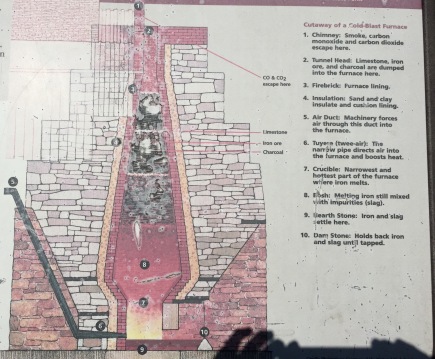 Found the whole thing fascinating. This we wound up our adventures in PG Furnace SP. Definitely more to see and do here — many “bike friendly” road tours outlined on the maps here, and there’s lots of beautiful countryside to see. Hope we can come back some time.

Used the afternoon to do some pre-packing for the re-hitch and depart tomorrow. Destination: Bear Creek State Park in Virginia.