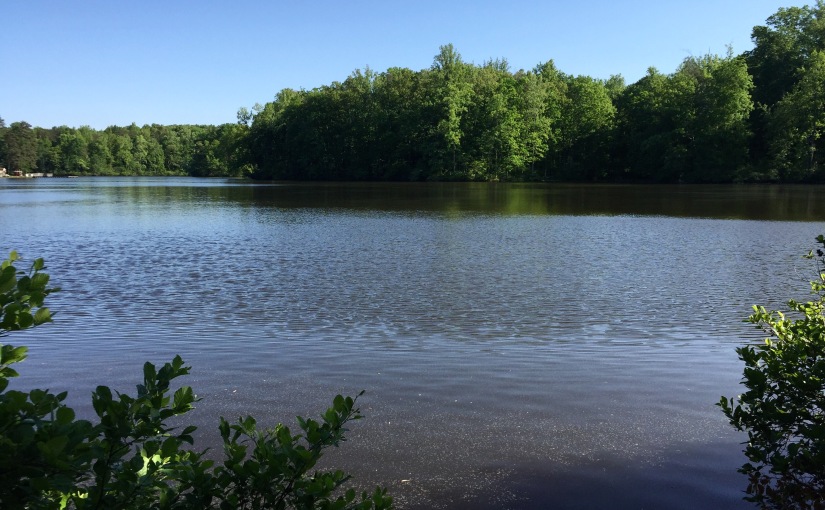 We rolled back into Virginia on Wednesday, May 12, driving down Rt. 15 through PA and MD. Went through my old home town of Culpeper, and we stopped in Orange for some groceries — enough to make our two final dinners of our trip.

As we rolled our groceries out to the camper, a van full of folks were goggling at it, and they asked a question as we approached — the rattle trap that was our grocery card did not allow us to actually hear what they said, but as we got closer, we invited the to come see the inside. Turns out, it was a van full of nurses finishing up a late lunch and heading back to the office.
Of course, the roof was in towing mode, and we had a bottle of wine we wanted to put in the fridge, so we unlocked. They were crouching down to see inside, so we offered to raise the roof for them and they were mightily impressed. Gave away our last Safari Condo business card to one who said she’d been looking for something exactly like this but had not found it yet. They didn’t stay long and so shortly we were on our divergent ways.
We arrived later than expected because we took about an hour using some free wi-fi at a McDonalds, and the grocery shopping, and one other stop for fuel. We also got behind some backwoods street paving work on a narrow road leading to the park, and sat for a good half-hour waiting for a chance to get through.
Once we got here, our hostess suggested a lovely group of sites (empty except for us) right near the shore of the lake, in the woods and not too far from the bath house. Even though we’re going to be here only two nights, and our first day was nearly gone, we did an entire set-up with awning, un-hitch, and bike offloading. 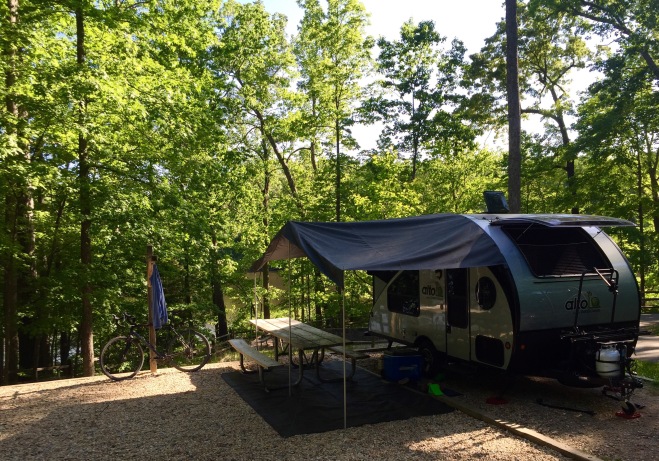 The temps were cool and the bugs minimal (until sunset) and there was a bench right down the walk at the shoreline that was blissful for a wind-down rest. The fish were popping the surface, the squirrels were messing about in the forest litter, and some geese came in to the water. The breeze tickled our little bells hung on our awning and we had a simply splendid evening.


There might even be some cycling to be had, if the maps we were looking at (posted at the kiosks) are any indication. Tomorrow will tell the tale.