Along the way toward Confluence, we hit Ohiopyle, one of my (and Jack’s) favorite destinations along the Great Allegheny Passage trail. While we’ve camped at, cycled through, eaten in, and wandered around Ohiopyle on many occasions in the past, we’ve never visited Frank Lloyd Wright’s nearby Fallingwater house.

It was a long day, even though we only covered 30 miles on our bikes, with one or two significant climbs up to extraordinary views. Here are some random pix of the trail (taken both before and after our Wright adventures) the Youghiogheny River, and some sights along the way. 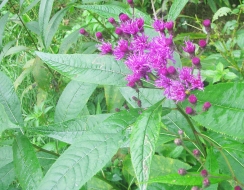 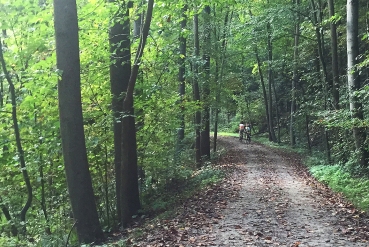 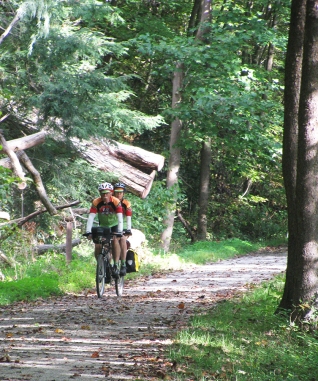 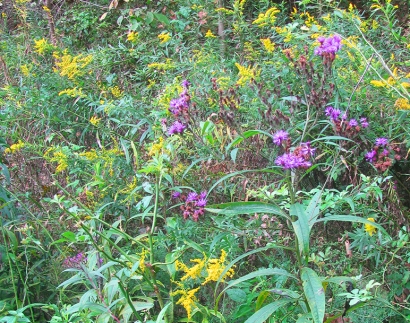 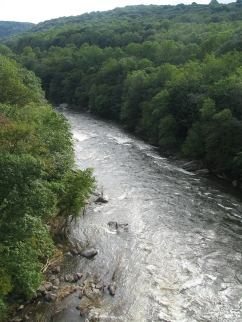 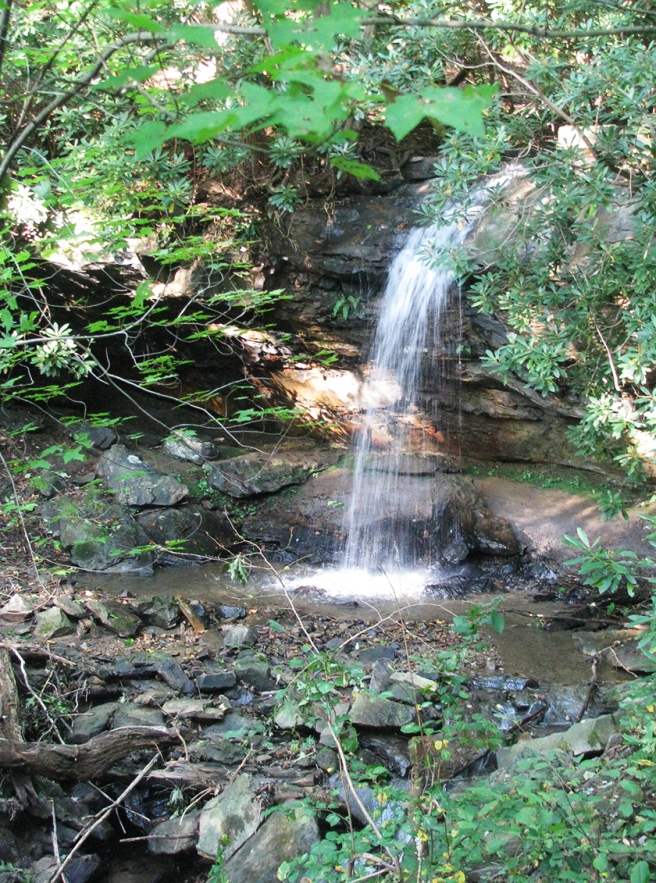 When we rode into Ohiopyle, we took a moment to look at the raging river, which is famous along this stretch for rafting and kayaking (experts only). We were told by the locals that a few days ago, due to Gordon, you could not see any rocks nor the waterfall, there was so much water flowing past after the storm.

We gathered at Wilderness Voyagers to change our shoes, lock up our bikes, and board the van to head up to Fallingwater—possibly the most famous of F. L. Wright’s architectural achievements. Designed in 1935 for the Edgar J. Kaufmann Sr. family (of the Pittsburgh department store fame) Fallingwater was completed in 1939, constructed of sandstone quarried on the property and built by local craftsmen. The decks are made of reinforced concrete cantilevered over the signature stream beside which the home is built, and which is an integral feature of the structure.

While the Kaufmanns never lived full time in the home, it was private until 1963 when son Edgar Kaufmann Jr. entrusted the home, its contents, and grounds to the Pennsylvania Conservancy. Fallingwater is the only Wright work to enter the public domain with all of its original furnishings and artwork intact.

Unfortunately, they do not allow photographs of the interior of the home, but it was set up in the exact way the owners lived in it, right down to the type of whiskies they served. Also, the artworks on the interior were quite varied and beautiful—all were originals—so I was disappointed that I could not photograph and share some of the best.

Anyone who knows anything about Wright knows that his primary passion for his architecture was that the structure(s) would inhabit their environments nearly seamlessly. He was a prime advocate for merging the inner spaces with the outdoors. Fallingwater is most assuredly an excellent example of how that might be achieved, and then lived by the inhabitants of the structure. Some of the beams holding up the house are embedded in the rocks, and you can see some of the natural, in-place boulders integrated in part of the fireplace. Through a glass door and down some stairs, you can take a dip in the bright stream water that flows beneath the home. Desks and other pieces of furniture are constructed around or imbedded into elements like chimneys, glass corner windows, and doors.

If you ever get the opportunity, it’s worth the fee for the tour, despite my feeling of being herded through the rooms of the home on a specific schedule so the guides could get as many people in and out of the home as efficiently as possible. There were tons and tons of people there during our tour, but no stragglers or folks not “contained” in a defined group. So we felt as if we were nearly alone in the house.

Also, we were not hurried: none of our questions (except one or two that our newbie guide admitted she did not know the answers to) were flicked aside or ignored, and our guide proved quite knowledgeable about every amazing aspect of the home.

We were able to take some pix outside, as we finished in the Guest House and were headed back to lunch and our pick-up point. So I’ve grouped them below—but first I wanted to show my photo of the “most famous” perspective of the house, side-by-side with Rachel Sager’s mosaic of the same view (from my post dated Sept. 15, GAP 5, Part 1).

Every room has one of the cantilevered decks outside.

The structural supports for one of the decks incorporates the rock of the landscape. 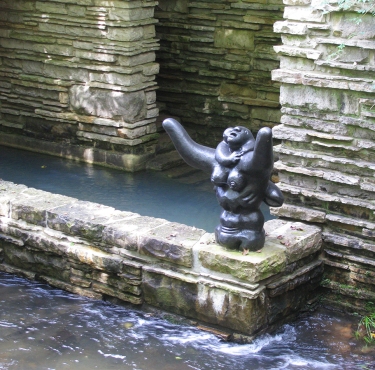 The falling water upon which Fallingwater is build (and on which its design is based).

We had lunch at the Fallingwater cafe, which was excellent. But again, because of Gordon, we were not able to participate in some of the things we had hoped to do in and around Ohiopyle, so we all elected (and we persuaded our Wilderness Voyagers driver) to go a bit farther afield from Ohiopyle to see another Wright property, Kentuck Knob.

This was quite a different endeavor for Wright, although he still had the concept of fitting the structure into its environment, and bringing the “outside in”—at least on one (the private) side of the structure. It was obvious that this commission was undertaken by a family with more limited means than that of the Kaufmann family. In 1953, I.N. and Bernardine Hagan bought 89 acres in the mountains above Uniontown, PA. The Kaufmanns and the Hagans were friends, and based on their visits to Fallingwater, the Hagans hired Wright to design their home. Kentuck Knob was one of the last homes to be completed by Wright.

Kentuck Knob was designed in a hexagonal motif as a “Usonian” house. Linguists and historians believe the term was coined in 1903 by writer James Duff Law. In Here and There in Two Hemispheres, Law quoted one of his own letters, “We of the United States, in justice to the Canadians and Mexicans, have no right to use the title ‘Americans’ when referring to matters pertaining exclusively to ourselves.” He went on to propose the terms “Usonia” and “Usonian” and it appears that Wright picked it up. The first known published use by Wright was in 1927.

In Wright’s lexicon, it evokes his vision for the landscape of the United States—including city planning and all types of architecture—to distinguish the art form of the time from all previous architectural conventions. In his vision, affordable housing would be made widely and universally available by designing low-cost homes that used passive solar heating, natural cooling, natural lighting with clerestory windows, and radiant-floor heating. They were usually envisioned as one-story houses with flat roofs, and often in an “L” shape to fit around a garden terrace, merging the indoors and the outdoors for comfort and light. Characterized by locally-found native materials, they incorporated his passion for visual connections between indoors and outdoors by using lots of glass and basic, simple designs. The term “carport” was coined by Wright in connection with his Usonian vision, to indicate a minimalist shelter for a vehicle.

In Pleasantville, New York, there is a 1950s-era intentional community created on the Usonian model, which is now an historic district. Wright designed 3 of the 47 homes in the Pleasantville community.

Likewise Kentuck Knob incorporated the Usonian vision by being single-story, low-cost, and designed to take advantage of radiant floor heating and passive solar gain. The hexagonal proportions of each and every room makes for fascinating decorating and furniture choices and designs.

Again, we were unable to take photographs inside, but the exterior is interesting, with narrow windows on the “public” side of the home, that are made more private with the addition on the outside of a repeating pattern cut into some of the beautiful red cypress wood from which much of the interior is made. The central “heart” of the home is the kitchen, from which all the rest of the rooms “radiate.” Modest in square footage, the kitchen “ceiling” reaches up to the roof, which is the source for light, having a glass ceiling. A retrofit of screening helped the kitchen from becoming too hot to stand in. Wright intended for there to be only natural light in the kitchen, which made it impractical for cooking at night, so another change by the owners was pretty neat countertop lighting and fixtures ahead of their time.

This tile is F.L.Wright’s “signature” on the structure.

Along the back of the house stretches a long porch offering solar gain in the wintertime, and shade in the summer, with through-holes in the overhang roof so the winter sun could melt the snow/ice on the porch floor, but also offer lovely “rain spouts” during summer to unite the interior with the weather and surroundings.

When the Hagans lived in the home (full time) there was a spectacular view from that back porch. There is debate about whether to cut the now-grown trees to re-kindle that view from the house, but it’s only a short walk to an open area (available for weddings, etc) from which visitors can take in that view. 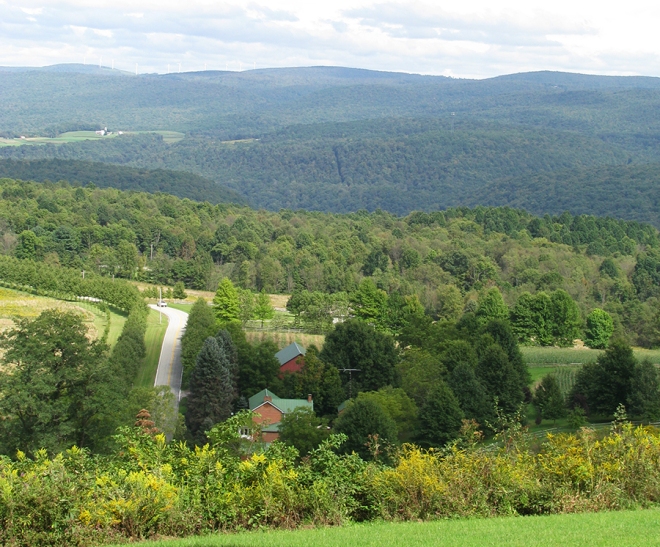 And all along the way, and everywhere around the property, high and low, is outdoor art, sculptures, wind chimes, and wonders. At the “bottom” before the shuttle takes visitors up to the house, and all around the house itself are beautiful and interesting sculpture walks that visitors are encouraged to wander.

A piece of the Berlin Wall

A lighting fixture at the entry drive

This sculpture near the view moves with the slightest wind — it is by the same artist who made the animated water sculpture as well as a light fixture over the master bed that moved and changed with the whispers of wind in the room.

Among our options for the day was a cycle to the dam that tames the Youghiogheney River. But we were all pretty worn out, so Allen drove us over in Minnie van. An enormous spume of water was gushing out of the dam, and the locals who were there to see this anomaly reported that they’d never seen so much water being released from the lake at once. Directly below the dam is the “Outflow Campground” which appeared to be in serious jeopardy, if they were releasing so much water to ease stress on the dam.

We also heard that the remains of Hurricane Florence were due to reach the area, that night and the next day, adding to the burden left by Gordon the week prior. So the release was in anticipation of a night and a day of additional rain.

We overnighted in a “guest house” in a nice neighborhood—part Air BnB and part small Inn—and the group enjoyed a single malt whisky tasting hosted by Allen, after having dinner on the porch at the Lucky Dog Cafe (I needed some bug spray to have been able to fully enjoy our meal) which served delicious Mexican-inspired food.

Tomorrow: Riding through Florence (to Meyersdale)