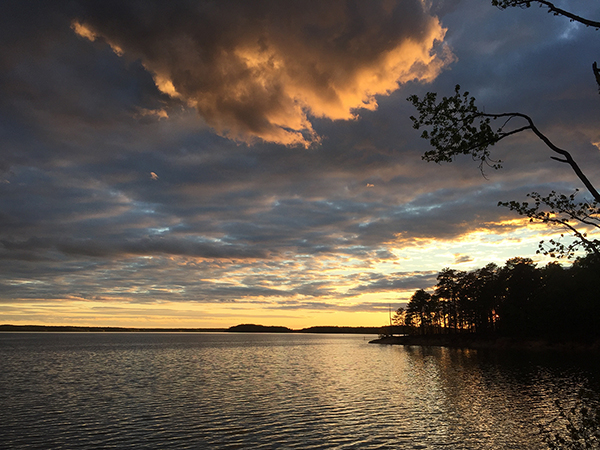 We finally got a break in the weather, but most of the Alto crowd had left. Jack and I headed to South Hill for foodstuffs enough to fix dinner for John (arriving without Mary, who has fallen under the weather, or possibly the pollen) and additional Floyd friends, Brad and Ellen.

Because we’re settled and they’re arriving in the afternoon and likely won’t be set up before dinner time, we texted with them to let everyone know we’d handle dinner for all of us. We found the fixins for the fennel chicken dish we like to cook in the Dutch oven, and we also got some pork loins to grill for Mary and Allen who were coming to the campsite on Monday.

I began cooking circa 5:30, completing it by around 6:30, and served directly from the Dutch oven, with Omnia heat-and-serve rolls and roasted potatoes. Afterwards, we cranked the Solo fire, and the Karl & Hari crowd came over from loop C to share. 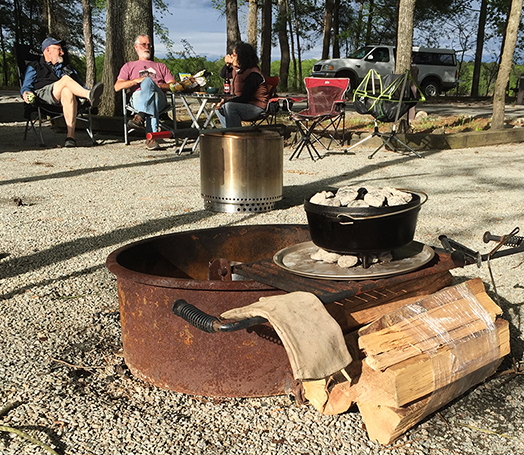 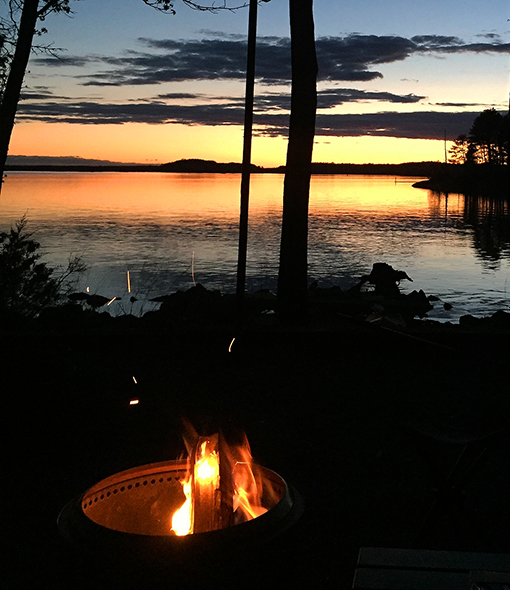 It was another glorious sunset, with the sun peeking below the clouds and shining brightly on the end of our peninsula, making the trees look like they were about to combust. 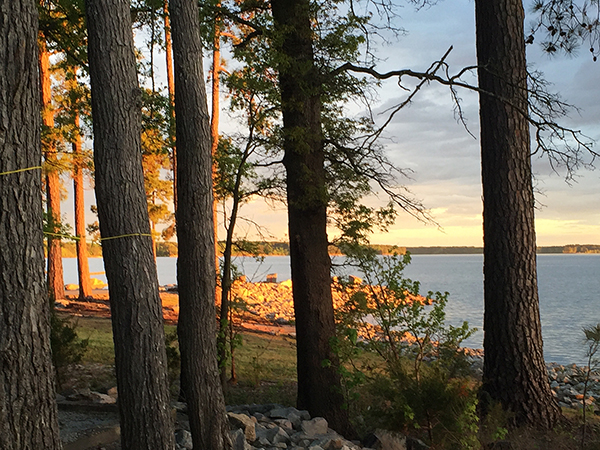 No good sunset is complete without a good reflection photo off Roomba (it’s a thing with the Alto models that have lots of windows). 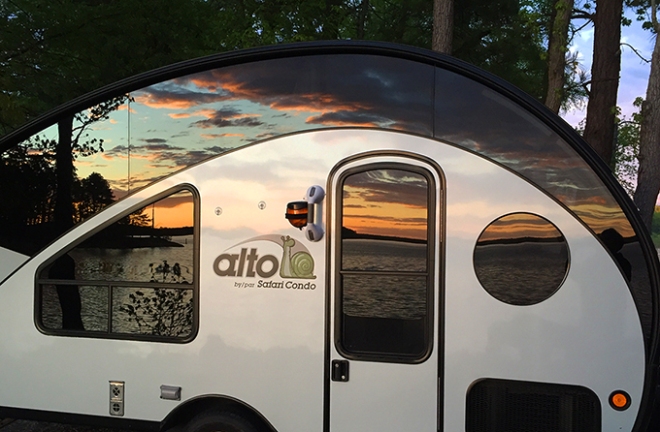 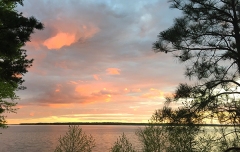 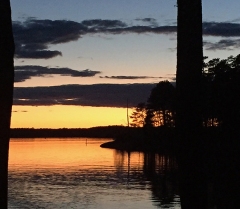 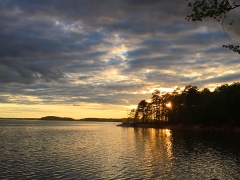 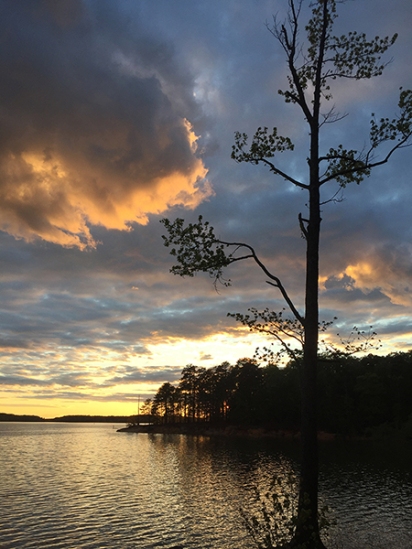 First thing in the morning, I watched an adult bald eagle fly over. The day dawned cold (47 degrees) but I was outside watching for birds and enjoying the clear morning by about 7. I wasn’t the only early bird, as a couple of fishermen were plying the waters near our site also. 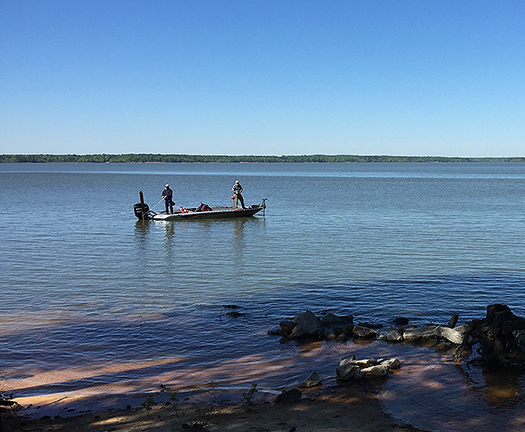 Before lunch, we took a bike ride with Brad and Ellen while John took a kayak paddle-about. We toured around the campground, and across the hydro dam, where we stopped both coming and going to watch bald eagles and osprey and enormous fish near the dam. I could have watched the birds all day. 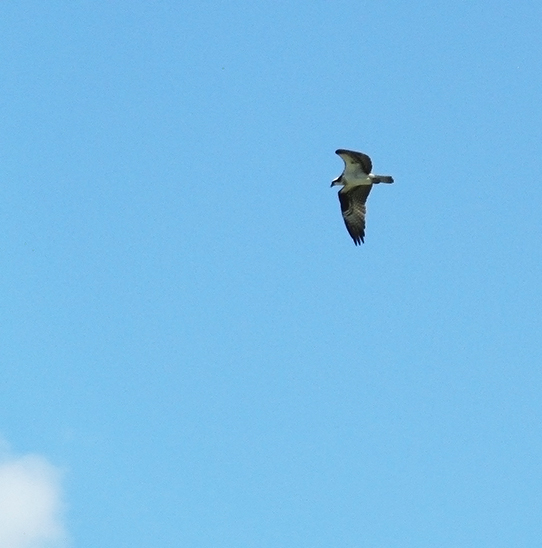 Instead of going back to the campground, we turned right at Rt. 4 and headed to the tailwaters of the dam, where there were tons and tons of birds all doing wondrous things, just carrying on with their birdy lives. We got off our bikes again to watch eagles and osprey and herons and cormorants and so many more. Saw this heron trying to hide while roosting in a tree. 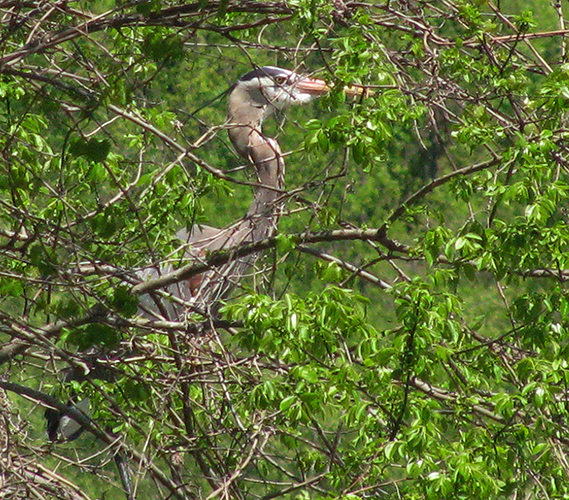 Returned to eat a late lunch and enjoyed the sun. Even though the breeze picked up as we ate, the sky was incredibly blue-blue, and the sun was toasty hot.

Allen and Mary came for dinner around 6, and we grilled a pork loin. John, Brad, and Ellen brought their own dinners and we all ate together. Everyone enjoyed another campfire, topped off with a celebratory dram to mark the end of our trip, as well as Brad’s (Apr. 24) and Jack’s (Apr. 26) birthdays.

Naturally, on the day we must leave, the temp soared to 52 degrees and the wind stayed dead calm. Heard several lonely loon calls in the early AM.

We enjoyed a leisurely morning and said goodbye to Brad and Ellen around 8:30. Watched a contest between a lone loon with a fish, versus an entire gaggle of cormorants. The cormorants were doing a tag-team “harass the loon so it drops its fish” game, with much of the action happening under water. The loon would dip below, with 2 or 3 of the cormorants flying over to where it dove and diving after it. The loon would pop up again and other cormorants would fly over to it and dive after it when it dove for cover again.

Finally, the loon surfaced and up-ended the fish so it would go down its gullet, and suddenly, all the cormorants looked like they were bored, as if they’d had nothing to do with the loon at all. They all went different directions after the game was won by the loon.

Once the water warmed up a bit, John took a final kayak tour before he began to load up for departure. We ate an early lunch and began breaking camp in earnest around noon. 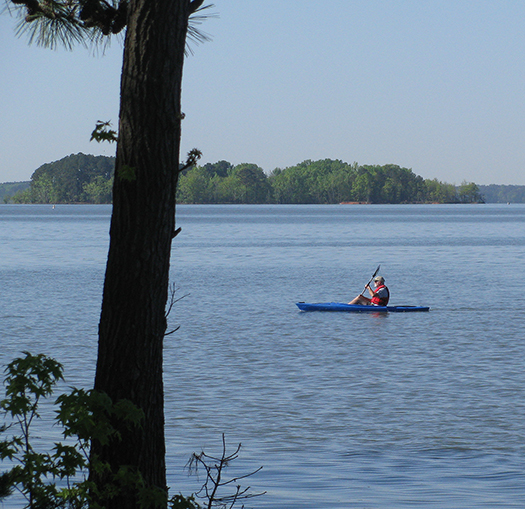 Just as we were nearing our own departure time, we saw a Canada goose family swimming by. The water was a bit choppy by then, but the little goslings were pretty easy to see. The hard part was getting the youngsters and both parents in my camera’s frame at the same time. But I finally managed. 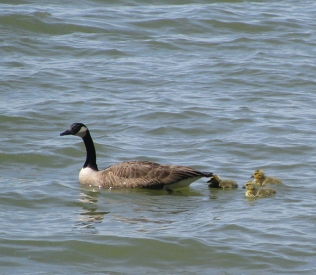 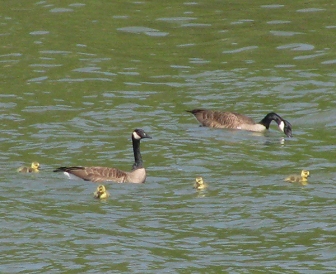 It was an uneventful drive back home, and we parked Roomba in the driveway near his garage overnight. All was well with the house and critters and we were thankful for Surya, our house sitter. Naturally, the first thing Mischief wanted to do was play ball. 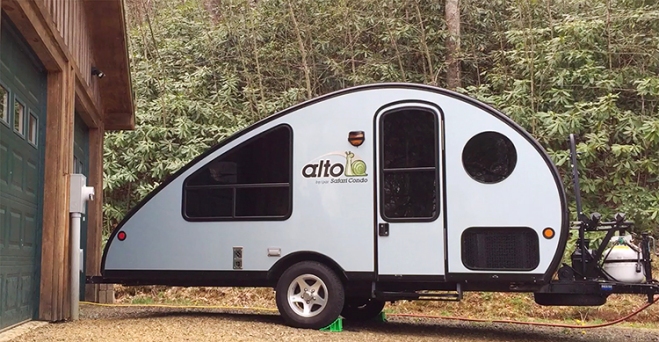 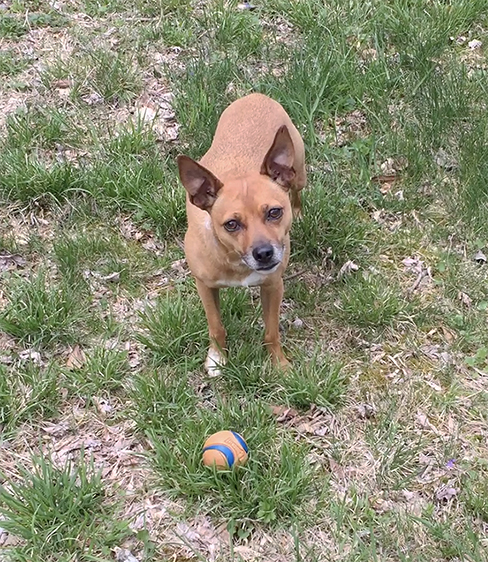 I grabbed some meat and went out to see how Beebs (redtailed hawk) was doing, and she seemed quite keen on the food, but not so sure about me. 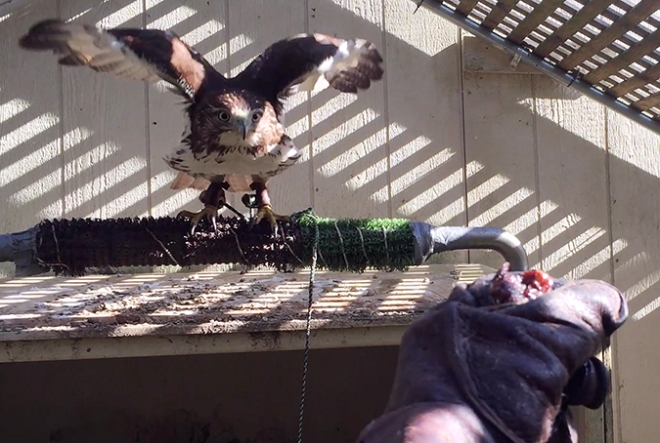 Thus the 2019 Spring Trip comes to a close. It was wonderful and fun and so very exciting to share with so many of our friends and to meet new friends along the way.

More adventures to come—watch this space for the next peregrinations we undertake with our Alto camper.

On March 6, I took a walk down the fire road that heads into Rock Castle Gorge, along Rock Castle Creek. I just got some of the photos off the camera and wanted to share them.

When I got back to my car at the top, the sunset was spectacular, and I took many photos as the light faded. Put the best together into this montage series of a sinking sun. 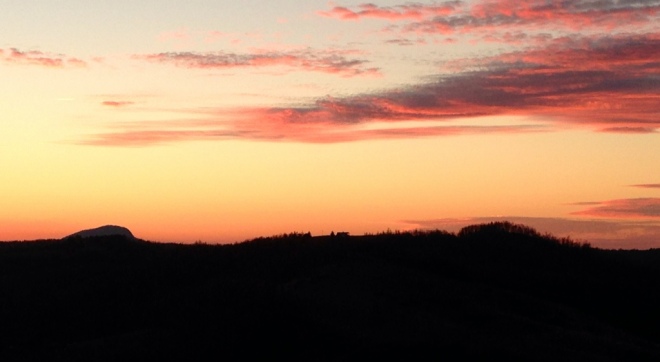 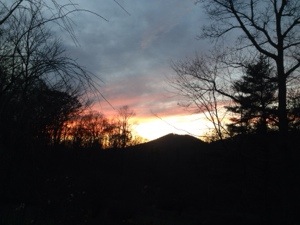 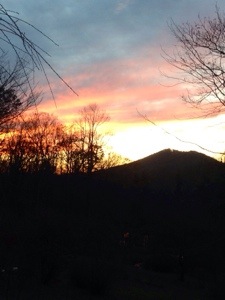 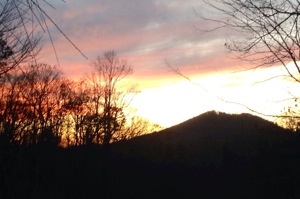