We got significant unexpected rain in the night, with colder than predicted temps. With our mummy sleeping bags and the propane furnace set on 50 we slept fine. When we got up, it was 32 and the dawn was red and fire-like, but the clouds rolled in, and then rolled away again.

We all walked down to our hoped-for boat launch camping spot, to watch the tundra swans get up off the ice and fly overhead, on their way to the feeding grounds. For the most part, these thousands of swans in a couple of groups were the only birds out there. Some were merely standing on the ice and others were floating in small patches of thawed water. There were also some small, short-necked, dark-colored ducks in patches of water. 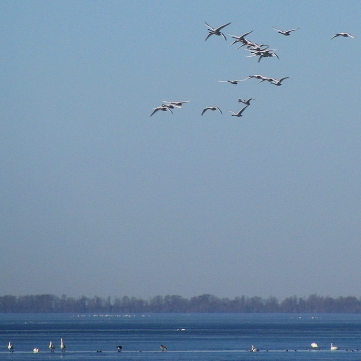 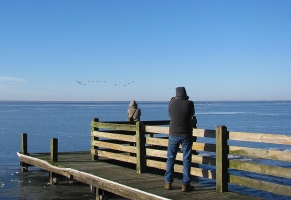 Barbara and Mike watching/photographing the swans as they moved from the lake to their feeding grounds.

Thousands of swans make quite a racket, even from this distance.

Their long necks replicate the high flute-like pitch of their calls.

Our plan was made while we watched and took pix—we’d use Mike and Barbara’s vehicle that had on-demand four-wheel drive, because we thought we’d be headed out into muddy tracks trying to get to Pungo Lake, and to a spot across Phelps Lake that was recommended to us by the ranger: Cypress Point.

After breakfast and unhitching, we all piled into their car and headed out for the day. Our first stop was Moccasin Point Overlook, which extends into Phelps Lake only a few miles away from Pettigrew. To access the dock, we took a lovely raised walkway through a cypress swamp—where Mike, Barbara, and I had hiked the last time we were here. We did not see the many, many ducks we’d seen last time, but we did see a pair of woodcock, a very bold squirrel, and just enjoyed the walk and the scenery, even though there was quite a lot of snow. In that snow we saw tracks of all sorts of critters, including the deer we later saw in the woods (but I was unable to capture on film). 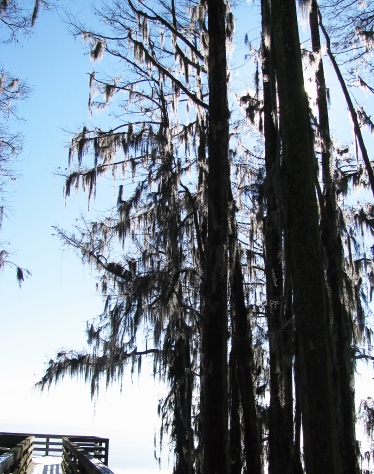 Ice on the Spanish moss dangling from the cypress trees @ Moccasin Point.

Checking out the critter tracks in the snow.

Cypress knees in the ice of Phelps Lake. 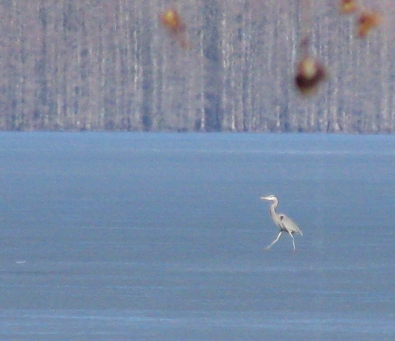 Next, we drove to Cypress Point (another Phelps Lake overlook), which had a small boat (kayak, canoe) launch area beside the dock. It was a lovely overlook, with benches to enjoy the view—but contrary to what the ranger said, there wasn’t a migratory bird anywhere in sight. We did, however, see two bald eagles. That was special.

By this time, it was about 1PM and Mike was pretty hungry, so we fetched our lunches from the car and sat on the dock to eat. We were all pretty stiff by the time we’d finished, and several of us had sat too close to the melting snow on the step, and got our bums wet. It was a very nice temp, however—maybe in the high 40s—and with little wind we were quite comfortable and relaxed. It was also quite sunny, those AM clouds having dispersed, so by the end of the day, both Barbara and I felt a bit sunburned.

Next, we headed around to another overlook on Phelps Lake: Pocosin Overlook, in the Pocosin Natural Area. There was a strange elevated platform that you accessed via steep, narrow (icy) steps, and when we all climbed up there, far away across the pond, we saw an enormous cloud of white birds lift off and swirl around — it was similar to a murmuration of starlings, but low over the ice/water, no higher than what could be backed by the trees on the far side. It was truly extraordinary.

Trying to get to Pungo Lake is a challenge—many roads are closed seasonally, and there’s simply no easy way to get there. We all though that if Phelps was mostly frozen, then for sure, Pungo would be a sheet of ice (it’s smaller than Phelps) but surrounding Pungo are many open fields, some left unharvested for the birds. So we drove around, trying to get to where we might see the sea of birds we’d captured last year.

One final turn that happened to be along Pat’s Road, where we had ventured last time, and LO! We saw millions and millions of birds, covering the partially-harvested corn fields on either side of a muddy road, out of which another vehicle full of bird watchers emerged as we arrived. So we turned right and met the mud.

Wow. We were breathless. The birds appeared to be in nearly-overlapping but separate groupings of tundra swans at one end and snow geese at the other. While they sometimes seemed to mingle (at least in the air) there seemed to be an agreement among them about whose end was whose. The geese had youngsters with them—we were able to distinguish them because they were gray.

Mike and I walked into the field (followed a bit later by Barbara) but our only photographic options to capture the snow geese were to the west as the sun was setting, and too bright for photos. We took a lot of pix of the swans. Far to the north, we heard hunters, presumably hunting geese or ducks. 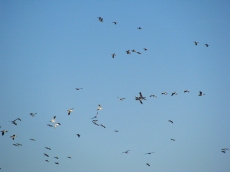 Mike photographs in the field of birds.

We watched and listened for a long time. Jack stayed back by the vehicle, and at one point an enormous gaggle of snow geese flew right over his head, and settled near the road, in another partly-harvested cornfield toward the north (but not near the hunters, rather, still within walking distance of us). 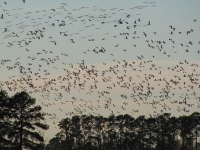 As the sun set and our hopes for a mass fly-off dimmed, we re-gathered at the vehicle. Barbara’s feet were cold, Mike had stepped into a water-filled, snow-covered ditch and his feet were wet, and we were all getting tired and hungry. We had parked with the nose of the vehicle pointing north, along a small, muddy side road, along which lay the field where the geese had settled. So we thought we’d get closer by driving straight along. We were not actually able to see the geese better from that vantage, after all.

A couple of trucks met us, and there was absolutely no where to ease to the side without going into the cultivated field, frozen below with a skim of mud on top. So we backed nearly the whole way out, until a wide grass verge allowed us to pull off for the trucks to get by. The first one passed and waved, and the second one stopped and informed us that this and the other mud road were seasonally closed, even though there were no signs indicating such. So we apologized, wondering if he was a ranger or a hunter, and (since we were on our way out anyway) promised we’d exit post haste.

Then we stopped on the paved road (not closed seasonally) and took some more pix of the geese that were packed right next to the road, madly feeding. I was in the back and the photos I took of the snow geese and their gray youngsters came out blurry since I had to take them through a fixed window. Too bad, because we were very close.

Managed to work our way back toward Pettigrew by “going around our elbows to get to our thumbs” as Jack characterized our route, and since dinner was on our minds, we navigated into Edenton, where we were sure to find a restaurant. A place J&I had gone on one of our NC bicycle rides was the Waterman’s Grille, so we aimed for the downtown/waterfront section and parked. That place was closed for their winter break and clean, so we tried something called Bistro 309. Lovely little place, that it seemed everyone in town was patronizing that night (on a Tuesday?) but we didn’t wait long for a seat or service and had an excellent meal. Drum fish was one of the specials, and everyone got that except yours truly, and I got fried flounder. Everyone’s meals disappeared with a nice glass of wine (except Mike, who was driving) and then we endured the long drive home, tired and well-fed, satisfied, and imagining flocks and flocks of large, raucous, white birds.