En route from Waterhouse CG in VT on July 9, we took a really lovely drive through the Adirondack Mountains, with a stop at an odd little town called Speculator to get lunch and fuel. It is evidently a spot for sports (mainly winter sports?) and tourists, but we found a bakery/café serving to folks outdoors, and we had delicious sandwiches on home-made ciabatta rolls outdoors under an umbrella. While the breeze was blowing, it was quite nice. But, being near the traffic and the heat of the pavement, when the breeze eased it was hot. The café’s restrooms were not open, but down the road a bit were public restrooms maintained by the local fire/rescue dept., and we noticed a street market or craft fair in the adjacent community park—in which, while it looked interesting, we elected not to immerse ourselves.

Our site at Green Lakes SP in New York was along the edge of an open field off a very narrow (one-vehicle-wide) road. An enormous group of folks who somehow knew each other was taking up the entire bathhouse end of the loop with tents, 10 x 10s, party areas, piles of firewood, corn hole and darts games, etc. They were having a decidedly big time. And cooking some really aromatic, delicious-smelling food. 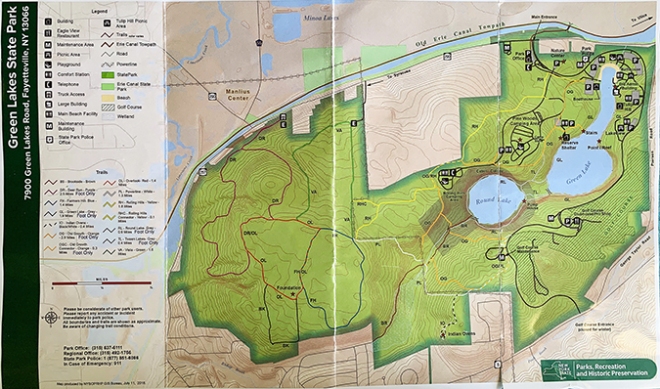 All the sites in this area were unserviced, and while there was a bathhouse dishwashing station, with the mobs of folks in tents everywhere, we did our dishes at the camper because there was always a line for the dishwashing sink. Any of the sites could be either RV or tent, and some overlarge rigs crammed themselves into the mix.

Visitors with tents were on either side of us throughout our stay, although the families changed through the duration of our stay. Our site was (mostly) under 4 old, gnarly cedar trees, and they were the only separation between us—some sites had no separation at all. 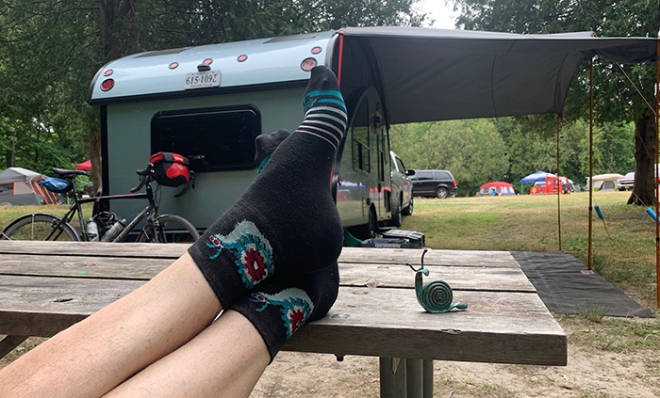 Behind our Alto, however, was a dense wood with hiking trails, and one of the access points to the trails from the loop was off our site. The path, however, was narrow and threaded (badly) through tall poison oak. So we only ventured that way once. 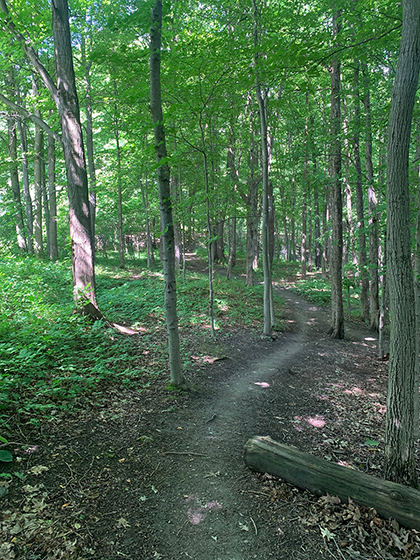 Each of the succession of users on one side of us had very young children. The last family to our other side also had tiny tots. So between the kids racing around, riding their bikes, crying and fighting with one another; and the block party going on between us and the bathhouse (when we had to go down there it was like running a gauntlet); and considering the oppressive heat of our stay, it was a very good thing we could run the generator to handle the AC and have some noise exclusion. Generators had to be off by 10, but once we’d charged the battery and the sun had gone down, our trusty ceiling fan managed the overnight noise handling like a champ.

In 1973 Round Lake and 100 acres of surrounding old-growth forest were designated a National Natural Landmark, becoming our nation’s 182nd such area. This designation is “reserved for resources the are sensitive and unique, and which represent the natural heritage of our country,”

The NNL Program, administered by the National Park Service (NPS) recognizes unique landscape features in both public and private ownership. Prior to designation, scientists inventory, evaluate, and review an area multiple times. Property owners are notified at each stage of the process—involvement in the NNL Program is voluntary, and designation does not include land-use restrictions.

The NPS assists involved landowners with conservation efforts and periodically monitors NNL areas to identify damage or threats to their integrity. The program’s goal is to foster the public’s appreciation of and concern for the conservation of the nation’s natural treasures.

Both Green and Round Lakes—the latter of which covers 34 acres and is 185 ft deep—are of national, ecological, and geological significance due to their glacial origin, *meromictic (non-mixing) character, and (especially Round Lake’s) the adjacent old-growth forest. This forest, which has abundant bird life and some of the oldest trees in the county, lies primarily southwest of Round Lake.

Round Lake’s partner is the equally rare Green Lake. *Meromictic lakes do not have the normal lake characteristic when the levels of water (surface and bottom) mix during different seasons. Such lakes have a high potential for evidence of ancient plant and animal life. There are only a few such lakes in the US.

Due to this sensitive nature, neither Green nor Round lakes allow outside/private boats, kayaks, or canoes to be used on the waters. There are, however, rowboat and kayak rentals available on Memorial Day from the Boat House.

Green Lakes became a state park in 1928 when NY purchased 500 acres surrounding and including the two glacial lakes. Through purchase of additional lands, the park is now 1,756 acres, and includes an 18-hole golf course designed by Robert Trent Jones. It also includes over 20 miles of hiking trails (although none are designated for bicycles, despite being used as bike trails by some visitors).

More important to us, anyway, is the park’s proximity to a long rail-trail that is part of the Empire State Trail System, called The Canalway Trail. 36 miles of this trail makes up the Old Erie Canal State Historic Park, and one access point, about 5 miles from the western terminus in a suburb of Syracuse called DeWitt, is across the road from the registration/office for the park.

Not knowing much about the trail at all, except that it followed the old canal towpath (and had very little if any grade either way, contrary to most rail-to-trail conversions) we hoped to ride the entire length of the trail during our stay. We pretty much discounted heading to the western terminus, as we really didn’t want to ride to or through that large city.

So on Friday, July 10—the hottest day we had yet to experience on this trip (squeezing the mercury into the 89-91 degree range)—we set out to “ride to Italy” by heading east on the Old Erie Canalway Trail (for more about the history of the canal and interesting tidbits about its construction and importance to commerce and travel in the region, there’s a “history” section at the end of the second part of this 2-part post—to skip ahead for that part, click HERE and scroll to the “history” section). It was, indeed, fairly flat and we headed toward Rome, NY with every good intention.

And we saw many neat things along the way (none of which I got any photos, of course):

We also saw Canada geese too numerous to count. They evidently, were late-sleepers as they were just crossing from their breakfasting grounds back to the canal when we passed their gauntlet (a stretch of the path at least a mile or so long) around 10am. As there were youngsters included, the adults all hissed at us passing through their gaggles, but none tried to take bites out of our ankles.

There were also many reader boards along the way, enlightening us about the length, age, and history of the trail. Too bad those bits of info were not available before we headed out.

When we reached mile 25 and had still not made it to Rome, we reconsidered our goal. Committed at that point to a 50-mile day, we reversed course and ate our packed lunch in Verona, at a public park near this mural that was so long I had to take it in two shots:

The geese were mostly gone on our return pedal, except in one place, where a pair of (among many) motorized-vehicle-excluding gates demanded that we weave our bikes through a tight zig-zag. But the geese appeared to have different ideas about our vehicles, watching our approach ominously, gaggled at the Z. Jack commented, “Guardians at the Gate.” You just gotta laugh, even if you’re so hot and tired you can hardly turn the cranks.

We were able to get some electrolytes by buying huge bottles of Gatorade and to refill our water bottles, at a small convenience store somewhere along the way (several of the canal towns’ names began with “C” and we tended to confuse them all). Which probably saved us from suffering heat exhaustion or dehydration. By mile 40 we were both seriously sagging and I was offering Jack options for him to stop and let me come back with the car to fetch him. Yet we were both still sweating, our skin was not abnormally cool, and we did not really think we were in any heat-related danger. We were just, plain, tired.

And we made it, with the final hope that the park office would sell us some bottles of water to sustain us up the final, sunny, uphill 3/4ths mile to our site. While they did not sell water, they said, “The state has allowed us to open up our water fountain and it’s refrigerated. Help yourself.”

I did so, and we sat on a bench at the bottom of our final hill until we felt slightly human again, and chugged up the hill to site 134. What a day:

This post has been broken into parts to make the upload easier. To continue learning about our Green Lakes SP adventures, please click HERE for Part 2.