Colder night (30 degrees) than expected, but all of us slept well. I was out on the boat launch dock by about 6:45A and the others came around 7:15 or so. There were lots of swans in more-or-less the same configurations as the day before, and as the sun came up, their noise levels increased. We noticed many, many more different kinds of birds today compared to yesterday AM. Gulls, many differing types of ducks, herons, and, far far away near the eastern shore, two bald eagles fighting—one stayed put and, noting by his body language and movements, was eating a catch I couldn’t see even through binoculars. The other came and went, harassing the lucky eater to no avail. I heard their cries at one another several times when the interloper would come calling and get rebuffed.

It was well past 8 with the sun shining brightly (and warming things on the dock) when the swans began moving off the water. After a while, we all decided to get warm at the campers, have breakfast or coffee/tea. It was colder in the parking lot closer to the still-deep snow than it had been out on the dock.

After breakfast, we readied ourselves to head to Mattamuskeet Lake Wildlife Refuge, and over Alligator sound to another refuge. Jack drove the gang today, and we left around 11.

The bridge over the Alligator sound/river is closed for repairs starting today through about January 19. The detour is not quite 100 miles—awfully glad I don’t live around here (or need to deliver packages to those who live around here) because that’s an enormous distance to add to a commute or delivery.

In our meanderings we took some side roads, and discovered a lovely small inlet called Frying Pan. Mike and Barbara got all excited about this find because it looks quite good for kayaking, and even has a parking area and a boat launch to access the bigger water. Oddly enough, the parking area is off Frying Pan Road.

In our search for the road, we passed a juvenile bald eagle at the edge of a cultivated (but currently fallow) field. We missed our turn and by the time we passed the eagle again, an adult had landed next to it. We didn’t see any kill or other items of interest, but the two were just standing there, apparently in some sort of face-off. So that sighting amounted to 4 eagles for the day.

We got to Mattamuskeet and hopped out of the truck along the roads to see the small ponds/wetlands around the visitor center, and saw many and varied species of water birds, including tundra swans. We did not spot any snow geese but saw Canadas, and among the ducks and other waterbirds, we noted pintails, goldeneyes, teals, scaups, coots, and more. Not many mallards, no egrets, but many great blue herons. 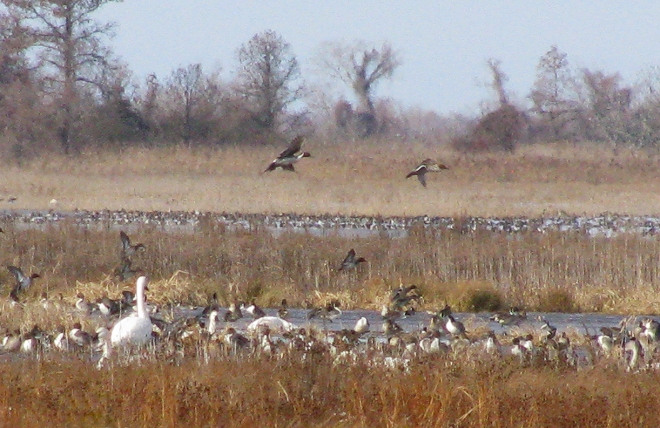 En route, we saw a mammal, long and slick, with a long-ish tail. We thought, before it disappeared into the water along the road, that it might be a river otter. We also postulated nutria, as we know they are here as invasives and pests. Jack suggested it was bigger than that, but smaller than a beaver.

As we drove closer toward the visitor center, we saw two nutria, which are significantly large, but not as big as what we’d seen earlier. One of the critters was right beside the road, nibbling on the stalks and roots of the water grasses that grew close to the edges of the water.

Inside the VC, we confirmed that what we’d seen earlier was a river otter.

Outside the window of the VC, we also saw a woodcock, merrily foraging in the lawn! One of the rangers invited us to her office to see more clearly, and I took a couple of pix there, then went around to the front porch and had the opportunity to take an even better photo. 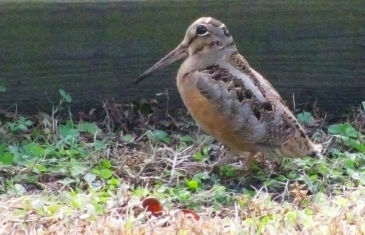 A group of elderly folks on an airport-style bus were there, too, and they crowded the poor woodcock (all the time calling it a wood duck) and finally chased it away. Stupid, ugly Americans.

There were a few picnic tables under the trees, but one was getting a bit of sun, so we had our lunch there. The average temp at the warmest part of the day was upper 50s, so we still needed a jacket, but it was a very nice picnic.

We spent a lot of time on the back side of the marshy area (called, oddly, Wildlife Drive) taking pictures of some great blues (one of which had caught a small snake, but carried it away into the wetland before we could capture a photo of it) and collections of diverse groups of species. The cacophony was higher-pitched, less volume, and more varied than we’ve heard with the masses of swans and geese we’ve encountered so far. Lots of small duck vocalizations. 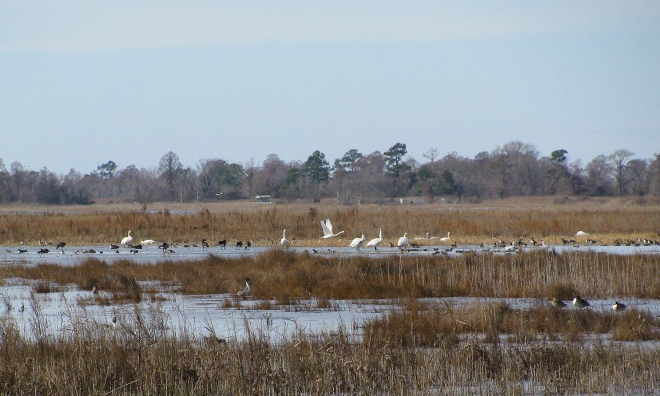 Nearly at the end of Wildlife Drive, we saw another adult bald eagle, sitting on a low snag. None of us had enough lens-power to photo it, but we all were able to see it through binocs. Without going back into the main drive to the VC, where there is hardly any passing space, let alone turn-around space, we would not be able to get closer to it.

Needing fuel, we mapped our way to a small burgh called Englehard, which (happily) was en route to our next destination: the enormous “void” on all our maps called the Alligator Wildlife Refuge, encircled by a “scenic drive.”

Refueled (they are very very proud of their fuel down here and price it accordingly) we found the scenic drive and it was long, flat, straight, and boring. Once we passed a couple of open fields that did not hold any snow geese or tundra swans, we were enclosed by pine forest, much of which had been burnt (intentional or accident?) and signs saying the area was a bombing range for a nearby military base.

Still hopeful to see something new or special on our drive, we did spot a gang of maybe 4 egrets sitting in a snag—big blobs of white in a drowned tree in the middle of a wetland. Passed by too fast to grab a photo, but it reminded me of the “hairy” egrets we saw while we were cycling around Assateague Wildlife Refuge last April.

Mike spotted another juvenile baldie sitting in one of the burnt snags near the road, sunning himself. So that made 6 bald eagles for the day. Later, Barbara spotted a mature redtailed hawk with a lovely white breast, just a little rust color up near its shoulders and throat, solemnly watching us stare at it.

Also along the way we saw many kestrels along roads with open fields beside them; and even a couple of merlins doing their hard-pumping thing over the fallow fields. I really lost count of the non-eagle raptors, because I was trying to see kestrels soon enough to point them out to Barbara, but we were in the back seat of the Honda (which is surprisingly roomy and comfortable) and I never saw them soon enough. We also saw a few red shouldered hawks, possibly 2 other redtails, and at least one Cooper’s hawk. Many, many great blue herons were spotted along the roads and near by in fields and along ditches.

Disappointed at not being able to find all the “scenic” or the “wildlife” around the refuge’s scenic drive, we headed homeward about 4:30, and with only spotty cell service, tried to find a place to eat that was different from where we’d eaten last time, in Columbia.

We thought Englehard had a marina seafood place, but were unable to find it by the time we reached there (about 5:30) so headed on to Columbia to the place we’d eaten before, in the Columbia Crossings Center (at the intersection of 64 and another major road, 94). While the food is as good as we remembered, it is a bit grody and the people are not very friendly. They were offering a fried chicken and “country steak” buffet, and a couple of specials, but we ordered off the menu, getting a variety of seafood. Tasty, but a strange atmosphere. Barbara overheard a conversation when some young folks came in as we were headed out, obviously looking for a place to have a beer (there’s a “tavern” next door and affiliated with this “family” place). The waitress evidently asked her manager, “Can I tell them we’re closing at in a half hour?” When the hostess demurred, she said, “What if they stay here drinking and chatting until after closing?”

That was the extent of the overheard conversation, but we were not impressed with the staff’s capacity (or willingness) to serve their customers.

Finally got home about 8P, after a 250-mile day. Jack and I cracked out the whisky for a wee dram before bed, and we read until about 9:30. Set the thermostat again for 50 and hit the hay. Forecast has changed from rain all day tomorrow to rain only in the afternoon/evening. We called Lacey (housesitter) to let her know we’re planning to hit North Bend for Thursday night en route home, and not arrive back until Friday. All’s well with the world (and with the tundra swans).