Enjoyed an uneventful border crossing not long after leaving The Pinery, where Ontario’s Sarnia turns into Michigan’s Port Huron across the border bridge. We asked the guidance lady in the Honda to take us all the way to Kalkasa, MI via a less-interstate-slightly-longer route (we’ve named her Mo, short for Miss Obvious Woman, as she tells us there’s traffic when we’re sweating it out in a construction zone going 4MPH; and when we’re Cadillacking right along she tells us the traffic is light. Doh). So it was actually a lovely drive with only I-75 as the speedy-but-boring part. We listened to more of the book we’d started on our way to The Pinery.

So it was maybe 4-4:30 when we got to Kalkaska—or actually just east of the community/town, and to the Kalkaska RV and Campground, a private concern run by friends of our housesitter, Dennis.

We didn’t have an assigned site, so Gail offered us the choice of 4 she said would probably suit us. It looked like we would be setting up in the rain, so we chose D-19, where one side looked like a pool without water, and there was a decidedly higher place for the trailer. The awning, however, is slightly interrupted by a couple of trees.

But the trees are lovely, the set-up was speedy, we were not too terribly chock-a-block with our neighbors (who apparently only sleep here as they’ve been gone all day), and we have the puddle-to-be (it did not rain significantly) to park the car. 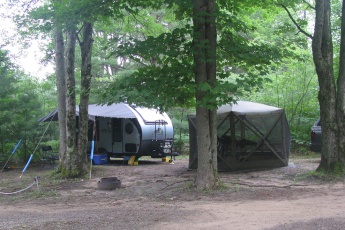 There is a site that we did not choose, however, that might be worth looking at if we’re ever here again: D-8. Gail had offered us D-7, which was low and uneven (someone was in D-8 when we arrived). But the occupants left during our stay, and by getting a better look at it, we’d choose D-8 instead, if it’s available.

We had a quickie meal of BLT sandwiches and chips, and called it a day.

We got rolling and jumped into the car to head to Travers City because it looked like the skies would open and the rain would again drench everything (it didn’t). We did a bit of online research to help us decide whether to take our bikes into the city or not. With the impending rain and seeing that the only “bike trails” in and around TC that we could find were decidedly urban riding experiences, we elected NOT.

The rain cleared and the day turned sunny and hot (low 80s), and we found a bicycling map at one of the best community visitor centers I’ve ever been to. The folks were friendly and helpful, and we came out with lots and lots of literature about not only Travers City, but Sleeping Bear Dunes and other areas up in this part of the world.

But TC itself was crawling with peeps, and lots and lots of traffic. It is a resort town, after all. I’m sure if we’d taken a stroll down the walk along the bay, we would have seen some nice marinas and beachy areas.

One of our purposes in driving to TC was grocery shopping, so we found a Lucky’s, which Jack remembered from the NABA trip we’d taken to Indianapolis/Carmel, and it reminded me a lot of Earth Fare—the new grocery in Roanoke. There were a few things we couldn’t find there, however, so we tried to avoid TC traffic and headed back to Kalkaska, where we’d seen a Family Fare store on our way out.

We finished our shopping and were quite hungry when we made it back to camp to fix lunch and prep all the food for our Dutch Oven Dinner of chicken thighs, a turkey breast (!!) and roasting veggies. We’d also gotten some frozen burger patties and some sausage patties that needed flat-packing for the freezer. Jack worked on a few “this-and-thats” around the trailer and truck, and I took up the blog updates again.

The campground is virtually empty and so very quiet! Nice change from The Pinery. The sun is shining and the breeze is just enough to keep the bugs (not that there are many of them) away. Lovely afternoon and evening. We cranked up the Solo Stove, but the rules said all fires had to be in the designated fire pit, so we started it on top (a bit aslant). 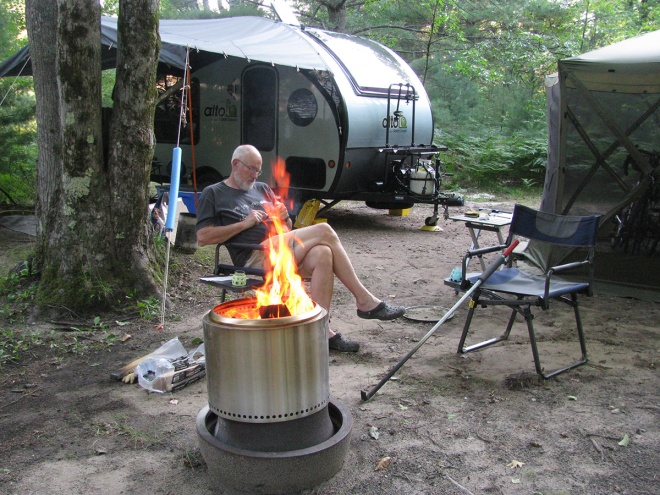 We found, however, that it was not drawing as well as normal, and the secondary burn that comes of the gasses burning at the top of the Solo was not happening. We weren’t sure why, but the only difference is it’s perch upon the firepit. So we moved it off and it gathered itself and did MUCH better. So if you’ve bought a Solo Fire Place, don’t mount it on a ring or other structure that might block the bottom holes from getting their air inflow.

The Dutch Oven cooking went quite well, with only an hour and a little before the turkey breast made it to 165-ish degrees, with all the veggies included in the pot (shallots, carrots, celery, potatoes). It was delicious, although the breast (which was boneless but had skin, and I cooked on top of the bone-in thighs with lemon slices between and on top) got a bit overcooked. But the pot likker was quite fine, and would make an excellent stew for us tomorrow, with the remaining meat cut up and included (with about a third of a beer to stretch the liquid). Very yum altogether. 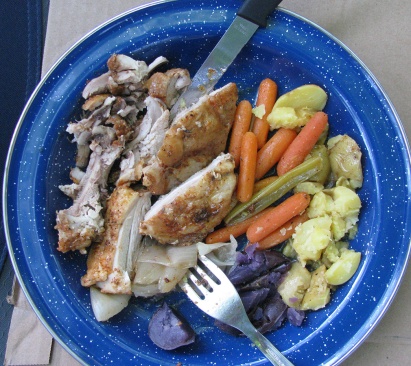 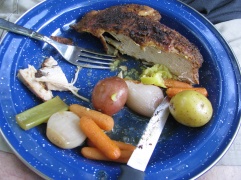 Part of the turkey breast