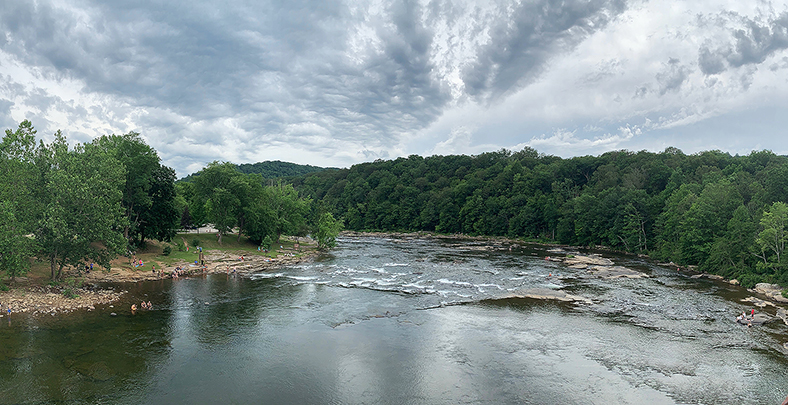 We arrived before check-in time on Sunday, August 2, at Ohiopyle State Park’s Kentuck Campground, so we got permission to head to the dump/water stations and empty/fill while we waited.

In the past, Ohiopyle—the village in the middle of the state park—along the Youghioigheny River (pronounced yak-a-GAIN-ee and called The Yack for short) and the Great Allegheny Passage (GAP) Rail-Trail, has been a favorite among our stops. We had never until this trip, however, been there in the “high” (read “swimming”) season. You can check out two of our prior visits, one without bicycles during 2015 here; and details of riding the Ohiopyle segment of the entire GAP on a wonderful ride during 2018 here.

For the curious among you, here’s a short shot of history about Ohiopyle:

Once called Falls City, this town’s economy has always been driven y the power of water. The name Ohiopyle is derived from the Native American word, “ohiopehhla,” which means white, frothy water. Once considered for the route of the Chesapeake & Ohio Canal, the Youghiogheny River here was clearly not suitable for navigation by barge.

The rural economy grew when the B&O RR came through in 1871 and later the Western Maryland, whose corridor is now the GAP trail. Ohiopyle thrived as a popular summer resort until the early 1900s, with thousands coming by rail from Cumberland and Pittsburgh.

Early industries depended on the force of water to drive machinery—now tourism based on whitewater rafting and other outdoor recreation drives the economy.

The entire Ohiopyle State Park is quite vast and includes multitudes of hiking trails, including steep grades, gorges, and cliff faces, all over the place. Not only hiking but also horse trails, snowmobile trails, rock climbing opportunities, special natural areas, and birdwatching and photography sites are included.

Along with the venerable GAP (starting in Pittsburgh and going all the way to Cumberland, MD) two of Frank Lloyd Wright’s famous constructions are nearby: Kentuck Knob and Fallingwater. Closings were strange for the two properties in the Time of Plague, but in the past, the tours were both worth the money. This time, John and Mary were able to tour Kentuck Knob’s outdoor sculpture gardens, but not the house’s interior.

But I get ahead of myself.

En route, Jack and I noted a slight issue with the wireless brake connection from the car to the trailer. Well, it was more than a “slight” issue—there was no connection between the trailer’s brakes and the car’s. Normally the controller is able to proportionally brake the trailer in tandem with the car’s braking pressure/strength and help ease the load on the car brakes.

So we took it slowly and carefully until we could figure out what the issue was (having fiddled and plugged/unplugged everything we could think of when we stopped to try to find the trouble ourselves).

As we were parked at the potable water station (one of the bath houses) John and Mary pulled up, also too early to set up, so we all stayed near the entry gate per instructions, and chatted. In addition to John and Mary, their dog Riley was a welcome sight and he was happy to receive our scratches and pats—possibly a bit over-enthusiastically on our part, since we’d been dogless for so long.

J & M had the farthest to travel, so we’d earlier promised them a hot dinner on arrival night—a chicken pot pie cooked in the Dutch oven. After basic set-up, I got to work on what I’d started the day prior (chopping and sautéing veggies) so we would be able to eat before 9pm.

The two sites we reserved (electric only—225 & 226) were off to themselves, quite near two bath houses—the one at which we filled up our water, plus one serving the Ivy and Juniper loops.

Having arrived on a Sunday, we were hopeful that most campers would have left for the week. But an enormous group (from their dress it was obvious they were a religious group) easily took over both bath houses when it was shower time. Not a one of them of any age wore masks, and it was impossible to use the facilities when the gang was all there. Happily, they had an outdoor hymn-singing Sunday night, and most were gone by noon on Monday.

After our delicious dinner (even if I do say so myself) we enjoyed an International Space Station pass over our heads Sunday night. It was a great day (except for having to share space with such a large no-mask contingent).

Monday, August 3: There must be a Cooper’s hawk nest or roost near our sites. I heard one of them moving through the woods overhead, and then watched as it and another gained lots of height to soar off into the distance. Monday mornings have been our health-check times, but we were unable to get the pulse oximeter to work—it just would not recognize that our fingers were actually in place. But we took our temps anyway, which were both normal for us.

Later, we heard from a nurse that the sensors get filmed over, and need a wipe with rubbing alcohol now and then—we did that the following Monday, and it worked again (yay).

It was a morning for everyone to manage chores: Jack worked on the electrics for the brake controller; John sought 2PM tickets to the sculpture gardens at Kentuck Knob; Mary had a friend’s logo project to work on; and I got the bikes off the rack, pumped tires, and lubricated chains. After that, I took a short tootle through all the loops of the campground, putting about 3 miles on the odometer.

It was another beautiful day, with morning temps around 75. Jack finally re-paired (repaired) the wireless brake controller. He could tell there was a connection, but we waited until departure to calibrate it again, once the trailer was re-hitched.

Jack and I drove the bikes to town to ride the Ohiopyle to Confluence leg of the GAP (while J & M went to Kentuck Knob) and we found the village to be absolutely mobbed with “waterbabies,” as I’ve come to call those people who disregard The Time of Plague in favor of pretending this summer is just like all others before, and they can swim, raft, eat ice cream, shop, and party like it’s 2019. The photo below of “waterbabies” doesn’t depict the gobbets of people along the shores above and below the bridge from which the shot was taken (nor the # of people I had to avoid on the bridge to take the shot).

It was an extremely rare sight to catch a mask on anyone’s face. Piles of people were picnicking and visiting along the shores of the river, standing in lines to get into a pub or to buy a summer treat; swimming in the river, or on a float trip or raft trip with 12 other people; and gathering in large clusters, without masks or social distancing, everywhere we looked.

We rolled our bikes through these crowds (wearing our masks) to get to the trail, and hared it out of the “stupid zone” along the more distant reaches of the GAP. Once we were free of the mob, it was a fantastic ride.

Unfortunately, I bumped the “off” button on the Cyclemeter app and missed calculating/recording the entire first 10.5 miles of our 21 mile ride. The good (interesting) part of this omission/accident is that the outbound half was upriver (ascending) and the return ride was downhill (descending). So I managed the highest average MPH I’ve ever ridden for the final 10.5 downhill miles @ 15MPH. Jack, who got both directions, logged a nearly 14MPH average, which is still a great spin speed. So I’ve adjusted my record to reflect his, as we rode the entirety together.

We cooked pizza on the grill’s pizza stone for dinner, shared the meal as usual with appropriate distancing with J&M (&R), and it was too cloudy to see any stars by the time we turned in.

On Tuesday, August 4 the rains came and went all day, and the humidity was brutal. Everything felt wet, even inside. We had leftover pizza for lunch, and enjoyed a visit from fellow Altoistes, Corde and Ray, who live about an hour’s drive away. We had a thoroughly enjoyable afternoon of chatting about this and that, even though several downpours chased us all scuttling like crabs (with our chairs) under the awning. It was a little “tight” under there for four, but we managed to stay distanced from one another and not get terribly wet during the rain.

The more it rained, the chillier it got, and by the next morning (our departure day) the low was 60 degrees (!!).