Jack and I stayed two nights in the Charles C. Deam (yes, that’s supposed to be an “m” not an “n”) Wilderness area, 13,000 acres of the Hosier National Forest in Indiana. The campground we stayed in Sunday, July 31 and Monday, August 1—Hardin Ridge State Recreation Area—is one part of the Wilderness area that was designated as such in 1982. The entire area is managed to preserve a natural condition and provide opportunities for solitude.

The campsites are mostly level and actually better-maintained than the above description might lead one to believe. The really noticeable aspect of this being a wilderness area is there is quite a lot of greenery and un-tended space between each site.

On Monday, it was raining, so we decided to head into Bloomington to do some shopping. A nice bridge or causeway spans the enormous recreational lake adjacent to the area, Lake Monroe. It was fun to drive through Bloomington, because one of our fave movies is Breaking Away, a cycling story set in that college town. We did our shopping but it was still rainy or threatening rain, and this was my “send off” dinner night (before I went to Indianapolis/Carmel for my business meeting). So we endeavored to build a campfire in the intermittent rain, and had some success. Grilled steaks with fresh corn on the cob and portobello mushroom caps (also grilled—Jack was the chef of the evening) were yummy.
It finally cleared up enough for us to sit by the fire to finish up our wine and the day.

We took a bike ride Tuesday morning, before I had to head north. We rode all around the campground and rec area and logged 12 miles by following all the loops, and heading all the way down hill (a rather steep grade, at that, which was delightful heading down, but somewhat of a chug climbing back up) to the beach and public access area for Lake Monroe.
Our observations, having seen the 4 or 5 loop areas where camping is permitted (plus one section where there are just a couple of cabins) indicated that the first two loops closest to the ranger station are the oldest. The shower/restroom structures in these two loops are the oldest. While they are certainly clean, the fixtures and structures themselves are showing quite a lot of wear.

The loops farther away from the ranger/check in area appear to be newer facilities. Not all—in fact, relatively few—of the sites have water hookups on site. There is a wide variety of electric, however, but also many areas where walk-in camping sites for tents are available, and even sites that have tiered levels for tents and RVs, and primitive RV sites with no hookups.

A person can find most anything in this camping area, and the managers and rangers are all quite nice and helpful, and (at least at this time of year) there is hardly anyone using the entire place. We might have seen a total of 12 users other than the camp hosts on each loop. Of course, it was Sunday/Monday, and one of the folks said that school starts hereabouts in a week or so. That might have something to do with it being relatively quiet.

There are lots of trails for all types of uses—hiking only, multi-use, equestrian. And among the materials about the area the Rangers hand out when you register is some interesting history about the Hickory Ridge Lookout Tower, which I’ll reproduce below, for those of you who like local lore as I do. If you don’t want to read about it, you can skip that part.

With the rain and humidity came the flowering of rather amazing fungi. I loved all the shapes and colors, so I took a few photos to share. These were all around our campsite and all totally amazing. 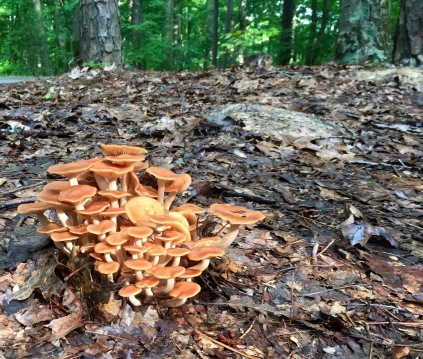 We left around 1PM for the ride to Carmel and my convention at the Renaissance North Hotel. Everything you never wanted to know about beer will be my life for the next 4-5 days, although Carmel Indiana is reported to have some very fine bicycling trails so I will also be exploring those if the weather cooperates. 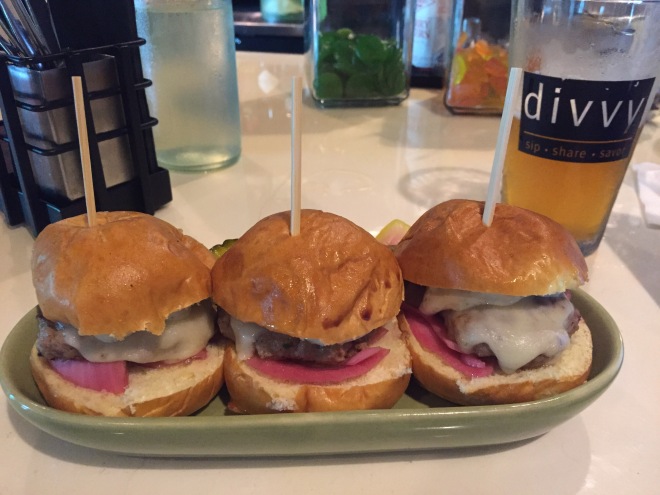 This structure stands guard over the Charles C. Deam Wilderness area, the last lookout tower remaining in the Hoosier National Forest. Built in 1939 by the Civilian Conservation Corps (CCC), it was manned and used for fire detection until the 1970s. It is 110 feet tall, made of steel, with a 7 share foot cab and 123 metal steps.

Early lookouts were simple perches in the crowns of tall trees, or mere ladder steps nailed to a tall tree so someone could climb up to look around. By the 1930s, however, the design for lookout towers had become uniform. At their peak, there were 5,060 towers in the nation, eight of which were in the Hoosier National Forest.

Inside the cabin, entered through a hunger trapdoor in the cabin’s floor, was an alidade on a podium. The alidade was a circular map with the fire tower’s location in the center, and compass directions around the edge (it has been removed from this tower). Attached to the map was a swivel range finder with a sighting wire. When smoke was sighted, the tower man lined up the sighting wire with the smoke, and by plotting the intersection of the lines of sight from different towers, the precise location of the fire could be determined. A telephone or radio could be used to report the fire and dispatch crews. It was common for the towers to be the first site in a rural to get a telephone or radio, and they often served as the community’s link to the outside world.

Raymond Axsom manned the Hickory Ridge Lookout for 26 of the years it was in use. Axsom stayed in the tower during periods of high fire danger. When he wasn’t on duty in the tower, he helped survey land lines, marked timber, routed signs, and did maintenance work on the Forest.

Axsom had a farm 2 miles from the tower and was hired in 1936 as the first tower an. He was replaced in 1938 and 39 by young men from the CCC camp who were assigned to keep watch. Axsom noted the young men kept falling asleep in the tower: a few fires got unnecessarily large because they were not reported promptly. So in 1940, Axsom was called back to be the lookout.

While many of the towermen were local farmers recruited to man a tower during high fire danger, at least two of the towers were “manned” by women. These were the wives of the men originally hired to do the job. According to Clarisse Carroll, former lookout in one of the towers, her husband just gave her the job when other duties called him away. “The rules weren’t as strict as they are now,” she said. “I never told anyone I was taking over. I just did it.”

During periods of high fire danger, a small crew of fire fighters was stationed at the base of the tower. If smoke was spotted, the crew was immediately dispatched to put out the fire. Axsom recalls periods when there might have been 4-5 fires a day, so the fighters were kept busy.

He recalls the wors fire in the Hickory Ridge area was in 1952. A farmer was burning off his garden plot on a windy day, and the fire got away from him. Before it was put out, the fire burnt 2,000+ acres and spread over ~6 miles. It was stopped with on a half mile of the Hickory Ridge Tower.

As frightening as the fire was, Axsom said the time the tower was struck by lightening with him in the top was worse. Still, he said he was the most frightened when an unexpected storm hit with high winds. Since towers had been known to blow over, he had quickly started down toward the ground. But the wind blew so hard he said he had to sit down and wrap his legs around the stairway to keep from being blown off the top.

Over time, the open farmlands around the tower have reverted to forest. Raymond Axsom is now gone, and the house near the base of the tower has been torn down. Today, the tower serves visitors to the Charles C. Deam Wilderness by offering them a panoramic view of the forest and Lake Monroe.