This post has been broken into parts to make the upload easier. If you missed Part 1, please click HERE and you can catch up before reading Part 2 of our Green Lakes SP adventure.

We took our second full day at Green Lakes (Saturday, July 11) as a recovery day, doing not much of anything except resting and drinking liquids. At one point, we got curious about the actual Green Lakes, and lit into the forest for a hike, intending to be on a trail that, on the map, indicated it would be no longer than about a mile around Round Lake.

The trail maps were extremely misleading, or the user-created “trails” in the woods are so numerous and permanent that newcomers (like us) believe we are on a mapped trail when in reality, we’re completely confused. Our under-a-mile walk, which was totally lovely, btw, turned into nearly 3 miles.

In any case, we got into the woods behind our site and trekked along high along a ridge above Round Lake. It was a nice walk, even though we were not near the actual lakeside until well into the hike when we found the mapped trail. 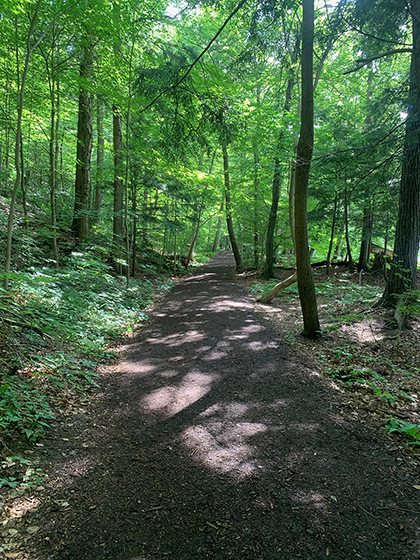 When at last we descended from the ridge to the waterside, both lakes were awesome. That strange emerald green color of the water distracted from its amazing purity and clarity, which could be seen at the water’s edge.

There were many un-masked people along the main, mapped trails, so we skedaddled back to the ridge and our campsite, and ran into this “Old Man of the Woods” on our way through part of the Old Growth Forest and back up to our high ridge. 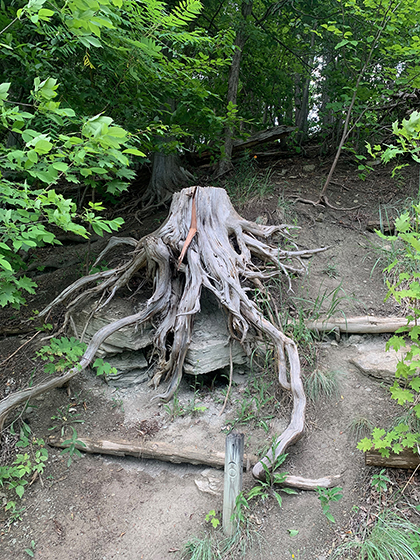 We had a good, satisfying dinner of grilled kielbasa & onion slabs, and fried potatoes. Several rain showers during the dinner hour ran folks indoors and under cover, but the showers stopped for a few hours. And that night there came an enormous thunderstorm, that dumped buckets of rain on all the partiers and tents—some of which collapsed under the pooled weight of water. There was quite a lot of nighttime activity with folks shining car lights and flashlights on wrecked picnicking and camping structures. It was quite a night.

On our second riding day (Sunday, July 12) we awoke to numerous drenched people forlornly cleaning up their soggy equipment and sites after the storm. It’s difficult to be humble, and I have to admit, we were somewhat self-satisfied with the security of our Alto.

As most of our camping neighbors left town, we drove to a deserted parking lot adjacent to a decrepit “living museum” area called “Erie Canal Village” west of Rome. There was a lone killdeer in the high grasses near the parking area trying to lead us away from its nest, and two hearty tourists determined to see what was to be seen in the “village.”

Which was not much other than this old canal boat, disintegrating in the canal below a pedestrian bridge that was closed to the public.

It was a cooler day, after the storm, which was a blessing. But it was nevertheless in the 80s.

We had elected not to pack our lunch as we knew there would be plenty of urban riding through Rome and in Utica, and thus places to grab a sandwich along the way. Rome routed us through some nice backroad neighborhoods, and there was only one section that was unpleasant due to traffic. On the return through that part, it began raining on us, and although it never got terribly hard (and there was no lightning) we got pretty wet on our hands and feet.

Anyway, we rode through Utica to the endpoint of the constructed trail, checking out one lock of the system along the canal: Lock #20. There was a lovely park where we could get into the shade and we snacked on a couple of Kind bars for energy.

After turning around and riding back from the east side of Utica to the west side, we stopped at a Citgo fuel station in Oriskany, where a Cliff’s Pizza and Subs was housed, and we had sandwiches built to order (like Subway, but with far better bread and toppings) and ate lunch outside at their shaded picnic tables. We ended up carrying half of one sandwich home and ate it with a salad for dinner.

Somewhere along the way, we saw this spillway from the canal to an adjacent creek and I thought it looked cool, so I stopped for a pic.

The rain had stopped by the time we got back to the car, and our killdeer was probably sheltering on its nest. We were glad to have New York’s Erie Canalway Trail to cross off our “done” list, despite having missed a small number of miles of its entire length. But it was a good couple of days’ riding and we were satisfied with the effort and the exercise.

The imagined/planned Canalway Trail System will offer hundreds of miles of scenic trails and numerous parks for walking bicycling, cross-country skiing and other recreational activities It parallels the New York State Canal System, comprised of four historic waterways: the Erie, the Champlain, the Oswego, and the Cayuga-Seneca Canals. The Canal System spans 524 miles, linking the Hudson River with Lake Champlain, Lake Ontario, the Finger Lakes, the Niagra River, and Lake Erie. When completed, it will be one of the most extensive trail networks in the country.

The Old Erie Canal State Historic Park is a 36-mile trail following the canal’s towpath from DeWitt (just east of Syracuse) to Rome (west of Utica). [We cycled the entire Old Erie Canal part of the Canalway Trail from the Green Lakes SP access point (~5 miles east of DeWitt/Syracuse) through Utica where the trail ends. It took 2 cycling days, one of which included driving to an obscure access point where we saw an ancient canal boat (shown above in post) in a decrepit “living museum” called the Erie Canal Village, and some significant (unpleasant) urban cycling.] This scenic trail passes through a variety of natural and cultural landscapes including open farmland, dense woods, and old canal communities. Originally part of the Enlarged Erie Canal that ran from Albany to Buffalo, this section now serves as a feeder for the New York State Barge Canal. 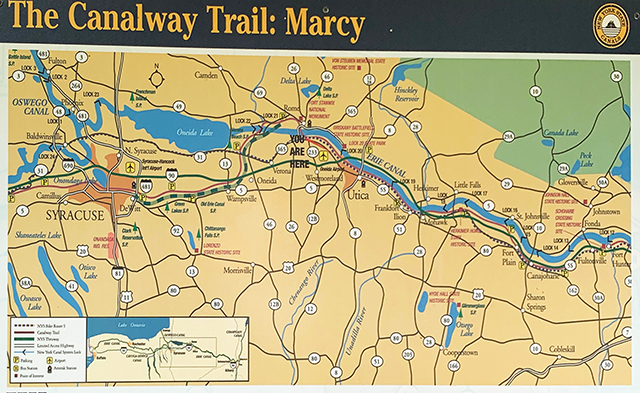 Workers began the construction of the original Erie Canal in 1817 on the flat Oneida Lake Plain between Syracuse and Rome. This section of the canal was known as the “Long Level” and did not require the construction of locks. Completed in 1825, the Eire Canal (then called “Clinton’s Ditch”) was an immediate commercial success, converting the Syracuse area from a swamp into a thriving commercial center. The initial canal stretched 363 miles, averaged 40 feet wide at the surface, and maintained a depth of 4 ft. It could carry 75-ton boats.

The Old Erie Canal State Historic Park encompasses all 36 miles of the Rome Summit Level, running from DeWitt to Rome. The park not only preserves this section of the historic canal but also serves an important purpose today, as this stretch of the old canal feeds today’s NY State Barge Canal System. The two canals join in New London, between Oneida Lake and Rome.

Increasing traffic soon made it necessary to enlarge and re-route parts of the canal. The “Enlarged Erie Canal” construction was begun in 1836 and finished in 1862 and was deeper (7 ft.), wider (70 ft.), and straighter than the original. In some places, the Enlarged Canal was built directly on top of the original. In other places, a new course was laid to eliminate unnecessary twists and turns. The Enlarged Erie could handle boats carrying 240 tons of cargo and decreased travel time.

The NY State Barge Canal opened in 1918, and the “Enlarged Canal” was abandoned. Today’s canal is a combination of artificial waterways and existing lakes and rivers. While it uses much of the original canal, it takes a norther route through Oneida Lake, bypassing the Old Erie Canal State Park. It is 12 feet deep and varies from 75 to 120 feet wide in the artificial channels.

In its heyday, boats traversing the canal transported both a diversity of people and goods. Many different boat styles traveled the canal and each was designed for specific cargo.

Packet Boats carried people. Each passenger was assigned a cramped sleeping quarter. Men’s and women’s quarters were often separated by a curtain. The men’s quarters doubled as the dining room and saloon during the day. Boat owners tried to pack as many people into the boat as possible, allowing them to charge less than a stagecoach.

Freighters transported a variety of raw materials and manufactured goods along the canal. A fully covered boat called a “bullhead” protected cargo that needed to stay dry (flour and grain). The uncovered deck “skows” transported goods like lumber and coal, which could be moved without protection. Raw-material cargo often traveled east towards Albany while manufactured goods typically traveled westward.

Line boats worked much like bus or rail lines today. Line companies stationed teams of mules in barns along the canal. Working mules simply switched with rested ones at the designated stops. The cabin space that would have been used for mules became available to human passengers who could not afford packet boat fare. Carrying both cargo and people was very profitable, and in the middle of the nineteenth century, line boats made up 50% of the canal’s vessels.

In the picture above is the Chittenango Canal, which supplied water directly to the Erie Canal from Chittenango Creek.

The Chittenango Canal Company built it in 1817. It collected tolls and maintained the more than mile-long canal, which ran to the southern end of modern-day Chittenango. The canal contained four locks, each raising the water level 6 feet. Sawmills, stores, and other businesses thrived along the canal until about 1852. NY State bought it in 1860 and portions were eventually filled in.

Where does the water come from?

If you clicked here from the middle of Part 1, this LINK will take you back there.

Otherwise, stay tuned for the travelogue of our next stop: Leonard Harrison State Park in Pennsylvania, and our rides along Pine Creek Trail.