Very cool here, but the wind has at last stopped. We slept very well (and a long time) under our blanket with the ceiling vent going on low for “white noise.”

Fixed coffee and tea, and Jack grilled some sausage patties that we enjoyed on slider rolls for breakfast. By about 11, we were cycling toward the “start point” of the mapped route Jack had gotten off the internet, called the “Crustacean Trail.” It purportedly began in Crisfield’s municipal park, which wasn’t much of a park at all, and we were to take Chesapeake Ave. to begin, the internet map said, “and follow the signs.”

No signs were visible either on posts along the way nor painted on the pavement.

We rode all the way into town, and stopped by the Visitor Info Center along the way, to get some advice and maps and recommendations from the nice lady there. Armed with all we might need to carry on, we rode down to the dock at the terminus of Main St. but still never found Chesapeake. No matter. We carried on, retraced our inbound ride, checked various maps, and at last got onto the route.

The sky was slightly overcast, the humidity was negligible, the temps were cool, and the traffic was nearly non-existent. We had a very fine day of cycling, with our ultimate destination being Westover, which looked like a pretty big “dot” on the map. We thought it wouldn’t be too difficult to find a late lunch there. 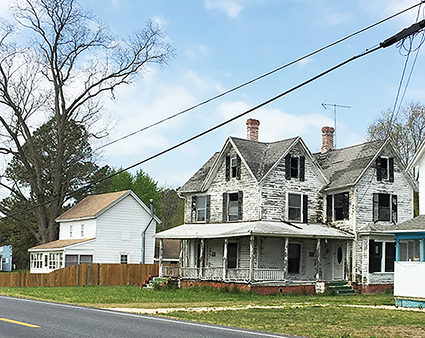 At just past one and 23 miles logged, we found Westover, and nothing but a couple of fuel stations, one with a no-name (I’m guessing a “Sheetz style”) foodery, and one with a Subway. We opted for the Subway instead of a microwaved hot dog.

Had a decent Subway sandwich, re-filled our water bottles, and headed on the return trip, but without all the gee-ing and haw-ing in Crisfield. There had been a loop we’d missed on the outbound run, that we collected during the return. Basically, the “trail” crossed Rt. 413 back and forth, and the entire route was quiet backroads on the east and west sides of 413. We certainly could have ridden 413, as there was significant shoulder and sometimes even a designated bike  lane, but that is a moderate thoroughfare and we wanted (and found) more calm and serene routes.

And, of course, the wind found us on our return. Not nearly so strong and steady as what we’d experienced the night before as we set up camp, the wind was nevertheless a significant presence along the return route. We took turns “drafting” for one another.

There were several really lovely stretches along the ride, especially one length of road that had hardwoods on one side and a tree farm of tall pines on the other, creating a tunnel effect. Many interesting homes and some derelicts that were equally interesting. I always wonder what stories derelict houses could tell, could they speak (or could I understand).

Along one stretch with a particularly deep pine farm situated next to a green-green field full of a cover crop that was about a foot tall, we heard the distinctive “bob-white” of a quail. Amazing. It echoed through the forest, and we heard it calling several times in sequence. I haven’t heard the call of a bob-white quail in years and years.

We saw some ducks and geese on a couple of inlets, and I spotted one American kestrel on a power line over a stubble field, but other than that, the birdlife we saw consisted of vultures. Lots and lots of vultures. We even saw one sitting on the top of a chimney that was still standing among the ruins of a fallen-in house. Another of his kin rose from the rubble inside what used to be the house as we passed, disturbed by our noticing and talking about its comrade on the chimney.

We also saw some lovely purple wisteria, some beyond-their-prime camellias, and all-in-all some very respectful drivers, offering us lots of room on the roads. The day was punctuated by the aromas of wisteria growing near the roads alternating with the peculiar and distinctive scent of poultry farms. And the occasional dead thing on the road or in a nearby ditch.

Despite the rather unpleasant odors mingling with the scents of spring, we had a completely delightful ride. Cycling stats: 43.5 miles; 12.6 MPH average, ride time 3 hours, 25 minutes.

Back at camp, we rested for a bit, took showers, and re-heated that leftover chili and baked dinner rolls from a couple of days ago. The sunset was just lovely over the water. After dark, we watched another pass of the International Space Station next to Daugherty Creek with the gang of next door neighbor kids and their parents and grandparents, and went to bed. 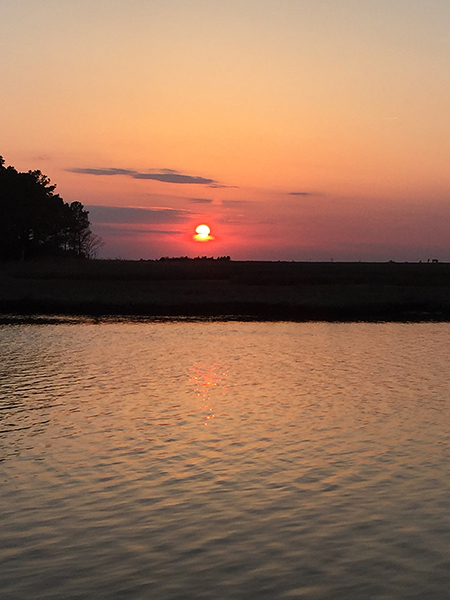 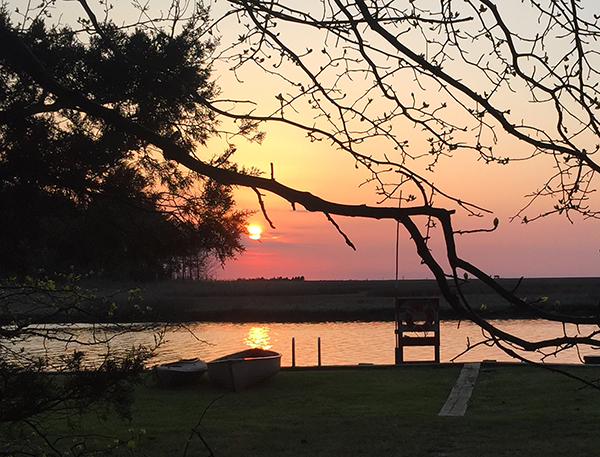 Tomorrow, we might take our bikes across (via ferry) to Smith Island, if the ferry runs and the weather holds. We’ll just have to see how it goes.

Did I mention the pollen? It collects inside, outside, all around the town. Kind of amazing stuff. Happy, we’re not suffering too badly from breathing yellow pine pollen all the time, although a bit of extra sinus stuffiness is evident.

Our plan to take the ferry today was quashed by the rather dismal forecast. We really didn’t want to be on a ferry nor stranded on a remote island when the predicted rains rolled in.

Instead, we decided to drive (not cycle) north along 413 and 13 (the main north/south drag along this stretch of Earth) to see what Princess Anne (small, historic but apparently atrophying town) might have to offer in terms of brunch or lunch.

There were some areas of the northern outskirts of the town that had some significant renovation of the historic homes going on. And the University of MD/Eastern Shore makes up a significant portion of the area.

Still, there were no eateries beyond franchises, even around the campus area. Lots and Lots and Lots of student housing, however.

So we moved on north to Salisbury, where it wasn’t long before we found a CRAFT BREWERY! 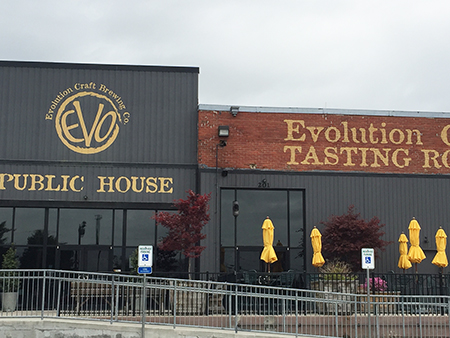 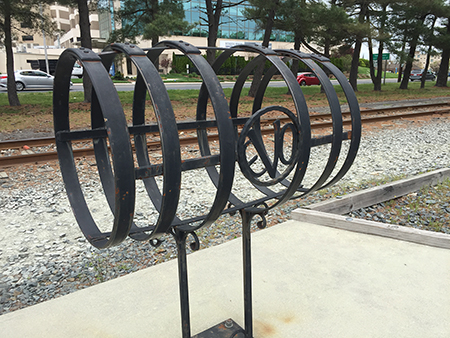 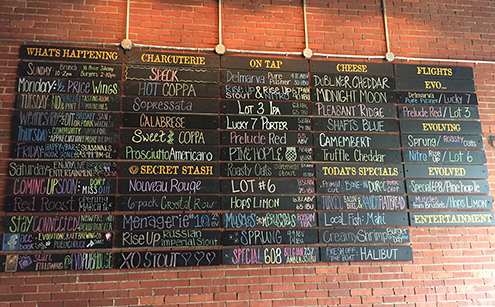 Yay. So we spent some time and $ at Evolution Brewery and enjoyed ourselves immensely. Jack wasn’t into drinking beer, and I couldn’t decide, so we got a flight to sample. 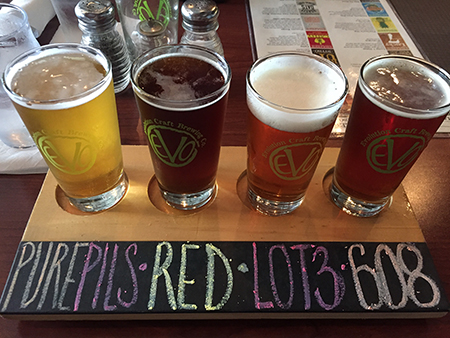 Really REALLY liked their No. 3 IPA, which was notable for holding its head. I thought of it as a cross between Get Bent and Fresh Squeezed, with more body than either. I saved that for last, and we worked our way through the others during our meal. Jack had a crab cake sandwich and I had a catch of the day (mahi-mahi) sandwich, both of which were totally yum. They had hand-cut fries to go with all their sandwiches, which were also perfect.

The Pilsner, I’d order again on a hotter day (it was quite cool, overcast, and blustery outside, and inside they must have turned on the AC because we were both chilly). The Red, neither of us cared for greatly, and the special 608 that the waitress said was her fave, was totally meh unless paired with food. Then it began to be toned by what you were eating and it was tolerable. 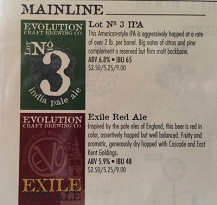 The No. 3 IPA, however, was truly good — in fact, we found some in a sixer at the Acme (used to be Giant) Grocery store, and along with some other necessaries, brought it home to chill at camp. 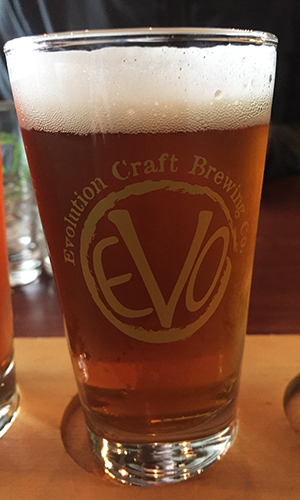 We found a seafood distribution company along the road coming back to Janes Island SP, and stopped to see if they sold retail, and they did, so we picked up two pounds of large shrimp to cook on the barbie when we got home. Fresh asparagus, rice, and grilled shrimp. It just doesn’t get any better than this. And we took our lovely meal in what Jack has come to call our “tree house,” which I hope is the new name for our screened room, where Jack has been spending a lot of time lately.

Good day — and it never rained, after all, except before we got up north (could see it on the roads). By the time we got back to camp, it was in the 70s and pretty hot. After dinner we watched another pass of the ISS, among a cloudy horizon, and saw a hint or two of a coming storm.

During our drive, we also saw our first two osprey flying around en route up north since we arrived in MD.

The storm hit with thunder and lightening after we’d hit the hay, and the rain came down hard for a nanosecond — not even enough to wash off the pollen from the car. Strange stuff, this ubiquitous pollen. 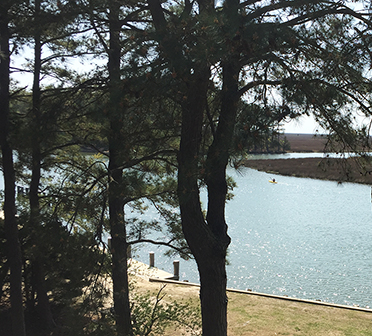