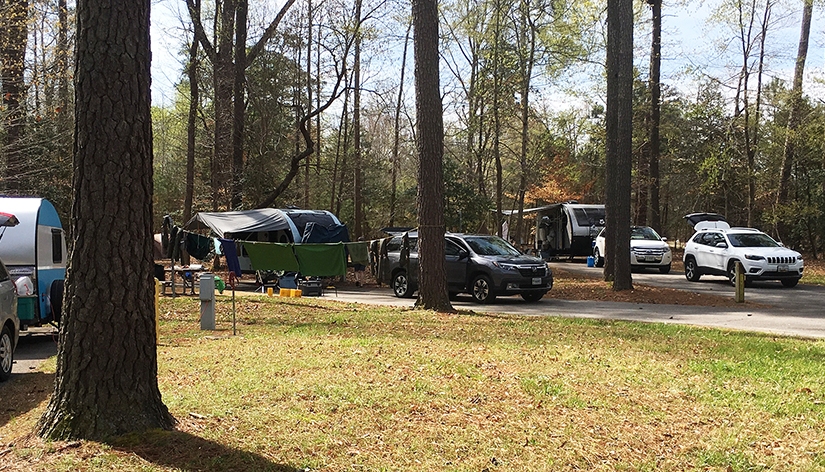 One last thing I forgot to mention as a big “pro” on the plus side of our Bike Florida Tour: Oranges.

All the rest stops had them in abundance, and they were cherry red, sweet, and O! so refreshing. So good, in fact, that we stopped at a roadside stand before leaving FL and bought a sack full. Yum. 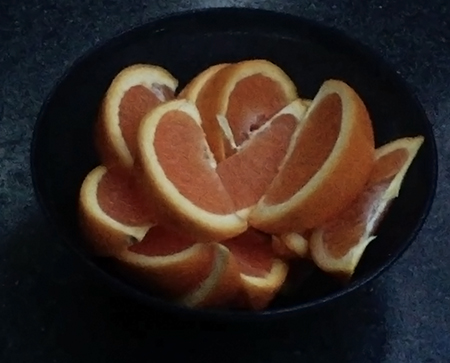 So we said goodbye to FL and headed to SC. Travel was unremarkable, thank goodness. But I did capture this pic of Angela and their Alto2114 traveling along ahead of us at one point.

So Lynches River Campground was our overnight spot on Thursday, April 4, and that’s the campground that is mostly for tenters, with only 2 serviced RV sites. Mark and Angela got #2 (a pull-through) and we got #1 both with electric and water. The bathhouse was rustic to say the least, but it had exactly two private rooms, each with its own toilet, sink, and shower. For a one-night stayover, it was just perfect. Next stop: Chippokes Plantation Campground near Williamsburg, VA, April 5 and 6. 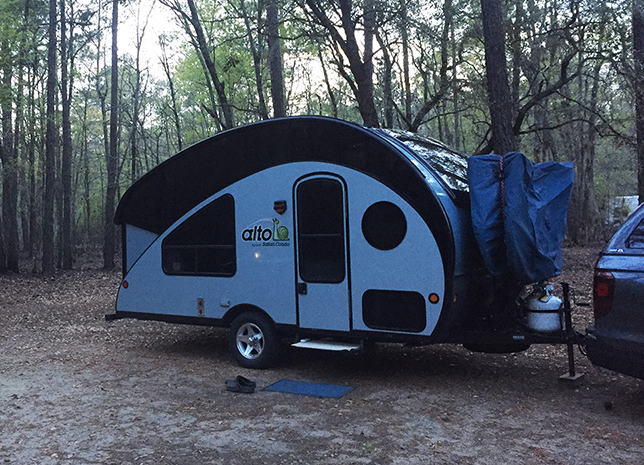 Chippokes is actually in Surry, VA, and is a re-purposed grand farm and mansion, once an actual plantation. Today, it is quite a fine and spiffy Virginia State Park, with hiking trails, the mansion itself, equestrian trails, electric and water, and nice renovated bathhouses. Loop B has the most modernized and level campsites, where Loop A has older, less flat/improved sites.

We linked up with John and Mary at Chippokes, so we had three side-by-side sites with Mark and Angela. Roomba was in the middle, on site #2.

Mark and Angela’s son, Brent, linked up with them (and us), coming down from New York to see his parents while they were relatively close. He spent some of our arrival/set up day in Williamsburg and he and Mary and John all arrived around 5PM.

We all went out to dinner, hoping to catch the pub in Smithfield, but there was a minimum of an hour’s wait there, so off we went to Smithfield Landing where we had a delightful dinner, and all got to know one another a bit better. The walk through Smithfield from the pub to the Landing and then back to our cars after dinner was fun times together also.

The next day, Mark, Angela, and Brent headed to Jamestown, while Mary, John, Jack, and I headed across the ferry into Williamsburg. But first, we went to the Edwards Ham store and picked up some good old fashioned Virginia Ham products. Yum.

We rode the Pocahontas ferry and saw a smaller ferry passing across the river. It was overcast the day we headed into Billsburg, but it never rained despite the look of the sky. 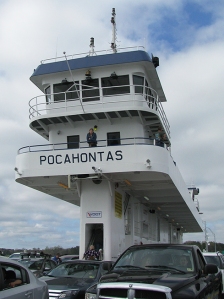 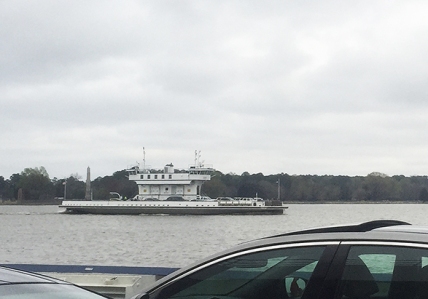 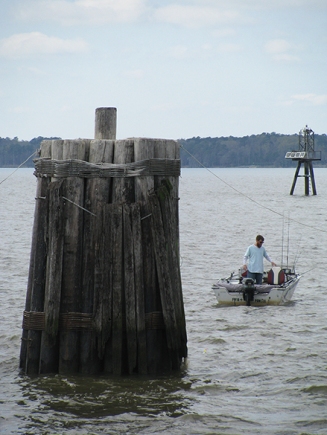 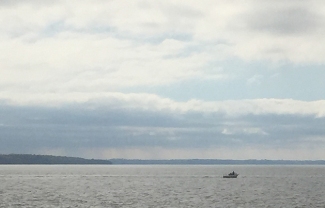 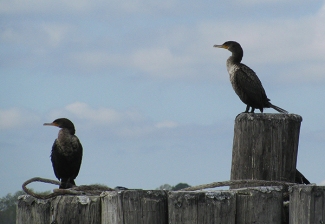 We had a bit of a drive around the campus, telling J&M tales of our college days, and had a quite nice sandwich from Colonial Williamsburg’s famous Cheese Shop. 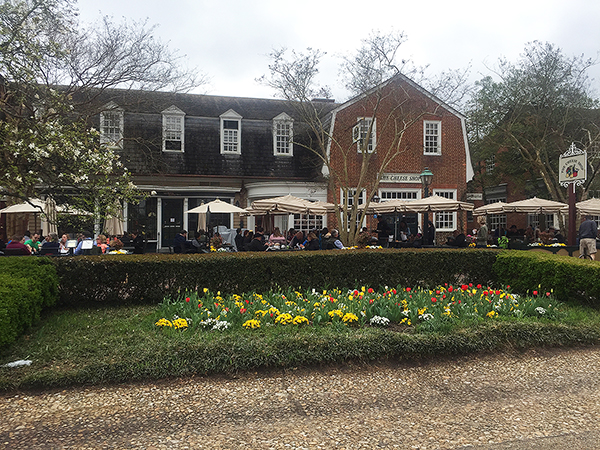 That night, we all fixed our own dinners but joined up to eat at our site. We had shared appetizers and a fire to cozy up to as our final night together after our fun travels with Mark and Angela. Brent also was headed back north the next day, while John, Mary, Jack, and I were headed to Janes Island, MD for our next, longest stop of our Spring Trip.

Before everyone broke apart, I set up the timer on my camera to get a group shot. And Riley also had to have some fun before we bundled off to Maryland. 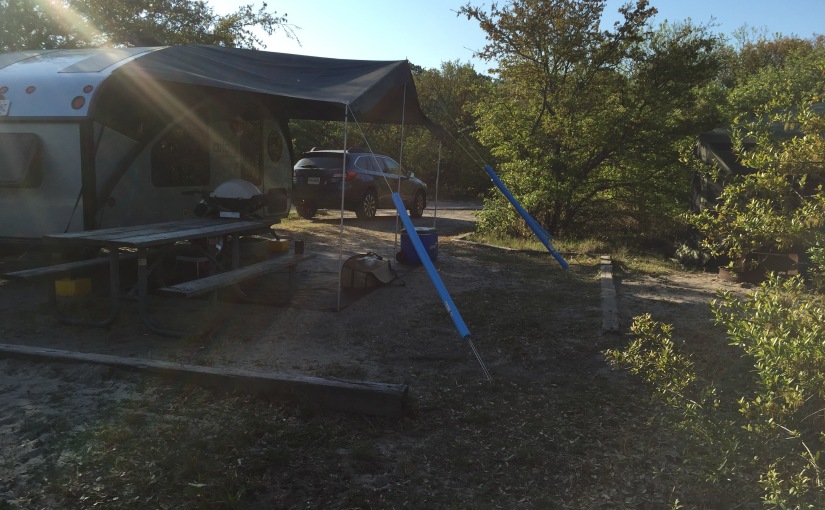 We’ve had some lazy leisure since arriving to our campsite in Virginia Beach on Sunday evening. Our schedule has included linking up with some of Jack’s fraternity and rugby buddies from long ago: Monday night was dinner with Jim and Nell in Norfolk; Tuesday was lunch with Chip and Becky in Williamsburg.


So for most of Monday, we just lazed about. Jack had a nice shady snooze in the gravity chair, Kerry and Gloria took a looping bike ride around the campsites, and I walked down the road and over the dunes via boardwalk to the beach, and took some photos of this and that. One critter of note that I was unable to capture or really to identify is the species of dragonfly that is everywhere. They are huge, appear to be a blue or green, and keep whapping into the screen house, the awning, the car, the camper. They’re simply everywhere. Also I captured by my camera, I saw lots of osprey, one of which dove into the water but came up empty-taloned; a dolphin; a group of pelicans fishing low over the water; and a black snake back at camp, racing under Roomba and into the trees before we could get a camera on it.

Here’s a little gallery of my sightings that I was able to capture.

Jim phoned at about 4PM and shortly thereafter, we headed up the road to a roadhouse/bar on the water that Jim calls his local. They were having a happy hour discount on bad beer and excellent shrimp. Jim said he often takes some advantage of these happy discounts. Jack and I chose some better beer offerings, but the shrimp by the pound were quite good, as were the dipping sauce choices, including straight horseradish that would ream-and-rebush a body’s sinuses if you got too much. We sat on the deck and watched the aircraft carriers come into port (we saw one arrive, but there were 5 due, and we saw all of them docked the next day); and the sun set, and the seagulls head to roost. It was quite a good evening catching up with old friends.
Tuesday, April 26, 2016: The next day, which just happened to be Jack’s 66th birthday, we headed out early, having first taken down the awning, because the winds were scheduled to rise with the temperatures. Our plan with Kerry and Gloria was to meet them at the Jamestown Settlement historic site after our lunch, and then we four would have Jack’s birthday dinner in Williamsburg.

Chip and Becky live in Kingsmill, and we didn’t want to arrive too early, but were unsure how the traffic might be on our route up the shore, and inland, thus the early start. As it happened, we were really too early, so we took a detour to see Jack’s old home in Hampton, plus a few others of his childhood haunts. Everything was quite different, after 25 or so years, as might be imagined.


We then took a quick tour of things that had changed on the William and Mary campus since our last visit to the ‘Burgh, and got to Chip and Becky’s right on time. Had a lovely chin-wag with them for about an hour in their lovely home, then headed over to one of the Kingsmill amenities: The Eagle, a casual restaurant and watering hole on the golf course. Chip treated us to an excellent lunch and we spent another couple of hours eating and telling stories and catching up on everyone these guys know/knew in common. It was an excellent experience, and I had a grand time meeting them both for the first time and getting to know them a little. I look forward to seeing them both again in the future.

Linking up with Kerry and Gloria at Jamestown, we wandered through the outdoor exhibits and, although it was oppressively hot in the sun, the breeze from the river kept up and offered excellent respite whenever we could find a place in the shade to sit for a bit. 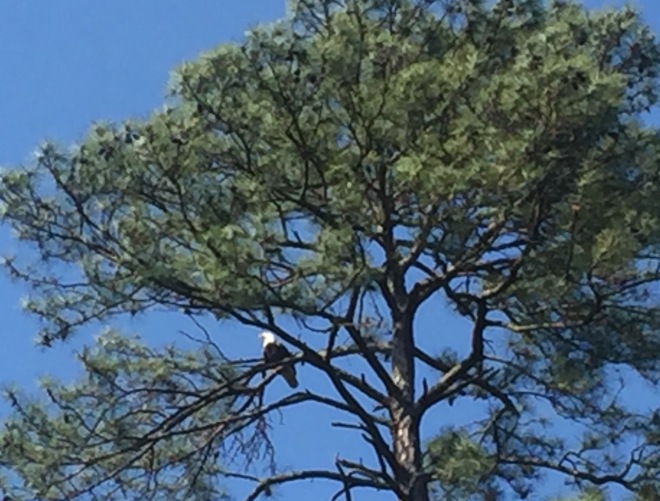 After seeing the eagle, we headed back to the ‘Burgh to give Kerry and Glo a car-tour of the W&M Campus before we went to Berret’s Seafood restaurant for an early dinner. We saw some women practicing rugby on one of the athletic fields, and just wondered if we might see an old teammate of mine, who is known to be coaching the W&M Women’s team these days. Sure enough, Beth was there, and we had a nice quick chat before she had to go back to doing what she needed to do to shape up the team for participation in a National Sevens tournament coming up this weekend. It was great to see her again, after all these years! Go W&M Women’s Rugby!

Arriving at Berret’s, we were able to walk in and sit outside. The temps by this time had dropped 10 or more degrees, and again, in the shade with the breeze, we were quite comfortable and ate more than we should have.

Stopped for provisions on the way back, where Gloria bought a little cheesecake for us to enjoy as a birthday treat, and we sat at their campsite, where the breeze had stilled considerably, and I was battling chewing insects (they always like me best), until about 10 when I headed Roomba-ward.

Hoping to get back on the bikes tomorrow if the weather holds, and enjoy our final day at First Landing by seeing more of the sights and maybe the actual ocean.