After spending time cleaning up from the Deluge, and with the wind helping to dry out most of our gear, we merely hung around Roomba on Monday morning. It was cold and windy, and kept threatening rain (but restrained itself) and so John and Mary decided to accompany us to do some shopping. We all wanted to go to Trader Joe’s and REI, and I was still looking for a place that would sell me the right sized battery for my elderly camera, so it would continue to “hold” the proper date stamp on my newly-captured photos.

On our January trip, I had discovered that my non-iPhone camera would not allow me to set the time/date. I had thought it was a function controlled by the other batteries (double-A’s), which I regularly change, although by the January trip time, I had let those run down. So I had re-charged and replaced the AA batteries, but had not fixed the problem.

The end result was that, every time I turned on the camera, the “screen” would ask for the date and time. A couple of times, I re-set them, but the date/time would go away by the time I turned the camera on again. So every time I wanted to take a pic, I had to get rid of the date/time screen just to capture an image. I thought the camera’s “mother board” was kaput or something, and began thinking about having to buy a new camera.

Who knew that the darn thing had a very small, obscure round battery, like a watch battery but bigger, that I had NEVER replaced in all the many many years I’ve had the camera? Well, I learned this by (A-HA!) reading the manual the day before we left for this trip.

We looked at drug stores and grocery stores for the replacement (CR1220). Heck, I can get replacements for my birds’ transmitters easier than this little gem. No place had the right one.

So we mapped our way to a Batteries Plus and LO! They had what I needed.

Unfortunately, the CR1220 came packaged with two of them, and I gotta tell ya—since I have had that camera for at least 7 years and had not the first clue that this battery or its function separate from the other batteries even existed—I don’t think I’ll need a second one in the lifetime of this camera. Or I’m quite likely to lose the little disc long before I need one again.

But for the foreseeable future, I won’t have to re-set the date/time on my photos, and then keep losing them in the morass of my photos when I transfer them to permanent, off-camera storage because their default date was 1985 or something. So: SUCCESS!! (Yay)

Then we went to Trader Joe’s and got mostly baked goods and cookies. John and we treated Mary to birthday sweeties like cupcakes and cookies, since she’d missed having a cake on Saturday. It was fun.

After a nice lunch at Panera’s, we hit REI—a very dangerous store for us to visit when we have dividends to spend. We all had a grand time looking around, and we came away with stuff for camping and bicycling and traveling.

The evening was a very fun gathering in our screen house (with the panels down for wind block and to keep the warmth) with the folks from Quebec Province who drive a Safari Condo conversion van, who had the site across the road; and Annie, Steve, Karen, John, and Mary. With me and Jack, there were 9 folks sitting around in camp chairs and on the picnic table, sharing beverages, guacamole dip, hummus, chips, and various nuts inside the Clam. We had fun discussions sharing our traveling adventures with Claude and Joanne from Quebec. It was a fun evening, and J n M and we decided to postpone our meal of leftovers until tomorrow night.

The clouds finally let loose with the threatened rain sometime in the night. But it wasn’t bucketing or blowing, so we were able to sleep through it. The temps dropped significantly, however, just before dawn, so I got up and turned on the heat pump so we could get up in a moderately warm Roomba. Outside when we arose, it was 41 degrees outside, and 65 in.

The beautiful blue skies of the morning were accompanied by rising wind that became increasingly gusty. So again, no bicycling for the day, although we were hopeful at first that we’d be riding in the warmer afternoon (NOT!).

Mary came by after her shower, around 10A to see if we wanted to go to one of her fave breakfast spots, down just off the boardwalk, and we had not gotten started yet, so we said, “Sure!” We piled into the Honda and headed south.

The Belvedere Hotel is one of the old-time places that’s been around since Mary was a child. Sandwiched between more modern and taller hotels, we fear that the Belvedere won’t be around too much longer, although it appears nice, clean, and well-managed.

But the highlight of the hotel is the 29-seat Diner attached. This is where the locals and the construction crews eat, and while tiny, it was fun and delicious food, with excellent diner-like service, and we had a wonderful time. I had the Belvedere omelet: like a Western omelet, but with Belvedere sauce, which is cucumber and parmesan dressing and it was delicious. 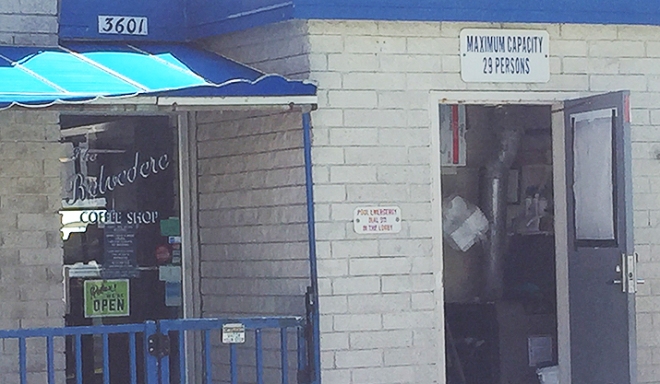 The short-order cooking area is right behind the counter, where singles sit (the booths are reserved for two or more – but they cannot seat any more than 4). We were able to watch the Atlantic Ocean and the cooks and the waitresses and the people all at once, because one wall is a mirror (helps make the place look larger) and everyone was quite friendly.

Since we were there kind of between breakfast and lunch, we didn’t have to rush out to make room for folks waiting — so we chatted over coffee/tea after our meal, and had a fun time without making the waitresses crazy. In fact, ours invited us to hang out a while. As we were leaving I got a kick out of the “closed” sign:

We walked a little on the boardwalk, heading north a short way to a Navy Seal memorial, where we saw and read some really interesting information about the group that became the “Seals” we know today — once they were Underwater Demolition Crews (UDC) and were the most decorated group of soldiers in WWII. I really liked their symbol or logo, on a large block on the ground in front of the memorial.

At this point, the sun was still bright, but the wind off the ocean was tearing our hoods off our heads, and Mary was freezing, so we turned around and walked back to the car. Mary wanted to see if another seafood restaurant that she remembers fondly was still extant down at the Rudy Inlet end of the beach, and with some driving and reminiscing, we did manage to find it: The Rockefeller Restaurant. Next time we’ll have to see if it’s still as good as she remembers.

We drove back by going through some of the old neighborhoods, which all look different from the way both Jack and Mary remember them (of course—after all, it was only 40-50 years ago they were kids down here). But the azaleas and dogwoods, camellias and redbuds were all blooming and the yards were quite pretty, even where they fronted another “MacMansion” or other enormous dwelling.

And we were warm.

J n M had a lunch date with Mary’s friends Gin and Joan, so they scooted on by the time we got back, and Jack and I just lounged around, watching the sky go completely gloomy and the temperatures fall outside. Before they left, we resolved tonight to eat our leftovers from birthday night no matter what!

No bike riding today. But the good news is that, since the bikes are already on the rack and covered, the camp break-down tomorrow for our departure to North Bend for a couple of nights will be that much easier.

When J n M came back, John and I played on his new iPad with the Apple Pencil for a while. It was fun, and made me want the upgraded iPad even more than I did before. Patience, Grasshopper.

We did, indeed have our leftovers meal, this time over at J n M’s in their cozy tent. Jack re-heated the game hen quarters and potatoes on the grill, and we combined that with a salad Mary put together, and had a dandy time. Around 9PM we called it a night.

We’re not in a hurry to leave tomorrow, and some talk has been generated about another breakfast out with Annie at least, at another of the nostalgic breakfast-placres Mary knows and loves. The night is cold (48 degrees) and we’re hopeful to have some nicer weather at North Bend. Among the topics discussed at dinner was how tired we are of this endless winter. Fingers crossed for better.