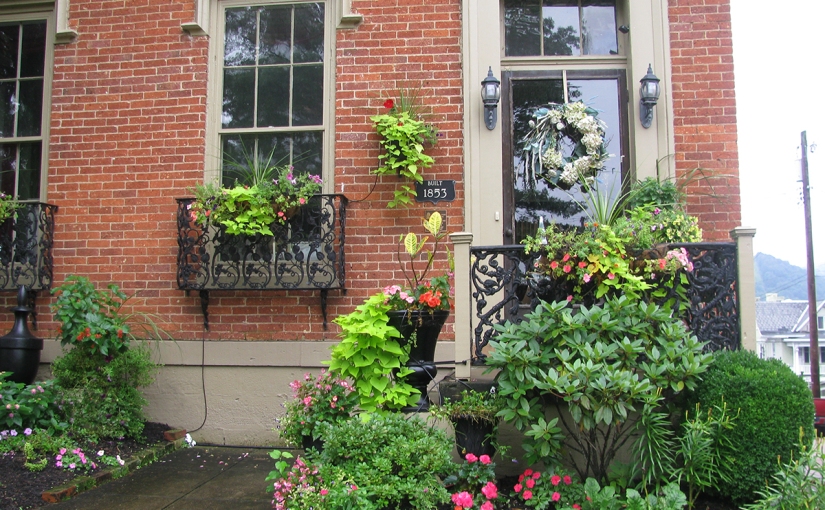 Before jumping into the shuttle service van that was scheduled to drive us, our bikes, and all our gear (in Minnie-Van) to a ‘burb of Pittsburgh (West Homestead, PA), we had time to take a quick walking tour of Cumberland, mostly along the waterfront GAP trail, and up Washington St. to the famous Episcopal Church on the hill, in which Tiffany windows glow even with the dull, cloudy day on which we started our adventure. But more of that in a bit. 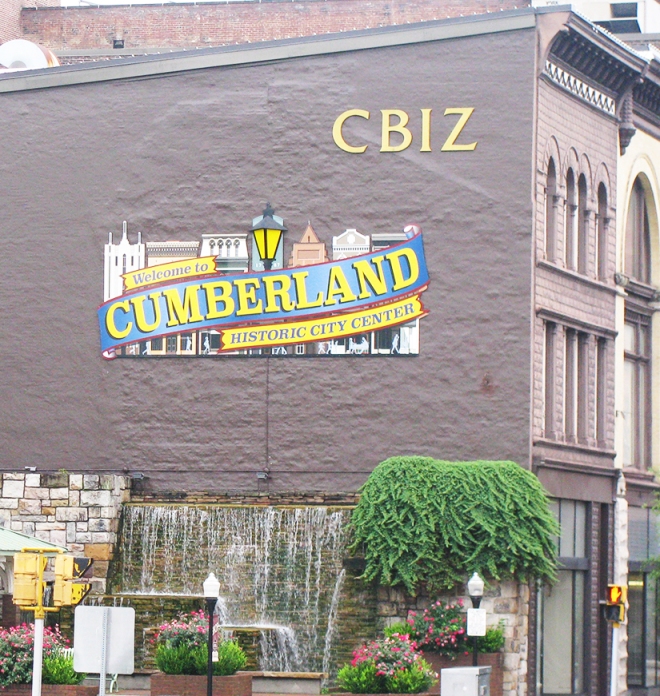 There’s a lot of history in Cumberland, where a very young George Washington surveyed the area, and where Wills Creek (channeled with concrete in the photo to mitigate flooding in the downtown historic district) meets the Potomac River. Historically, Cumberland was first a Fort, then a transportation hub; today, it is a hub for recreation, where the C&O Canal towpath trail meets the Great Allegheny Passage rail-to-trail conversion: Mile 0 of the GAP trail. The terminus of the C&O Canal, in the ebb of its heyday, became the beginning of the first US National Road. 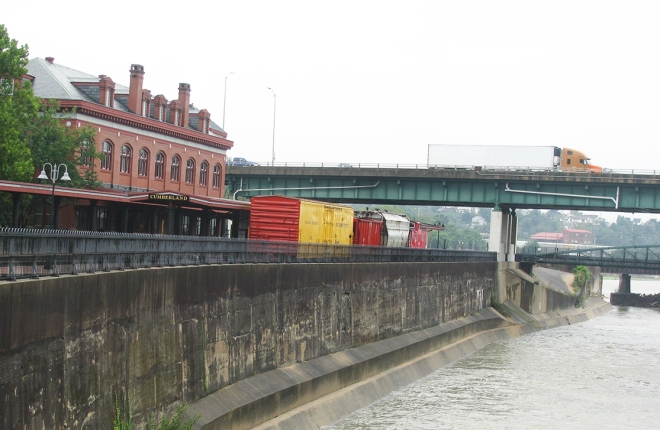 As a National Historic Place registrant, Cumberland has a lovely pedestrian area where old building facades have been preserved and are in use as boutiques, restaurants, businesses, and shops, accessible from the GAP trail. Much artwork adorns the Wills Creek area.

As we walked across Wills Creek and up Washington Street toward two amazing tours Allen had arranged for our group (one was a Historic Society preserved Victorian home with most of the period furnishings and structure intact), we saw many homes and churches in the oldest, highest-above-the-river part of town. Among the prettiest is the one at the top of this blog post.

The original Fort Cumberland, a colonial-era stronghold, was built atop the high ridge, with a protective (and controlling) view of the mighty Potomac River.

At the time, much more of the municipality was on high ground. The earth has been removed for building and roadways over the long years since it was just a fort. Now Cumberland occasionally floods. This knowledge and seeing where our cars would be parked for the trip left the three couples who had vehicles in the Canal St. long-term parking area slightly concerned about local flooding with Florence’s potential trajectory. What we hadn’t counted on was the pigeons—more on that in the final installment of the cycling part of this trip.

Upon the site of the old fort was built, in the 1800s, the Episcopal Church with the Tiffany windows.

The neatest aspect of this building, in my opinion, is the way in which they preserved some of the abandoned fort infrastructure, and used the old fort’s tunnels upon which the church sat as a stop along the Underground Railroad. For many, many years the pastors of the church hid, nurtured, and transferred escaping slaves to the next stage of safety along their road to freedom.

Our guide began our tour with a digital “playing” of the old organ (complete with a heraldic horn section). The congregation’s organist is also an organ tuner and builder, and he’s adjusted the equipment so it can be played digitally or manually; from the back of the room or from the front (during special musical events). It was pretty awesome. 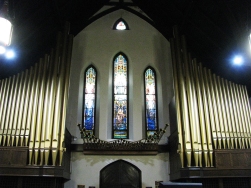 Louis Comfort Tiffany was the talented son of Charles Tiffany, the jewelry store owner. L.C. Tiffany was an interior designer in the mid-1800s, when his interest turned toward the creation of stained glass. He opened his own studio and glass foundry because he was unable to find the types of glass that he desired in interior decoration. He wanted the glass itself to transmit texture and rich colors, and he developed a type of glass he called “Favrile,” which he patented in 1892. Favrile glass has a superficial iridescence, which causes the surface to appear to shimmer, and “collects” light from that which surrounds it. “It is distinguished by brilliant or deeply toned colors . . . iridescent like the wings of certain American butterflies, the neck [feathers] of pigeons and peacocks, and the wing covers of various beetles” — according to Tiffany himself.

One of the stories told by our guide involved the integration of the church, just after the American Civil War. Some of the former slaves had been “raised” to be Catholic, but when they got to the north (Maryland was actually a slave state prior to the ACW) they were not welcomed to attend the Catholic Church’s services. One of the white friends of the Catholic congregation asked the Episcopal priest if the former slaves could attend his church (same fellow who ran the underground railroad stop) and he said, of course. There was an upper concourse set aside for the black folks—but even then, some of the Catholic blacks would not attend a non-Catholic service.

Later in the tour, we saw the original drawings for a cross and candelabra, also designed and made by Tiffany for the church. None of the pix I took of the golden items nor the drawings turned out, I’m afraid.

As we entered and exited, I was interested in the patterns of the limestone slabs in the walkways, after years and years of erosion. They looked a bit like those relief maps of the ocean floor. 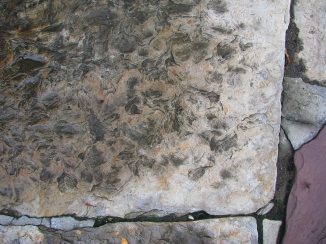 After admiring the “above ground” amenities of the structure, our guide took us downstairs, into the tunnels. There were rooms, narrow stairs, thin “runways” and low-hanging structural elements everywhere. It was frightening to think of a live person with black skin coming here for refuge and respite after a long, dangerous trip from Georgia or Virginia. Afraid every second that he or she would be betrayed. Near starvation or looking over the edge toward starvation at every moment. Too tired to sleep—too afraid or hungry or sick or injured to rest.

The fort’s ammo magazine and all the protective below-ground structures were made by erecting wooden forms and filling behind them with clay and rocks from the river. Those hardened and, with the exception of a few river rocks that have come loose over the centuries, the walls have held up to this day.

Our guide told us that, while the fort used long, underground tunnels to access water for the fort’s uses from Wills Creek and the Potomac, by the time of the underground railroad, the same tunnels were used to get human cargo from the “bad part of town” (the red light district, near the waterfronts) up to safety, nourishment, and rest under the church, and then off to the north and across the Mason-Dixon Line, a mere 10-ish miles by crow flight from Cumberland; Milepost 20.5 along the actual rail line that is now the GAP trail; and freedom for the escaped slaves.

There was much more to Cumberland that we did not see, including the structure out of which George Washington worked, and the Visitor Center. But we had a shuttle to catch at 2PM.

And we were off to West Homestead, a suburb of Pittsburgh.

It was every bit of a 2-hour drive up interstates and toll roads, but we made it without too much problem, except for missing a turn during Pittsburgh rush hour.

But the hotel we occupied, Hampton Inn, was right on the trail and the Monongahela River (the GAP trail heading east follows the Monongahela until McKeesport, where it turns to follow the Youghiogheny River (pronounced Yawk-a-gain-ee, or the Yawk for short). Milepost 150 of the GAP trail is at what the city calls “The Point” where the Monongahela and the Allegheny rivers come together to create the Ohio River.

Homestead was once known as the Steel Capital of the World, symbolizing Pittsburgh’s dominance in the industry. Our city guide (tomorrow) reminded us that, at its peak of production, Pittsburgh was commonly known as “Hell with the lid off.”

Homestead’s flagship complex of US Steel was shut down in 1986. At that time, it had 450 buildings on 430 acres, and employed 200,000 workers throughout its years of making unprecedented amounts of steel.

West Homestead is a mere 10 miles from Pittsburgh’s Point, and along with other suburbs of the city, is re-making itself as a shopping and recreation/tourism draw. Bravo to Pittsburgh and environs for making progress cleaning up and re-focusing the city.

We took a quick shake-down ride to assure our bikes made the trip in good shape (about five miles) and then got cleaned up to walk across the road to an enormous shopping area, with beautiful plantings and flowers everywhere, and more shops and restaurants than you can imagine, including Rockbottom Brewery.

Our group dinner was at Bravo Cucina Italiana, and it was excellent and fun. 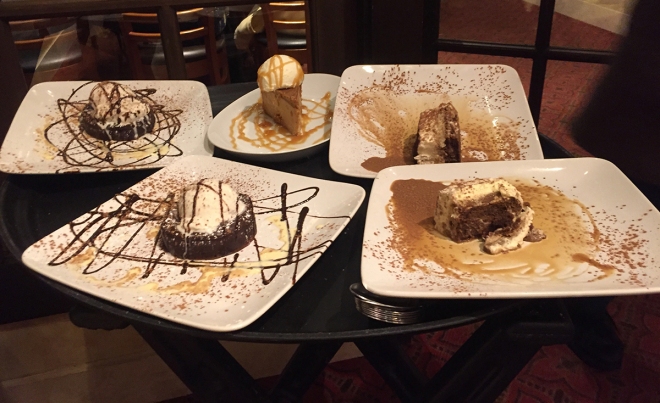 As we walked back to the hotel, we noticed a poster, but couldn’t quite get the idea of Indoor Axe Throwing into our heads.

Tomorrow, Pittsburgh and a grand bicycle tour of the city!

One thought on “GAP 2, Cumberland, Maryland”