High Cliff State Park is a lovely place, although their maps are quite confusing. But along with the water sports, for which most of our neighbors were there, campers will find lots and lots of walking/hiking/biking trails to enjoy. 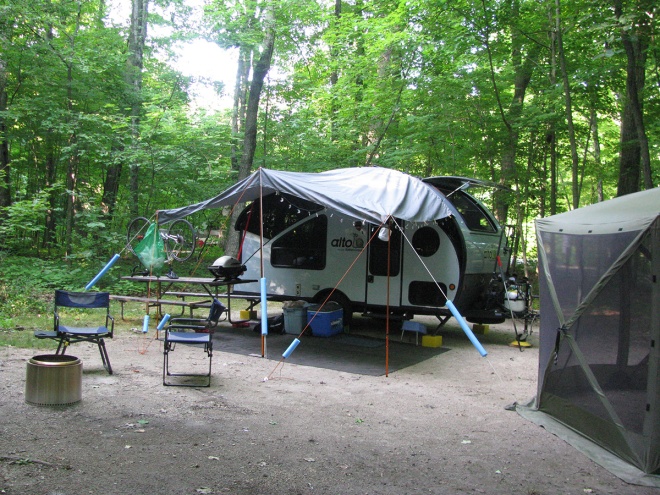 Being in the woods, and having a relaxing day on our hands, I tried to photograph a couple of our insect neighbors. 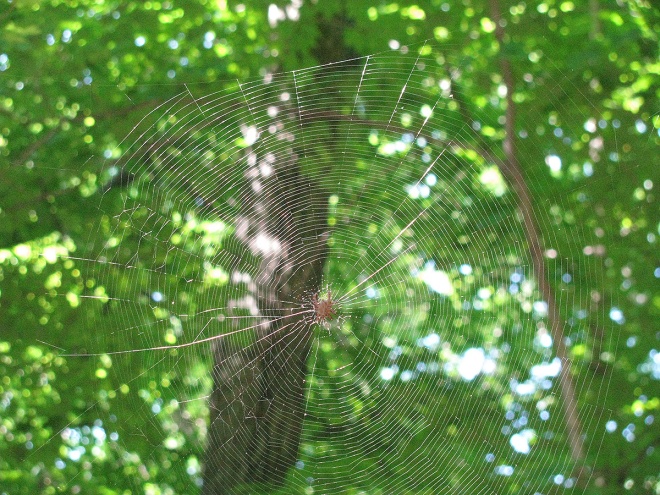 We had thought to take a ride, touring the paved roads and taking “every left turn” so we wouldn’t miss anything, but then remembered my bike chain.

Jack dug out the serious bicycle maintenance tool kit he carries in the truck, and with a couple of pairs of pliers, he fixed it right up. When we tried to find the bent link, it was impossible to discern from the others.

I greased up both chains and took a test ride to see how the fix would work, and voila! Back in bike business. So we began by exploring our loops, and found what would be the perfect site for next time we’re in the neighborhood: #109 on the electric loop. It has good space between it and both its neighbors, is beautifully shady, and has a multi-use (unpaved) trail off its back.

We rode that trail through the woods and although we had many roots and rocks to avoid, it was fine, until we joined up with the horse trail.

That part was choppy and rutted, and mostly came out of the trees and through hot, sunny, buggy open meadows. Between the mosquitoes and the chopped up terrain, I thought I would lose my mind and my fillings.

Still, we persevered, hoping that the “Overlook Trail” would take us to an overlook where we could see precisely how high these High Cliffs are above Lake Winnebago. But no. There was no overlook available, until we (mistakenly) rode our bikes onto a part of the Red Bird Trail that discouraged bicycle use, and there were short paths toward rocky outcroppings, but there was hardly any view at all due to the thick tree growth from below. In the image at the top of this post, you can see Lake Winnebago through a small window I was able to catch along the Red Bird. Jack actually walked up to one of the edges, but I could not go that close without some sort of barrier keeping my vertigo from tumbling be over the edge.

So we rode back as the sky darkened and threatened, but we only had to deal with sprinkles.

Every day our battery charged, but we continue to feel there is a problem either with the monitor, or some of the other wiring that sends solar gain into the battery because it seemed that the charge did not last as long as it should, given the sunlight and the relatively small draw (refrigerator, primarily) on the resource. The cross-breeze was such that we only had the vent fan running at the hottest part of the day, when the sun was full on the solar panels.

That is something we’re going to have to continue to research and test.

After a simple meal of grilled hamburgers and chips, we called it a day and readied ourselves for the trip to Madison, WI, only a 3-ish hour drive southwest.