Jack and I struck out early-ish to hit the cycle opportunities in the Parc de la Gatineau, created in 1938, an enormous park (with a Blue Ridge Parkway-like roadway throughout, created in 1959) across the Ottawa River from the primary parts of the city (we rode along much of the river yesterday during our circumnavigation of Ottawa).

Not to be missed sights along the way, recommended by our hosts, were Lake Pink (which is actually green, named thus because it was donated to the community by a family, surname Pink) and lunch in Old Chelsea.

The outgoing leg of the trip was mighty fine, and for most of it, we were able to choose between riding along the Gatineau Parkway with the cars, or taking a paved bikes/pedestrians only route. We did both and both were quite fine, although hilly. One hill we climbed was much like our own Rocky Knob climb, although perhaps a half-mile shorter in length (but every bit as steep). 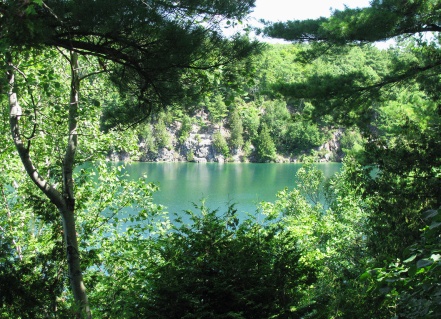 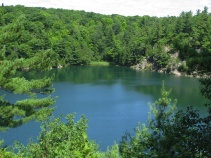 There is a lot about Lake Pink that is interesting, which I’ve copied off the reader boards here. If you aren’t interested in geology and such, you can skip this part and head down to the paragraph beginning, “After eating lunch . . .”

Lake Pink is meromictic, which means the water doesn’t mix like normal, leaving layers of different temperatures and ecologies. There is a total lack of oxygen in the bottom layers, with differing aquatic life and biomes among the various layers.

No one knew the lake was this type of body until the 1960s, when the peculiar turquoise color was noticed, and then thought to be a sign of sickness in the lake. During the 1970s, studies were undertaken to find (and mitigate, if possible) the source of the coloring, but scientists discovered that the layers of water at 13 meters (40-42 feet) had zero oxygen. At this time, they discovered the unique qualities of the Lake. The upper layers, however, are rich in oxygen and microscopic plant life (algae) and the coloration varies by how much algae is living in the topmost layers—more in the summer than in the fall and winter, so the winter/blue lake turns turquoise during the spring and summer.

After eating lunch at a very pretty bistro called Meech and Munch in what’s called “Old Chelsea” (the food was good but the service was inexcusably slow) . . . 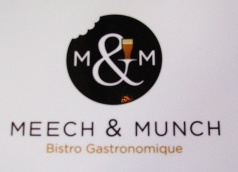 . . . we made an attempt to get back to the Parkway, but missed a turn and ended up on the not-bike-friendly urban streets of Gatineau proper, which is a busy suburb community to Ottawa. That part of the day’s activities was not at all fun, but we survived and found our truck again, and headed back to camp for a shower.

With a VERY early departure on July 20 due to an extremely long day of driving to our next destination, we broke down camp as much as possible without hitching up the truck. So when we left camp to return to Ottawa for another evening with friends at Alex and Christine’s home (including Jim & Dale and Jen & Chris). It was a simply delightful evening with drinks, a superior dinner, fun conversation, and many laughs. We are so touched by everyone’s effort and thoughtfulness to include us southerners in their Ottawa hospitality. It was memorable and we left with hearts full of thankfulness and friendship.