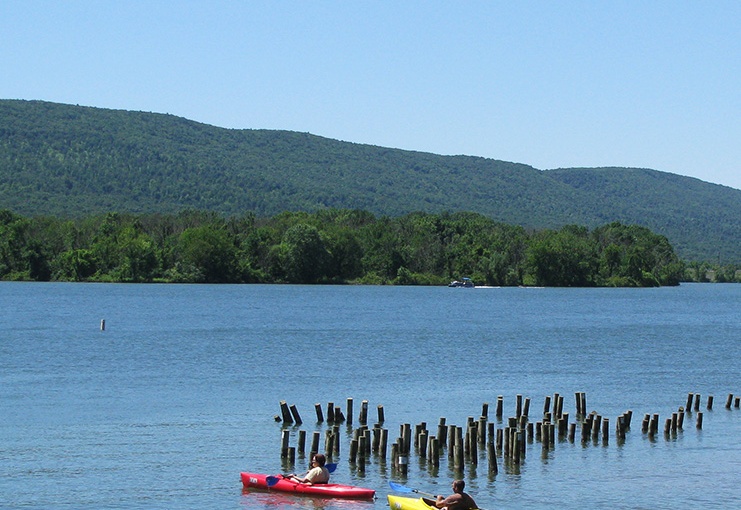 We arrived at Shenandoah River State Park in Virginia after a 4-ish hour drive from home, leaving there around 10A on Thursday, July 5. Since it was a one-nighter, we did not unhitch (except to level Roomba, but the hitch was hovering over the ball since we didn’t move the car) nor do our usual set-up routine inside.

The day was hotter than 40 hells outside, and inside Roomba, it was in the high 90s as we set up camp. We used the ceiling fan to vent some of the hot air, turned on the air conditioning, and hoped to have temps in the 80s by nightfall.

I’d prepped some ground lamb for a shepherd’s pie and put that together once the air was breathable inside, and heated it for a while in the Omnia. Since everything was cooked already it didn’t heat up the inside too terribly much, and we ate outside. Lordy it was hot.

The downside of Shenandoah River SP is that it’s a young campground, and there are few shady spots anywhere in the grounds. But we survived and slept okay.

Rolled out of there early Friday en route to Bald Eagle State Park (PA) for a two-night stay. Tried to find ice and a grocery store, but ended up doing without until the “Roomba Landed” at Bald Eagle. Conducted the whole set up routine, then ran out to find a cold dinner to bring back, ice for the cooler, and dinner for Saturday night also.

Found the absolute best butcher up the road (toward Lock Haven) in a burgh called Beech Creek. It was easy to miss, and even with the sign directing us, it was way way down a residential road and past an Elks Park (or some such) and we almost gave it up a second time, when we finally found Pete’s Meats.

Great stop. Got chicken salad for the night’s dinner (unfortunately, it had sweet pickles in it—not anywhere near my fave thing) but was good and edible; and a Delmonico steak for our Saturday dinner.

Watched the entire place fill up with campers into the evening. Next door at 9PM, the loop’s final slot was filled by the arrival of a pop-up. Felt sorry for those folks, just starting their setup as I waltzed off to brush my teeth, and the sun finished setting below the horizon.

Got up moderately early (after sleeping without the air conditioner, in 50-degree breezy weather under our blanket and with the ceiling vent on low) had sausage rolls for brekkie and then got on our bikes for a “reminder tour” of the entire park complex, which is rather huge. We’d done such a “take every left-hand turn” ride here a couple of years ago, but it was during the off season, and we were virtually alone. This time, everyone and his aunt with all the kids were headed to the lakefront beach, the marina, the canoe/kayak livery, the fishing spots, or the dog-walking areas.

In the end, we logged nearly sixteen and a half beautiful, cool, breezy miles by riding every paved left-hand road we met along the way, plus a few gravel parking loops as well. There might have been one or two right-hand turns in there, but that was only so we didn’t miss any lefts.

This truly is a beautiful park with tons and tons of stuff to do on the huge lake and off of it. Walking/trekking paths, bird-watching (we saw a juvenile bald eagle during our ride), shady lanes, an enormous Inn overlooking the lake, and all the water sports anyone could ask for.

Some of the scenes from our ride: 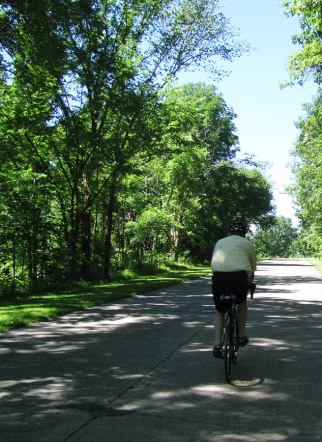 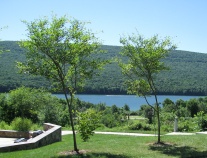 Returned to the campsite for lunch, and lounged for a while as the southwest-facing awning’s shade diminished steadily in the bright sun. Still, it stayed in the 70s to the low 80s outside, and we’d turned on the air conditioner early enough in Roomba to keep that temp in the 70s (even though the camper is not in any shade at all). There are sites that have larger trees than ours does, and all the sites are well separated from their neighbors by hedges and growth-left-tall between them. AND we had forgotten that not all the sites have water hookups (ours didn’t) and not realizing we’d be waterless, we did not fill our tank.

Still, for two nights water was not any kind of a problem because there’s a nice dish-washing station right at the bathhouse, which is near our site (Sycamore loop #87). Next time, however, we will try to get a site with more shade (although the breeze continued to be cool and refreshing).

This trip had commenced a couple of days after we picked up the “Beta Version” of the replacement awning made locally by our yurt-making friend. Many Alto owners want the older and now-discontinued version of the awning Safari Condo had offered as an option with their Altos. So we are testing a replica to see if folks like it, and if they’ll buy it from our source.

The one we’re testing has a couple of “warts” that will definitely need fixing if/when the awning goes into production. But overall we’re quite pleased with the Beta Retro-Awning. Next week, more of the folks who’d expressed early interest in our results will be able to see it “up close and personal.” So we’ll see how that goes. 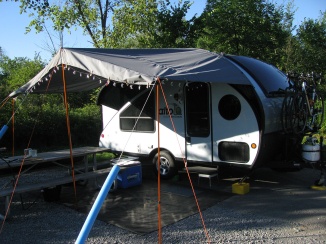 We’re also testing a solar light string that we picked up to use when we won’t have power (or be able to erect an awning) at the Safari Condo Anniversary Celebration next weekend. Neat little “blue moons” charged with their dedicated solar charger. They’re kind of cool, although the blue light doesn’t provide the true lighting we like from our rope lights we normally string on the awning. But the blue moons are pretty.

Later, after showers and packing up and racking up the gear (decided against a later-evening bike ride) we re-heated some macaroni and cheese from our freezer, roasted some fresh corn purchased yesterday from an Amish family’s roadside veggie stand, and the Delmonico steak we purchased from Pete’s Meats. What a delicious meal! We even topped the perfectly-cooked meat with Jim Gauvreau’s “compound.” What a treat. 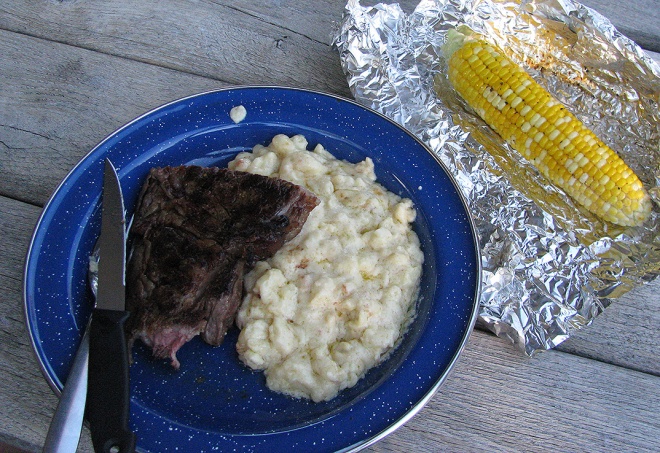 With the Solo Fireplace roaring and the sun setting, we began to enjoy the heat of the fire, and watched the birds go to roost in the “wild areas” of this marvelous park. Definitely a high recommendation to anyone passing through this part of Pennsylvania (Howard PA, near Lock Haven, PA).