In January of 2016, we headed out with a newly-acquired Alto camper trailer (we named Roomba) to accompany tent-camping friends to Mattamuskeet Wildlife Refuge, camping at Pettigrew State Park in North Carolina, just on Lake Phelps.

That was so fun we decided on a reprise of that trip with the same friends, who are now also Alto trailer owners (they named theirs Moon Shadow). Last time, the temps were quite chill, and Mike and Barbara were tenting, although we shared our camper’s propane heat on a couple of occasions. But it was bitter cold.

This time was not as gray and frosty, but still cold overnights, and — well, I’ll let you read all about it in several posts.

The weird thing about the whole stowing and prepping during this type of winter camping is that nothing that would be damaged by freezing could be out in Roomba nor in the back of the truck overnight. So we could not pre-pack as we so often do to assure an early departure. We removed our bathroom kits from our clothes bags, and put all the  food (including the ‘fridge food, as nothing was going in from our home freezer) and other things that would be damaged by freezing into the truck very last before hitting the road. We put the refrigerator food into the ‘fridge without turning it on, figuring that it would not freeze solid in the 3 hours it was going to take us to get to North Bend (halfway point overnight spot). Measuring by past experience, the interior of the camper gets really cold on cold traveling days, so we couldn’t even put the dishwashing liquid into Roomba where it usually stays.

So the whole packing up thing was a challenge. We’d left our bed topper rolled and in Roomba for the entirety of this deep freeze (started about New Year’s Eve and overnight temps were in the low single digits — one AM we had zero degrees F — steadily for the whole of 2018). So the topper was stiff as a board and we probably could not have unrolled it even if we’d wanted to. Our hope was that it could ride in the back seat of the truck and thaw a bit, but it was too wide/stiff to fit into the cab, so we had to leave it in Roomba.

Once we arrived at North Bend Federal Campground (around 3P, after a stop for lunch and another for fuel) we plugged up (site 51–with between 2 and 3 bars of LTE and/or 3G cell service) and cranked the propane heater which solved the problem of the frozen bed topper nicely. 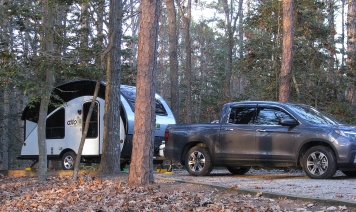 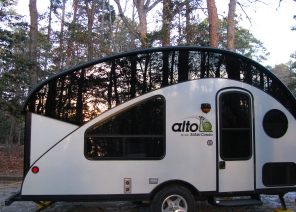 North Bend was 28 degrees, and there was still significant amounts of snow along the roads, especially at the edges. The guard said that there had been about 5 campsites used last night, but everyone had left.

They had sites 51 – 77 open, with one heated bathhouse that has maybe 8 private toilet/bath rooms. Site 51 is far from the lakefront, but pretty close to the bathhouse.

We did not unhitch, only leveled and set up, again pondering what would go where when we take off for Pettigrew State Park in NC tomorrow. We’re about 3 hours away from our next stop and, happily—although tonight will be lows in the teens again—the temps will be trending upwards for our whole stay at Pettigrew.

We have brought yeast rolls rising in Omnia, plus a lovely (but untried) chicken stew in the Billy Boil. After set up and a quick walk down to the lake (water levels are waaaaaay low—the “beach” I walked along was really the lake bottom) we are now happily ensconced in the warmth, and getting ready to continue our listen to another of the “Department Q” crime/mystery series (by Jussi Adler-Olsen) with Carl Merk: The Hanging Girl. 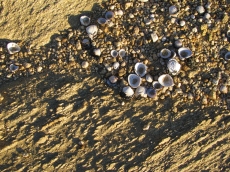 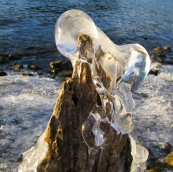