I’m sort of jumping the gun here, because we’re not gone yet.

Still, I worry that our international access to the internet might be spotty at best, and since I’m doing my own research for background in prep for departure, I figured I’d check into one of our stops along the way.

I share this now because, as we tell friends about our trip, we note that we’re going to a World Heritage Site called Cesky Krumlov in the Czech Republic. Everyone asks what and where that is, but I haven’t been able to answer, because I have failed to do my normal background work to date.

So here it is, from the Ckrumlov.info city info site, and Wikipedia.

The city name begins with Český (Czech) to differentiate it from Moravský Krumlov in South Moravia.

Construction of the town and castle began around 1240 by the Vítkovci at a ford in the Vltava River, an important trade route in Bohemia. According to local legend, the name derives from the German “Krumme Aue” which can be translated as “crooked meadow.”
In 1302 the town and castle were acquired by the House of Rosenberg. The majority of inhabitants were German at that time. By 1336, Czechs formed a small minority. In late 15th century, when gold was found next to the town, German miners came to settle, which shifted the ethnic balance even more.
Emperors Rudolf II (1602) and Ferdinand II (later) bought Krumlov, and he gave it to the House of Eggenberg which established the town as the set of the Duchy of Krumlov. From 1719 until 1945 the castle belonged to the House of Schwarzenberg.
Most of the architecture of the old town and castle dates from the 14th through 17th centuries; the town’s structures are mostly in Gothic, Renaissance, and Baroque styles. The core of the old town is within a horseshoe bend of the river, with the old Latrán neighborhood and castle on the other side of the Vltava.
There were 8,662 inhabitants in Krummau an der Moldau (as called by the Germans) in 1910, including 7,367 Germans and 1,295 Czechs.
After the First World War, the city was part of the Bohemian Forest Region, which was initially declared to be part of German-Austria. By the end of 1918 the Czechoslovak army had occupied the region, which became part of Czechoslovakia. In 1938 it was annexed by Nazi Germany, as part of the Reichsgau Oberdonau unit of Sudetenland under the Munich agreement. After World War II the town’s longstanding German-speaking population was expelled and it was returned to Czechoslovakia.
During the Communist era of Czechoslovakia, historic Krumlov fell into disrepair, but since the Velvet Revolution of 1989 much of the town’s former beauty has been restored, and it is now a major holiday destination, with high numbers of tourists from Europe and Asian. In August 2002, the town suffered from damage in a great flood of the Vltava River.
Český Krumlov Castle is unusually large for a town of its size; within the Czech Republic it is second in extent only to the Hradčany castle complex of Prague. Inside its grounds are a large rococo garden, an extensive bridge over a deep gap in the rock upon which the castle is built, and the castle itself, which in turn consists of many defined parts dating from different periods. After the garden had been inadequately maintained in the second half of the 20th century, the site was included in the 1996 World Monuments Watch by the World Monuments Fund. With financial support from American Express the garden’s central fountain was documented and reconstructed, and remains functional today.

The Church of St. Vitus (Kostel Sv. Víta) is a Gothic church inside the Castle, dating architecturally to the 15th century, with frescoes from the same period.
Český Krumlov Castle preserves its Baroque theatre, built in 1680–82 under Prince Johann Christian I von Eggenberg and renovated with up-to-date stage equipment under Josef Adam zu Schwarzenberg (1765–66). It is one of few such court theaters to retain its original stage machinery, scenery and props.
Due to its age, the theater is only used three times a year (only twice open to the public), when a Baroque opera is performed in simulated candlelight. Visitors can take a guided tour beneath the stage to catch a glimpse of the wood-and-rope apparatus that allowed stage settings to be moved in and out at the same time as the audience was diverted with fireworks and smoke.
The castle’s last private owner was Adolph Schwarzenberg. It was here that he received President Edvard Beneš and gave him a large contribution for the defense of Czechoslovakia against the growing threat of Nazi Germany. His property was seized by the Gestapo in 1940 and then confiscated by the Czechoslovak government in 1945.
Krumlov has a museum dedicated to the painter Egon Schiele, who lived in the town.

About 10 kilometers (6 miles) from Krumlov is one of Bohemia’s oldest monasteries, Zlatá Koruna (“The Golden Crown”). About 30 km (19 mi) from Krumlov is the Hluboka Castle, established in the twelfth century and later remodelled in imitation of Windsor Castle.
Krumlov is close to the Šumava National Park, the Czech Republic’s largest national park. The Šumava mountains lie along the border with Austria and Germany and offer a range of natural habitats – peat bogs, Alpine meadows, old-growth forest, lakes, and rivers. The area is popular with walkers, cyclists, and Vltava canoeists. Cesky Krumlov is a short distance from the man-made Lake Lipno, on which many people take boat trips to various small towns and to the dam, with its Hydro power plant.

Český Krumlov is home to the Pivovar Eggenberg brewery. It has been used for locations in movies such as The Illusionist (2006) and Hostel (2005), as well as the 1973 German movie Traumstadt (Dream City).

So. That’s what we have to look forward to on Days 3 and 4 of our cycling tour. I hope Eggenberg brewery beer will figure in our sampling of the area’s treasures. Oddly and fun in addition, we’re staying at a hotel called the Peregrin on a quiet street off the main square. AND we’re signed up for a guided tour of the central town, on our first evening there. Definitely looking forward to it. 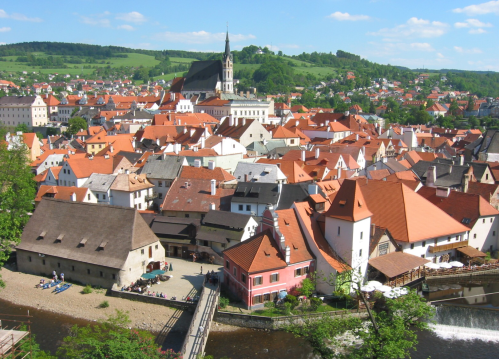 One thought on “Upcoming International Trip”