Today was all about cycle training as much as possible given what the campground offers. But we also found some “culture” to inform us.

We were definitely going to ride to the beach again. But our friendly hostess recommended a “stone house” that she said was at the boat launch area of Lake Vesuvius (opposite direction from the beach) along a paved walk. This entire area has been all about iron ore mining and smelting for many many decades, until better ore and better shipping lanes were found in Pittsburgh. The limestone-cum-iron ore geology makes for these steep cuts in the ground from waterways and runoff, and at one point, the “miners” didn’t have to even dig a mine, but just chip the ore off exposed deposits.

Through the steady wearing-away by water through eons grew this rock house—or really, a tall cave—which is evidently a common structure in iron-rich regions. Our informative sign indicated that there were probably employees of the Vesuvius Iron Furnace (down at the bottom of the Rec Area drive, off that route 29 we did not want to pedal) who would come to this rock house to extract coal from the seam at the back of this open cave, so they could heat their homes. 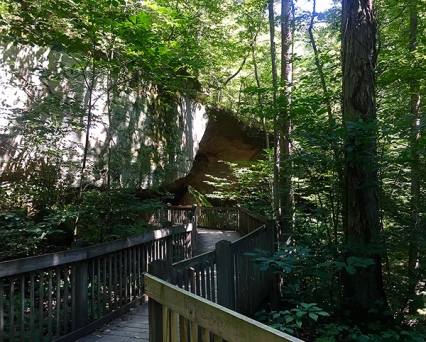 The way down to the boat launch and rock house was steeper and possibly longer than the downhill side toward the beach. We rode down and parked the bikes while I walked along the “boardwalk” at one side of this finger of the Lake, and grabbed a few photos. Then we rode back to see the rock house, and then climbed back up the hill. 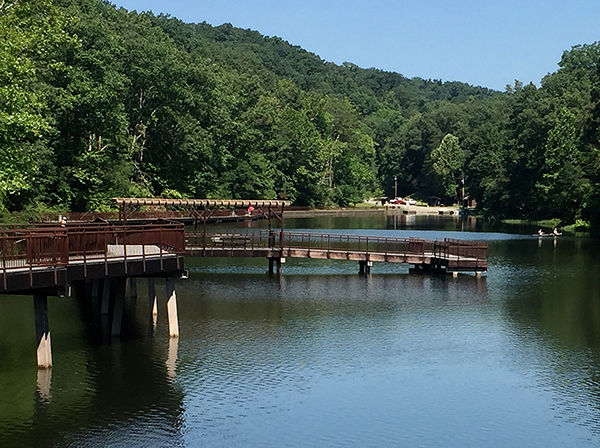 After catching our breath, we rode down to the beach again. This time, there were peeps there, readying to picnic and watch the kiddies swim. Back at the tops, we did a few more loops trying to get our mileage up to 10 miles. It was a great workout.

Private showers are simply the bees knees. It felt very good to shower (I took my time and luxuriated a bit), and we had a lunch of chicken salad and crackers, then grapes and carrots to fill out the belly. As we were continuing to relax after lunch, a good little thunderstorm came through just to keep us honest. We had to haul everything back under the awning again, and we had quite some rocking and rolling from the storm gods fighting with each other, but luckily, no wind.

Later we tried to begin to get ready for departure on the morrow with a bit of packing, but the storm kept rolling in and out and over and yon, so we mostly kept inside. Dinner: spinach pie redux. Next stop will be back in Virginia, to Grindstone campground, one of our fave spots, near the Creeper Trail between Damascus and Abingdon. We’ll definitely be un-hitching there to ride the Creeper if the weather will cooperate.

We got to bed early with a plan to arise early, and after tea/coffee, eat somewhere on the way (and grab some wifi to catch up on emails etc). It was mapped to be a very long day of driving to Grindstone.