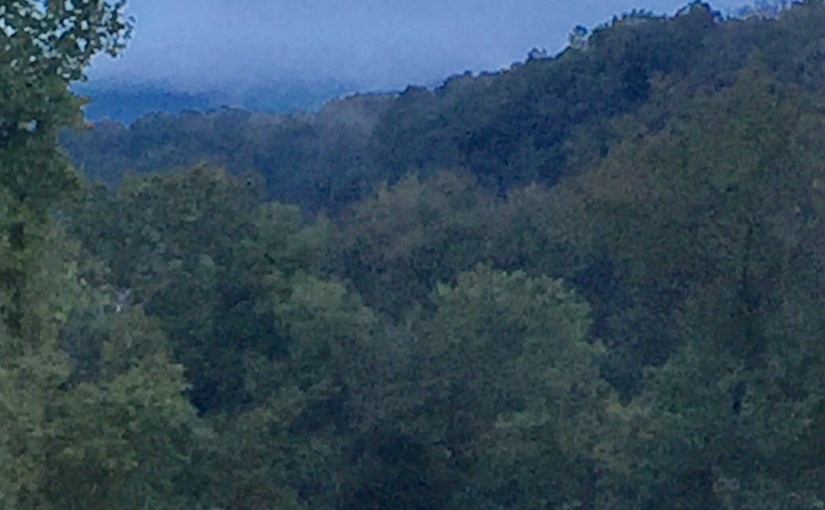 The day after Page flew back to Berlin, Jack and I embarked on a reprise of our last fall’s trip to Cooperstown, NY. This trip had been excellent last year, but did not include our friends, JB and Martha, due to health reasons.

Almost immediately upon our return last year, Kerry & Gloria, JB & Martha, and Jack & I put another excursion to the same location on our calendars so that JB, who is the true baseball fan among us, could go to the Hall of Fame as we’d hoped last year. So we set off on Sunday, September 25.
Our first stop on this reprise trip was Shenandoah River State Park near Bentonville, VA. Once there, we hitched up with Kerry’s brother Ken, and Diane, who are moderately new to RV-ing, and are big on both hiking and cycling.
Jack and I have stayed at this state park several times in the past, and really love it not only for its situation along the Shenandoah River, but also for its hiking and cycling paths, lovely (flat) sites well-separated from one another with full hookups (except sewer), friendly hosts, clean and upgraded bathouse with private showers, nice laundry and dish-washing facilities, and general quiet. The only downside is that in summer, the open-ness and gravel substrate of the sites would make for a lot of heat. It’s also one of the few state parks in VA that stays open for RV camping year-round. Certainly, it gets cold here, but the water hookups have freeze-protection, and can be slightly fiddly to engage in warmer weather if you’re not familiar with the sequence of steps to get the water up from the well.

Another positive feature I’d forgotten from prior stays until I sat outside to write this missive this AM (Sept. 26) was the plethora of bird life in occupancy. Waves of bluebirds passed through, nibbling on sumac berries and bugs, as I was working. Today we saw not only the sexy species like bald eagles and osprey, but also kingfishers, woodpeckers (both downy and pileated), a couple of meadow larks, and the usual suspects like jays, crows, titmice, chickadees, and more. I’m no expert bird identifier but there were multitudes of sweet-singing warblers in the brushy growth around the camp sites.

We thanked everyone left on the scene, apologized again to the pastor, and Jack & I jumped back into our vehicle, the deputies stopped traffic both directions, and at 5:45 (15 minutes to spare until Sunday evening services began) we headed along the alternative path to get back to Rt. 33, praying there were no narrow bridges or twisty roads en route.
Somewhere during the most harrowing part of our day, Gloria had called Kerry’s brother and they were at the campsite, set up, and wondering where the heck we were. They had placed chairs in front of empty sites near their own setup, and when we got to the park, we had proximate sites, just across a brushy border from the riverside hiking path. They were a welcome site, especially as the park was much more full than what we had expected it to be at the end of a weekend after Labor Day.
We did a quickie set-up (for us) and I put the Omnia Oven with the fully-risen bread dough inside on top of the stove to begin baking. It was full dark before we felt we were organized enough to head down the road to Kerry and Glo’s spot to enjoy an adult beverage and a bit of downtime with our friends. We ate a chicken salad supper and shared our fresh-baked rolls with our RV fam at about 8P, and everyone hit the hay around 9:30P.
JB and Martha have had houseguests and are set to meet us here at Shenandoah today, Monday, Sept. 26, to fully begin our long-postponed adventure north. They also will be looking forward to some kick-back time relaxing with friends. We share a dinner and a campfire tonight and set off for Lakawanna State Park (PA) in the morning, where we will spend two nights before hitting Cooperstown and Glimmerglass State Park (NY) for the majority of our overnights on this journey.