The storm that threatened the night-before-last came with a vengeance early last night (Friday, June 17). We had been warned, however, so we had “battened-down” the hatches, so when it blew in, nothing blew away. Lots of hard rain on Roomba’s roof, blowing under the awning and into the screened-in porch. But nothing was damaged and everything stayed put.


We had our coffee/tea inside when we roused, but wanted to do some shopping for our departure day dinner. In the overcast and sprinkling sky we headed toward Williamsburg. First stop was Starbucks for breakfast.
We also checked email and other feeds while using their wifi—and the Starbucks is in the same center as the Fresh Market. So the timing was ideal. 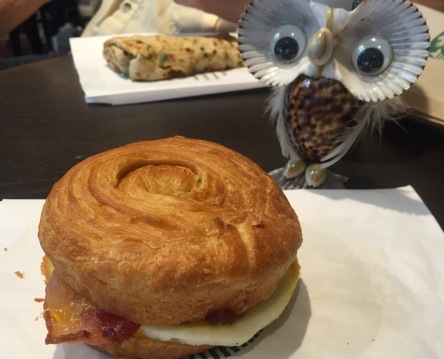 The current plan for tonight’s dinner is to join Alan, Mary and others of our Bike Virginia gang for a toddy at A&M’s and then to head out to Nawab’s Indian for dinner. Indian food might not be the best choice for the night before a long ride, but with the intention to get only “American Hot” spices, our hope is that no suffering will be undergone by any of the crowd riding to Richmond tomorrow.

While this evening was originally going to be our seafood cookout day, we re-arranged the menu plans so we could join up with the gang in town. So when we headed over to Fresh Market this morning, Jack and Yowl checked out the fresh salmon and swordfish options. The salmon just looked too good (and it grills up so nicely under Jack’s “baton”) so they settled on a small grilling portion for Sunday night.


We got some additional appetizers, crackers, bread, and other things there, then stopped at a 7-11 for more Gatorade and ice.

With the wind, things back at Roomba had begun to dry off. But when I set myself up in the screened-in porch, it was downright chilly; and every now and then a spit of a shower hit the roof and blew in through the netting. But it was a lovely place to sit and read and occasionally, nap. Yowl and I enjoyed our afternoon in the cool outdoors.

We met up with Alan, Mary and a bunch of new and old friends. Fun evening with Indian cuisine, lots of catching up, discussion of retirement plans and hopes, and the bike ride scheduled for Saturday, when the weather is forecast to be splendid.

After a single malt tasting back at A&M’s, we drove back to Roomba and hit the hay around 10, anticipating an early beginning so we can meet Mary and Tom at the Riverfront Park entry to head to Richmond.