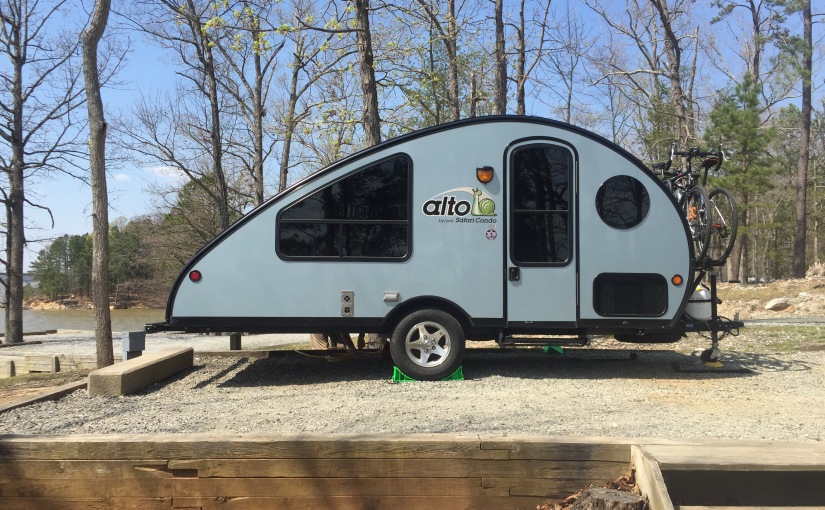 We had another leisurely awakening and breakfast for our last day in camp (March 24, 2016). Noticed a lot of pollen on the car, table tops, and Roomba. From certain angles, the exterior appeared green instead of Roomba’s normal blue.

Another short bicycle “prowl” through the entire campground was on the schedule, and we visited closed-off camping areas, two marinas, and took the roller-coaster road out to and back from the equestrian camping center again. Ended up putting about 11 miles on the year’s tally.

During the ride we saw two more red-tailed hawks, and at least two red-headed woodpeckers. It is very weird to hear blue jays mimicking hawks/osprey and they had us fooled several times during our stay here.

I forgot to mention that, while in camp yesterday AM, we watched a (probably) nursing momma squirrel emerge from her cavity nest and just sun herself on the side of a tree, alternately stretching her front limbs, and taking an enormous yawn. Then she just “hung” there, plastered to the side of the tree, head-downwards, presumably warming herself for a while before returning to her hole.

It was pretty hot as we returned to camp, but the wind picked up (again), and we had lunch before beginning the stow-and-pack process. We began rolling out toward the dump station, to finalize the de-winterizing process, at about 2:30P.

Completely uneventful drive home, although we felt like it was almost entirely uphill from Danville to Meadows of Dan: about 2 hours of the drive. By the time we were trying to back Roomba up the gravel drive into the garage, the Soobie-Roo was decidedly hot. Had to take a few re-tries to get everything aligned right, and finally unhitched to let the TV (tow vehicle) rest and cool down.

We had a brief thought that we’d make Happy Hour at our local in Floyd (Dogtown Road House) but it was simply too late and frankly, we were tired. Strange, how sitting in a car for a few hours can make one feel exhausted. But, as light as an Alto is, hauling any type of trailer is just somewhat more stressful than simply driving. In addition, I always stress out trying to back Roomba into his chalet.

Saved all the unpacking until Friday, and we’re definitely getting into a “groove” on that front. It went quickly and easily, especially since we planned very well for our food needs this time, and didn’t have too much left to remove from Roomba’s ‘fridge to the house.

We’re thinking this will have to be a more frequent trip than only on our anniversary. Occoneechee State Park is truly lovely and there’s lots of cycling opportunities at and near the park.

Ciao, Occoneechee. Until next time.