As I start this blog entry (Wednesday, March 23, 2016), I’m sitting in the “screened porch” listening to the birds call one another, and to a squirrel scurrying around in the leaf litter, watching the sun get lower over the water. Even though the wind is really blowing, it is downright hot here in the “porch.” Of course, there is a fairly solid buffer of evergreen trees directly in front of me now. 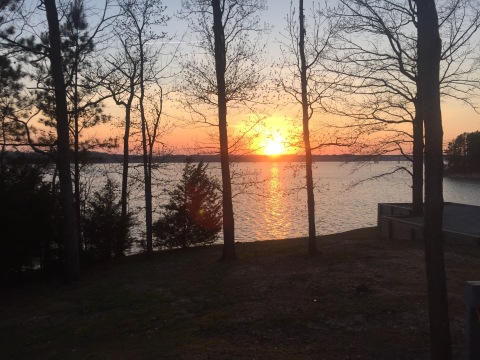 While we did see an osprey circling just off our camping site this AM, the single avian critter we’ve seen the most is the ubiquitous crow. Yesterday, we saw an American kestrel or two, and today, we heard (but did not see) a kingfisher. There was also a redtailed hawk soaring over one of the inlets of the lake.
Before we left for our short ride today, we had to roll up the awning, hoping we can re-pole it if the wind dies down during the day. But it was fiercely flapping as we finished breakfast and reading and suchlike before setting out on our ride. So we decided we didn’t want to worry about it while away, and secured it.

In about a month, we’re headed to the organized spring bicycle ride sponsored by Cycle North Carolina. Along the route back home from that ride, we’re scheduled for some Roomba camping, and the last stop before home is a federal campground called North Bend, which is a near neighbor to Occoneechee. North Bend is farther east, where the actual Kerr Reservoir hydro-electric dam is (in fact, when you cross the dam you’re in North Carolina), but it’s a very nice public area with an educational center, a visitors center, and all sorts of activities, events and special use areas. And tons of campsites. It’s the same body of water we call Bugg’s Island Lake and the North Carolinians call Kerr Lake.

Anyway, our goal today was to head over to North Bend and cycle around all of the camping areas, including the one we’ve reserved, just to check it all out. And, of course, to get a few “wind-down” miles on the bikes after our excesses of yesterday.

We had a very nice tootle about, and found, then scoped out, our scheduled site. We even circled through a lot of the still-closed areas where maintenance crews were working to ready the whole place for the camping/fishing/boating season.
Cycling through some of the sections with non-serviced sites, where the sites sit right next to the water, we envisioned ourselves able to get enough solar gain in some of them to manage a long time without shore power. The trick would be AC. It gets hot – really hot – down here in the Piedmont of Virginia during the summer. BUT. We also discovered that this particular federal campground does not prohibit generators. So if we returned and wanted to be right on the water near a beach in the summer, we could manage it with the screened porch and our generator that can run the AC system in the Alto. Not too shabby.

Now maybe we have to get some kayaks. Not really – water sports just aren’t our thing.

Anyway: North Bend Campground is only 20 miles away from Occoneechee, and, by parking at the Visitor Center, we ended up cycling about 10 miles without leaving the campground. We didn’t push things, as we wanted to get back to camp to put our feet up a while, enjoy the 85-ish degree temps, and get an early start on the meal we’ve been anticipating as our “anniversary dinner.” 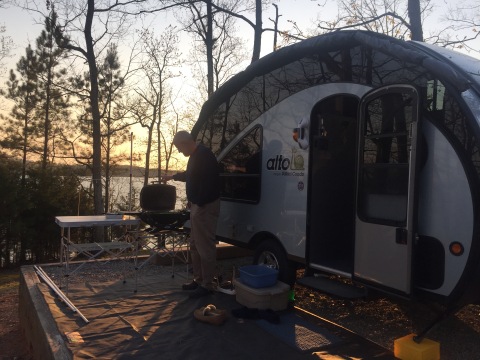 After showers and a bit of a laze-about, we started dinner prep. While we were having some artichoke bruschetta on some nice crackers, an adult redtailed hawk landed in the tree just above Roomba. Jack saw it land, and I saw it take off, handling the wind as it looked below for a possible meal. Red tails are the most beautiful critters on earth (but I’m biased).

Not long after that, I saw a bright flash of black and white – and there was a hint of red also. I first thought it might have been a rose-breasted grosbeak, but we looked harder, and it #1, didn’t fly or land like a grosbeak, and #2 had a LOT more red than it should.

In just a moment or two we decided it must be a red-headed woodpecker – a species I’d never seen in real life. Jack looked it up in our digital Peterson’s Guide, and yes, it WAS a red-headed! Then we saw a second one. We were so excited.

One landed right outside the round window as we sat in our “nook” under the Big Front Window, and try as I might, I could not get a photo with my iPhone. Every now and then, I dearly wish I had a “real” camera with lenses and such (then I realize how much stuff I’d have to carry around with me if I did have one of those . . . And, well).

So, on the bird sightings front, this trip quickly moved from ho-hum to fun and exciting. I was very happy.

Dinner was Roquefort butter ribeye steak (thanks again, Jim G.), grilled asparagus, and cheese tortellini. Jack did his usual magic on the grill, with his rubs and spices, and I watched the sun set over the lake for the last time this trip. Got some photos as the day waned, but not much exciting to show (since I couldn’t get one of the woodpecker).

After our anniversary dinner, we retired to the screened porch for a final glass of wine or two and topped off the night (and the trip) with a dram of Glen Morangie single malt. Altogether a stellar trip and celebration of our 8th real anniversary. Multiply that by four for the number of years we’ve been officially married, as of Feb. 29, 1984 (then add 6 years of our “extended engagement” pre-wedded bliss).

Here’s to Sadie Hawkins Day and all the girls with the moxie to ask the boys for their hands in marriage! 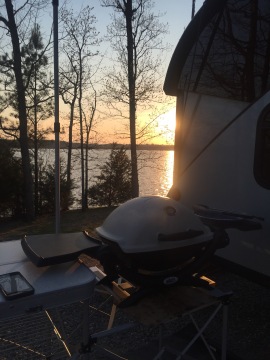 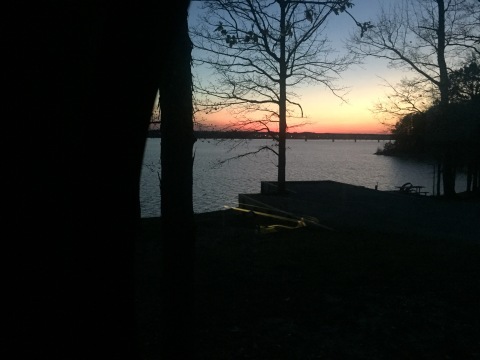 One thought on “Penultimate Day”