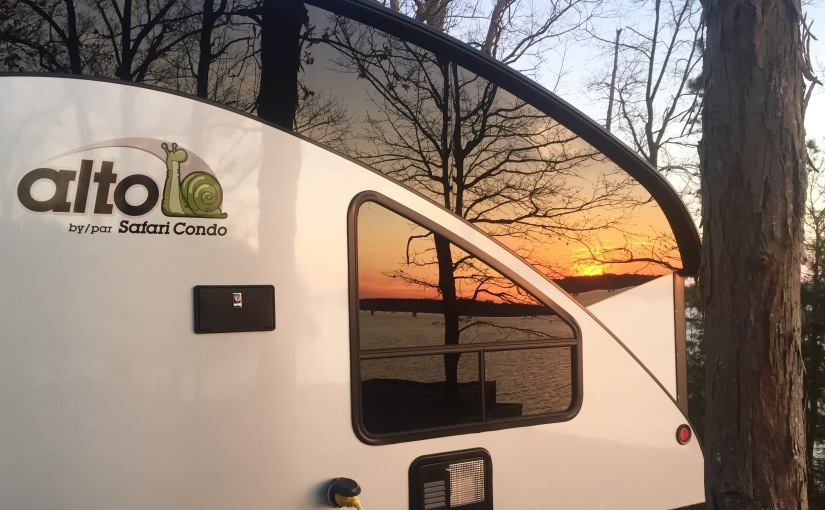 We had an absolutely splendid day yesterday (Tuesday, March 22, 2016).

After a leisurely morning (with very little wind) and grilled sausage rolls for breakfast, we mounted the car hitch bike carrier and the bikes, I made ham and cheese sandwiches for lunch, and we took off around 11 for Farmville.
On various folks’ recommendations, we wanted to check out the High Bridge Rail Trail, which is a long (30-ish miles) Rails-to-Trails conversion with Farmville, VA at its center. What we hadn’t realized is that it’s actually another of Virginia’s excellent state parks. 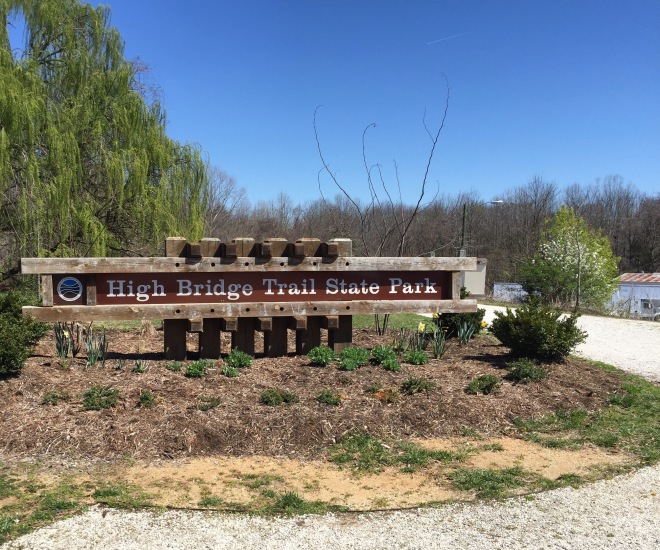 Farmville is straight up Route 15 from Clarksville, about 55 miles. It’s a nice drive through pretty countryside, so we were poking around the city trying to find the “trail head” and some parking at around noon. There is a free municipal parking lot right at the in-town access point, and most folks suggested we should head east, which is the direction that incorporates the High Bridge itself, significant not only for its engineering, but as a integral supply line during the Civil War (more on the history part at the end of this note). “There have been higher bridges not so long, and longer bridges not so high, but taking the height and length together, this is, perhaps, the largest bridge in the world.” –C.O. Sanford, South Side Railroad’s chief engineer, 1852.
Headed eastward, the trail simply ends just after a place called Moran—about 15 miles from Farmville. Our plan was to ride the entire eastward length and back for a 30 mile day—our longest ride so far this year.
We stopped along the High Bridge itself to eat our sandwiches. Man, it was windy up there, at the tops of the trees. I took a silly panorama that doesn’t nearly show the height of the bridge, but that was me facing north, swinging the camera from my left across the vista to my right, with both bridge railings (right and left) included. Directly below most of the bridge is wetland and drainage to the Appomattox River, which really isn’t very wide along here, but also flows under the bridge.

The day stayed warm and breezy, and we stopped at a Civil War earthwork fortification that those who manned it (for protection of the bridge itself) called “Camp Paradise.” After that pause for some edification (more on that below), we rode without much in the way of stops (other than a pit stop in Rice) until the end of the trail. We ate a NutraGrain bar and turned around.

I took a couple of snaps along the way, but there’s not much to see. It was a mostly flat, well-maintained surface, more-or-less straight shot. We were hoping for a tailwind as we made our return, but that was not to be. Both of us, however, were pleased with our performance in stretching our fitness levels to be able to manage 30 miles without falling over dead. Both of us even were able to “up the ante” by taking the last few miles at a sprint (relatively speaking) into a significant headwind.

Before getting into the car for the ride back to Occoneechee, we hopped into the bicycling outfitters right next to the trail head, and picked up a map of the entire trail. The map/brochure doesn’t tell much about this specific trail, but it seems that it is a little over 30 miles total of reclaimed rail bed, with Farmville being right in the middle. The person in the outfitters said that the outbound stretch headed west is a 6 percent grade upward the whole way, with an easy coast coming back downhill to Farmville. Alan had told us he thought it was mostly wooded trail going west, and of course, headed that direction, you miss the bridge itself.
We got back and re-heated our chicken stew for leave-overs, built a fire (still little wind on our peninsula, and quite a lot warmer than yesterday), and enjoyed one of those rare moments when the sun sets just as the moon rises. Got a couple of pretty images of the sunset reflecting off Roomba and the lake, and then noticed the full moon rising over the treetops opposite the sunset. Simply lovely. 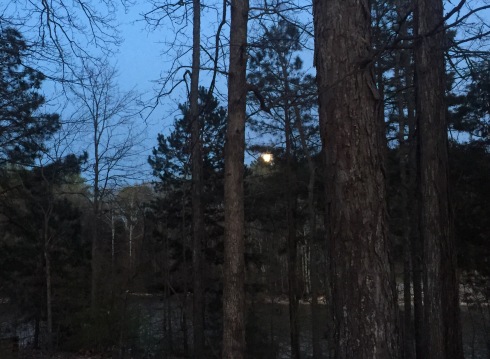 We called it an early night, even though we were eating our dinner at about 8:30-9PM.

High Bridge: In 1854 the South Side Railroad was completed from Petersburg to Lynchburg. To cross the Appomattox River east of Farmville, High Bridge was constructed. The bridge, 2,400 feet in length and ranging from 60 to 125 feet in height, was built on 21 brick piers. The original wood bridge had a pedestrian walkway beside the tracks and a wagon bridge below.

On April 6 & 7, 1865, all southern bridges were of strategic importance to the armies of General Robert E. Lee and General Ulysses S. Grant as they moved westward from Richmond toward Appomattox Court House. On April 6th, following the Battle of Sailor’s Creek, a small group of Union infantry and Calvary attempted to destroy the bridge but were deterred by Confederate horsemen who arrived on the scene. On the morning of April 7, quick marching Union troops came upon High Bridge as the Confederates were setting fire to it after crossing. Using the lower wagon bridge to continue their pursuit, Grant’s men pressed on, eventually coming in contact with Lee’s army around nearby Cumberland Church.

Camp Paradise: Veteran, war-worn, French-speaking “chic Creoles” of the Donaldsonville Artillery detachment of 43 Louisiana Creole Canonniers received orders to guard High Bridge by the Lynchburg Confederate Military District Commander, Francis T. Nichols (a native of Donaldsonville). By June 1864, a bivouac of log cabins were built across the railroad tracks from the Overton house by the Canonniers under the direction of Lieutenant Camille Mollere.
The post, commanded by Major Victor Maurin, was tasked to man the four casemated earthworks fortifications, and their 21 artillery pieces, which covered approaches to High Bridge. Having been “feasted and pampered” by local families of Prince Edward and Cumberland Counties, the post became known as “Camp Paradise” by the gunners of Donaldsonville.
The Donaldsonville Artillery detachment took part in the Battle of High Bridge on April 6, 1865, after which they joined the Army of Northern Virginia’s retreat and surrendered with General Lee at Appomattox. 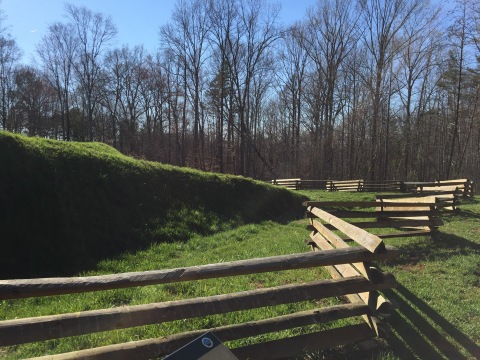 African Americans at High Bridge: Engineer Department Activities. The High Bridge fortifications were built, in part, with the help of area free men of color who were conscripted for Confederate service. The Confederate Congress authorized the draft of free men of color to support military activities. Confederate records indicate there were about 30 black Confederates supporting the Confederate Engineer Department at High Bridge in September 1864. The Bureau of conscription authorized a draft for free African-Americans from Appomattox, Prince Edward, Amelia, Buckingham and Cumberland Counties to support Captain William G. Bender, the engineer in charge of construction of the fortifications. By December 1864, there were at least 50 men engaged in such work. These men were provided Confederate uniforms and blankets due to the cold weather.
While most of the African Americans documented at the High Bridge worked for the Confederate Engineer Department, pension records document men who were servants in the various companies charged with security of the Richmond & Danville Railroad. Records suggest some “Black Confederate” soldiers performed military duties.