So, Jack and I have always had a saying with regard to our travels: If it rains, leave town.
In this case, we’re talking snow, sleet, and thick fog—well, the snow is forecast for tonight, and we got the sleet yesterday morning. But as you can see, we arose this AM to rain, then the fog rolled in. Happily, as we were doing the final stowing of the last of our food and gear, water was not actually falling from the cloud surrounding us.

At about 10A we bade goodbye to the puppies with a Billy Boil full of chicken stew to cook along the way (to be ready for our dinner). I also put some frozen dinner roll dough into the Omnia oven to thaw and rise during our drive, to be baked up and accompany our stew.

Occoneechee State Park is on an enormous lake that spans both VA and NC. The water is an Army Corps of Engineers construction, known variously as Kerr Lake, Bug’s Island Lake, and Clarksville Lake (Clarksville, VA is the nearest town to the Lake). We managed a nice lakeside site with power and water, but no sewer. This is only an issue for us because this is our de-winterizing Roomba trip. So it would be nice to have sewer at the site since we need to not only flush the antifreeze out of the water systems, but also disinfect with a chlorine solution, including a “let the bleach sit in the tanks and lines for a few hours” approach. Because we neither want to nor are allowed to “camp out” at the dump station, which (also unfortunately) has no potable water available for flushing through drinking water lines, we had to enact Plan B.
We found a pull-through site where we could fill our fresh water tank, trundled to the dump station, and pumped out the antifreeze from all the lines into the waste tanks. The outdoor shower has a sprayer/hose that reached directly into the dump station drain, so that antifreeze went directly into the proper disposal area. Then we emptied the tanks of the otherwise collected antifreeze + water and we returned to the pull-through to fill the fresh water tank again, added the bleach, ran it through the lines, and then set up camp to let everything disinfect, in this case, overnight. Not much flowed into the waste tanks, so we’re good for a while on that front.

Our plan is to connect to shore water and bypass the fresh water tank (not using the on board pump) until we’re ready to leave, then empty the bleach water into the two waste tanks, and dump them on our way out.

This trip is our first use of our special “anniversary present” to ourselves: our screen tent/room. The setup of our site (Campground C, Orange #30) is perfect for having our extra room near the water, so when it warms up (as is the forecast) we’ll be able to enjoy our gravity chairs, a nice fire, and the view of the lake. And Jack set it up solo, so it is good to know that it can be a one-person job.

Although the weather at Occoneechee is overcast and chilly, it has not rained on us. We met up with a couple from Raleigh, (Alison from the Altoistes group), passing through en route back to their home, who wanted to see an Alto. From the Altoistes site on FB, we’d pre-arranged this meetup and had given them a general idea of when we’d be there.

They were there in time for our initial setup, so could see the process and once the roof was raised, they were able to see inside, “up close and personal” — a must-do for most who are considering this investment. I think they’re sold! But maybe on a 1743 rather than our model, which is 1713. We were all pleased that it refrained from raining, as they took their tour and we chatted about the mechanics, expectations, needs, and visions of “The Alto Life.” But the temps were in the high 40s, and with the humidity hanging in the air, it was quite chilly to stand around admiring our work.

We did treat ourselves to a nice cuppa tea once all was set up, and we lounged in the “Clamshell” screen room, enjoying the fresh air, leisure, and lakeside perspective. But the sun was setting, and the wind was rising, so we went inside and cranked up the propane heater on a low setting for the evening.

Our friends, Alan and Mary, are going to meet up with us tomorrow and we all might find a nice bicycling loop to enjoy together. And then, we’re scheduled to drive over to have dinner at their house nearby in the outskirts of Clarksville tomorrow night.

Around 6-6:30P, we unpacked the Billy Boil and found that our dinner, set into the “thermos” at about 9:30A was wonderfully cooked and still quite hot 9 hours later. We had filled it right up, planning two meals from the pot during this trip.

We felt, however (probably because of the chill temps) that we’d like it to be just a few degrees hotter, so we took the cook pot out of the insulated container and put just a little heat under it to get it piping. 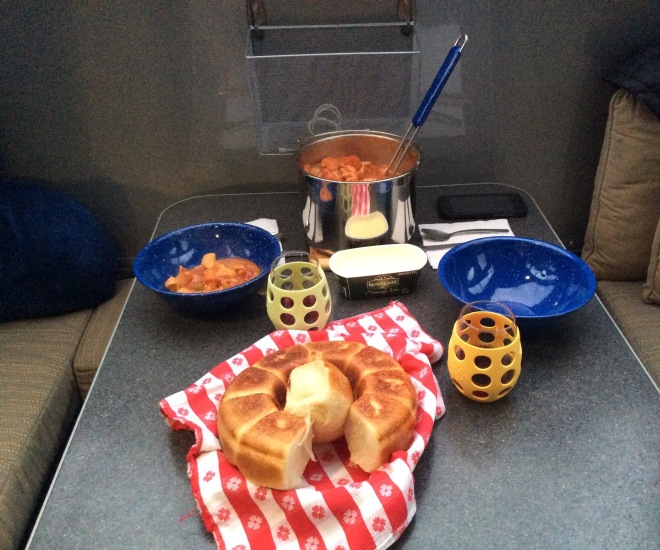 And the dinner rolls had risen well in the Omnia. I put them on the stovetop and soon the aroma of fresh baking bread filled our Roomba. Jack poured a tad of fermented grape juice for us and we toasted our anniversary trip. It was an excellent first night’s dinner. We eased back in the warmth of Blue Roomba’s embrace, and watched the light fade over the water, as the herons, “dicky birds” and osprey found their roosts for the night.

The camping season has begun at last.