Looooong drive from Parc et Mer/Mont-Louie to our destination: Saint-Jean-Port-Joli, and another private campground nestled beside the St. Lawrence Seaway, La Demi-Lieue, or the Half-League. It is right on the water, apparently on a spit of land, so the sub-head for the signage was “Bord du Fleuve” (or “La Bordure du Fleuve”), which means something like “edge of the river, or edge of the spit.” 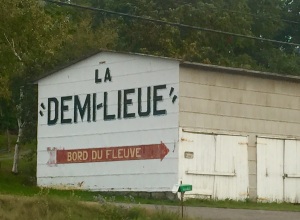 We thought it would take about 4 hours, but we made several stops along the way, hoping to find a really good grocery store, and either a wine store or a grocery store that had a robust selection of wines — but we kept hitting “big box” places with no deli or butcher sections, and nearly no drinkable wines.

I’ve about given up on finding decent beer in Canada. The only micros I’ve tasted that are worth their salt don’t sell anywhere except their own breweries and/or towns, or only by the keg. Evidently, Budweiser is a very popular brand (and of course, Molsen’s) because I could get any variation on the theme in enormous quantities. *sigh*

Next time we come to the Maritime provinces, we’re headed to wherever we can find a beer called “Butcher Block” by a brewery called Tadamagouch (or similar). We had that on the first night of our bike tour, at the Five Fishermen restaurant in Halifax and it was the best of all we tried along the way. Also, I hear that, on the south shore of Nova Scotia is a beer called Boxing Rock that I have to try.

Anyway, it was a totally lovely drive along the coast road. The clouds had risen by the time we hitched and got away, just misting the high mountains. We enjoyed some sun along the way, and I took some snaps from the car.

Later in the day, the clouds came back and it got quite chilly out, but didn’t rain. We could see major changes in the landscape as it moved away from the mountainous Gaspé region, south into more agricultural land. Busy little sea-side (or by this time, perhaps it’s better to say river-side) towns dotted the coastline.

We also noticed a thinning of the St. Lawrence, and could finally see land on the opposite side.

The village closest to the campground, Saint-Jean-Port-Joli, is very attractive and quaint looking, with lots of quirky sculptures sitting around and nice signage for shops and cafés. But it was close to 6PM so we didn’t stop. 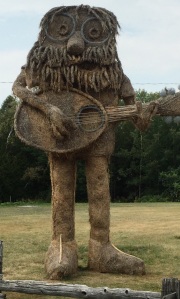 We snagged a simply lovely site at the edge of a small inlet (site #33) and there are few enough folks here that we could use the empty site next door (#31) to pull Roomba up parallel to the shoreline, rather than the normal perpendicular. Our awning faces the water, and there are big rocks that might need exploring in the AM. 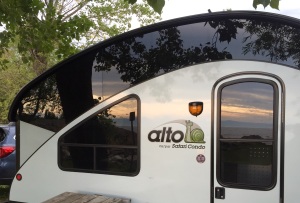 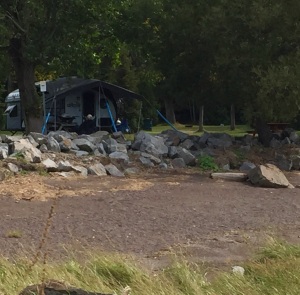 A near neighbor is an Alto owner — Benoit and Gisanne (?) who live nearby, we guess, in Quebec province. They really lucked out on obtaining their model 1743 (fixed roof): they’d put in their order with Denis Messier at Safari Condo this past June, and had put down a deposit. Then they saw one up for sale in the classifieds, and they were something like the fifth caller. The seller had used it once, didn’t like the trailer part and wanted a VR-self-contained (conversion van from Safari Condo), and was selling his brand new, 2016 – 1743 model for the price he paid. They agreed (rather than wait for their own to be built in 18 months), and made the purchase after seeing it.

Denis refunded their deposit and a 1743 has a new happy home, while the new owners are extremely happy. The seller remarked that there had been 10 additional calls after theirs, and he could have sold it for much more than what he’d paid. They realized they were very lucky, and were loving their new baby. This stop was their third trip in their new trailer.

In a larger town en route called Rivière-du-Loup we had found a really great IGA grocery store and got shrimps to grill and a nice white wine to accompany. I fixed some cous-cous and we had a salad with it. Had also gotten a nice wedge of Morbier cheese, but we were pretty beat and only sat outside in the dark watching the lights on the waterway until we finished the wine. Then we hit the hay.

Wednesday: Heard rain on Roomba’s roof so we stayed abed longer that usual, finally getting up around 7:15. The overcast was spotty, so we enjoyed some sun as we leisurely took our breakfast: grilled sausage patty sliders and OJ. Yum.

The rocks in front of our home beckoned, and so I took a scramble across them. The tide was out, but even then, I had to roll up my pant legs to wade into the water rounding one rock-tumbled edge. Saw some fish trapped in a pool along the way, so I figured the tide would rise at least to their level. 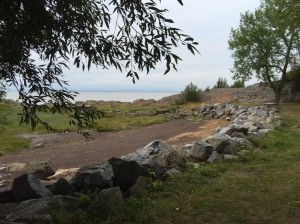 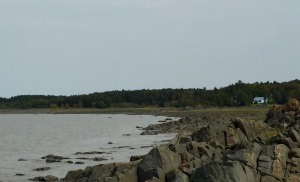 I was right. by about 3PM we saw high tide and it was submerging most of the grassy “beachfront” we were enjoying from our “veranda.”

Long before high tide, however, Jack was watching the forecast, which was for deteriorating sunshine and higher winds. We wanted to get into St.-Jean-Port-Joli for lunch and a look-around, so we rolled up and stowed away the awning, brought the grill inside, and closed down most of the windows and hatches (no more destroyed slippers for me, thank you very much).

We drove into town, visited their IGA (these are excellent grocery stores in Quebec, by the way) anticipating making our lunch before we leave in the AM and eating sandwiches along the way, to save stop-time. Afterward, we parked the car and walked around a bit, and found THE MOST EXCELLENT café for lunch.

Hard to tell exactly what it was called, but I think the name is The Robin Hood, although the sign is as below. We stared at the posted menu for a while, picking out a word here and there, and then just decided to go in.

The waitress didn’t have much English, but the cook did, so she came out and explained their specials board. I ordered the “Mexican” omelette, and Jack had a grilled ham and cheese and leek soup.

Wow. There was a hint of maple syrup in the leek soup, which added a very special edge to the flavor. My omelette was fluffy and chock full of sautéed veggies, all cooked to perfection and topped with cheese. Why it was called Mexican, I never could guess because it wasn’t spicy or full of ham or beans or anything one might expect. Fresh bread was served with the soup and my omelette, and we had a grand lunch.

The predicted weather was obviously rolling in so we headed back to Roomba as the wind picked up. The rain held off for a while, and then came for a short shower, and just when we thought it might be over, we saw it rolling in from the west with the risen tide. It was pretty spectacular, raining horizontally and blowing all around.

After the squall, the clouds stayed as the sun set and our end of the campground suddenly was crawling with photographers and lovers and dog-walkers to see the truly spectacular sunset. Even when everyone had left, the miracle of nature wasn’t done yet, and we enjoyed a second sunset as the sun reflected off the clouds. It was truly awesome. 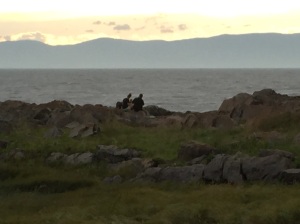 We did sit outside after our dinner of leftover pasta and enjoyed the Morbier and Port. The wind was calming and the temperatures rose a bit and it was a splendid evening, indeed.

One thought on “Saint-Jean-Port-Joli, Quebec”