Today we left PEI and headed back to Nova Scotia, making our way to Cape Breton. We left the Inn at St. Peters via van and bike trailer with our final ride with George, who’s been so helpful while we’ve been on his home island.

Once we got to the Northumberland Ferry at Caribou, we rolled the bikes away from PEI and we were passengers on the same ferry we’d been on getting from Pictou to PEI just four short days ago.

On the other side, however, we rode our bikes into Pictou (known as the Birthplace of New Scotland), and down to the harbor to visit the Hector Heritage Quay, an interpretive center plus a full-sized replica of the Hector, the ship which brought the first wave of Scottish immigrants to Nova Scotia in 1773. 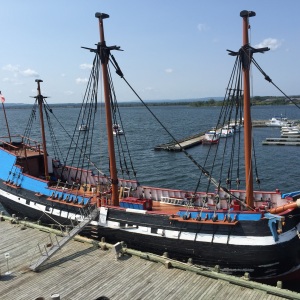 We picked up two additional vehicles and four additional non-riding (mostly) “Friends of Allen” there (Jerry and Gloria and two others), and also our Freewheeling Adventures driver/coach Nick, and the big Freewheeling van (again) there.

Some shifting of gear and bikes had to occur, because Bruce and Linda also picked up their van at the Pictou Ferry Harbor, and Bruce really wanted to see the Celtic Music Interpretive Center, about an hour’s drive from the Hector replica, but still en route to our night’s stay at Mabou (pronounced Maw-boo) on Cape Breton. 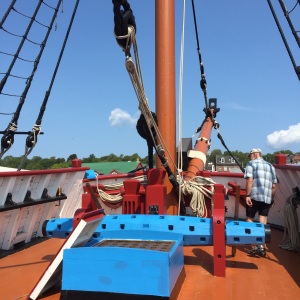 So while the gang rode bikes to the actual site of the Hector’s landing, Bruce, Linda, Jack and I explored the exhibits at the Hector quay and took a very quick look inside the ship, then we piled into their van and split from the group to do some Celtic Music exploration and lunch.

We had a blast at the Music Center, and ate some delicious fish tacos while listening to a brilliant fiddler accompanied by a very talented keyboard player, who infused some of the fiddler’s jigs and airs with exquisitely complementary jazzy flourishes. It was a total hoot. After the young woman finished playing, another quite talented fiddler took the stage, and he was quite a different style of player (don’t know enough to explain exactly how he was different, but his bow left the strings for longer “pauses” or “jumps” than the woman’s bow ever did). They were three excellent musicians. 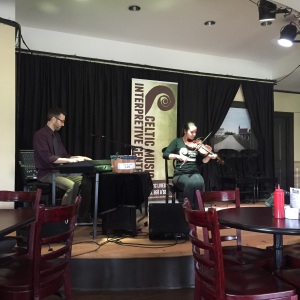 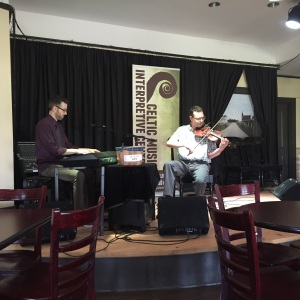 We explored the exhibits at the Center for a while, and Allen had suggested that I’d have the opportunity to actually pick up and hold a fiddle if I went along with Bruce and Linda. This, oddly (for those who know me) has been a longtime dream of mine — to hold and actually bow a fiddle, just to see how it feels. 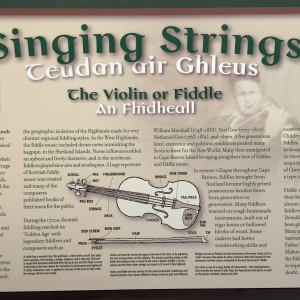 Well, I got do do just that. It was very fun, and there was a video that made great efforts to teach me 3 notes, that combined in certain order, would make the first six notes of some famous Scottish air. I never got it quite right, but the video was only 8 minutes long. I was gratified that no one except Bruce and Jack were there, and also that it only sounded like I was torturing a cat a few times during the “lesson.” I had a total blast.

Then the three of us tried to learn some flat-footing steps from another video. Maybe we were tired or (more likely) it was the beer with lunch, but we were all completely awful at dancing jigs. Happily no recording was made of that attempt.

The group was booked into a place called The Red Shoe for an early dinner, so that we could nearly fill the place for live music and not disrupt their Monday routine too much (the “Friends of Allen” tour group had pre-ordered our entrees). So Jack, Linda, Bruce and I clambered back into Bruce’s van for the drive up the road to Mabou and our lodging for the night: the Mabou River Inn, where we linked up again with the remainder of our pack, who had ridden in the Freewheeling van (and various support vehicles) to meet us for our early dinner. 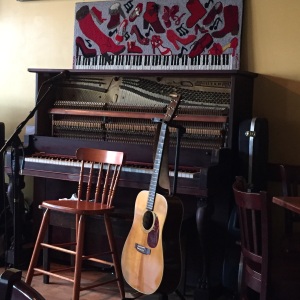 I had a splendid meal of meatloaf and Jack had fish ‘n chips, and the guy singing for the early evening did all types of tunes, including Celtic (of course) but also pop tunes to which we all sang along. Songs everyone knows like City of New Orleans, Country Roads, and I asked for Black Velvet Band and it seemed like everyone in the place knew it, too. I had a blast belting out choruses with the best of them. 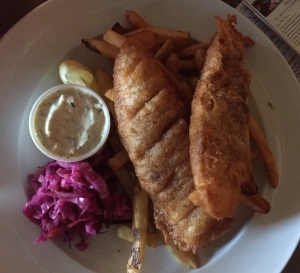 Oddly, there were several tables of Yanks there, including a big contingent from Ohio (about six of our group are from OH).

It began raining as we ate, and although we could have stuck around for the “jam session” that was expected to happen later in the evening, most of us were a bit tired so we got up to walk back up the road to the Inn.

The Red Shoe’s owner was clearing up our table as we discussed riding or walking back, and the rain let up, showing off a rainbow.

The Red Shoe owner asked how long a walk we were facing and offered to give us a ride, but we mentioned the Mabou River Inn, and she told us about the Shrine.

Behind the lodging building is a teensy chapel filled to bursting with lighted candles and the images and icons you might expect from a Catholic holy place or memorial. That’s because the Mabou River Inn structure was once run by monks (not sure what order) who set up a living space for mentally challenged people of all ages. Back then they would have called it an asylum.

Over the years, the order died off, and I think that the “Shrine” was erected after that time to honor the work that these specific monks did for the community. The family who has taken over the Inn had worked with what was there, so several of the rooms are very long and very narrow. It was a fun place to stay and learn about.

One of the Inn’s owners is a baker and the next morning, after a night of stormy weather, he baked us fresh biscuits and cinnamon rolls that were truly extraordinary.

But the evening walk back to the Inn after our Red Shoe dinner and sing-along was lovely, and we tucked in a bit early in prep for our next couple of challenging days of riding. Here we come Cabot Trail!

One thought on “Leave PEI – On to Cape Breton”