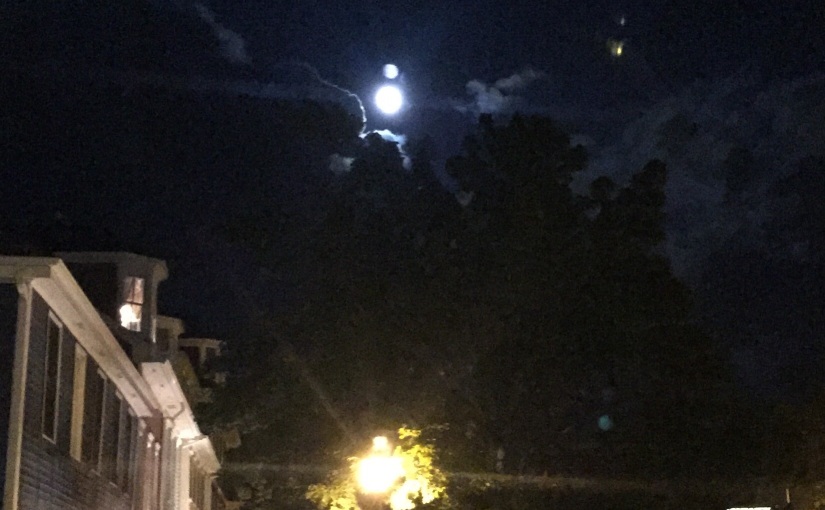 Thursday, August 27: Troop Movement Day
All of this day of the tour was devoted to getting our bicycles, gear, suitcases, and selves off of Nova Scotia and onto Prince Edward Island (PEI). We left the Victoria Inn pretty close to our target of 8:15AM, and the final task of Freewheeling until we get back from Cape Breton was to haul everything to the Ferry at Pictou Harbor, and Caribou, NS.

It had rained overnight, and the sky was thick with impending rain. Still, it managed to hold off until after we made the ferry crossing (saw a seal and a porpoise, but no whales). As the enormous ship entered the PEI dock, about a bazillion cormorants were sunning on the pier and as we approached, some of them got nervous enough to fly away. 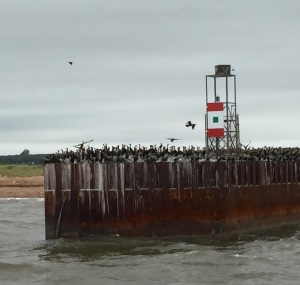 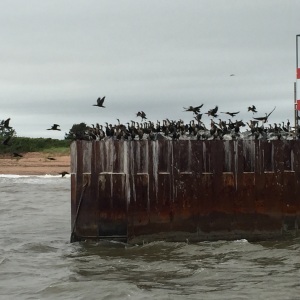 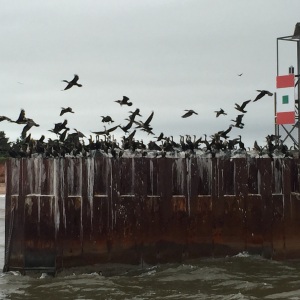 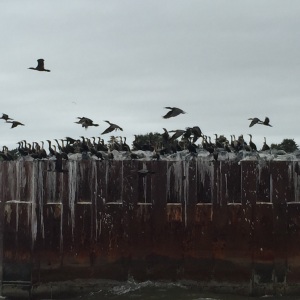 Our bicycles were parked on the lowest level of the ferry, next to all the semi trucks and huge tour busses headed our way. It was interesting and somewhat frightening to be with these enormous vehicles — happily, they let us off first.

We met with our support crew, George and his son, Daniel, with a trailer into which we stacked our bicycles and all piled into the vans for the ride to Charlottetown. Allen and Mary drove the “Starship Enterprise” so we made quite a convoy. 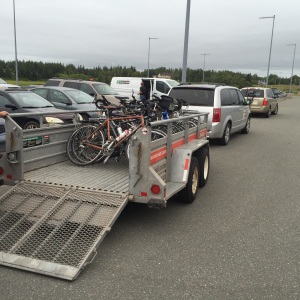 As we rode, the heavens opened up and all the pent-up rain came crashing down. George recommended a local eatery, so we donned our various rain gear and all ate lunch at Pappa Joe’s — a fave of the locals. The food was quite good.

Still raining and filling the streets like bathwater as we left, but by the time we crossed Charlottetown, it had stopped, and we left all the bikes on the trailer but unloaded our suitcases at The Great George right in the heart of historic Charlottetown.

Once the rain let up, it was fun walking around Charlottetown. There was a blues and jazz festival happening down by the waterfront, and the restaurants appeared to be packed with visitors and tourists. 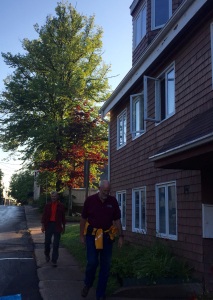 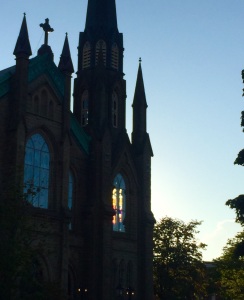 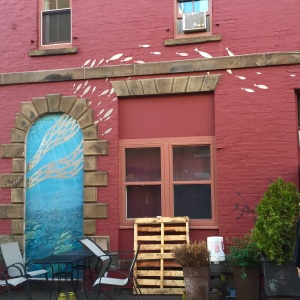 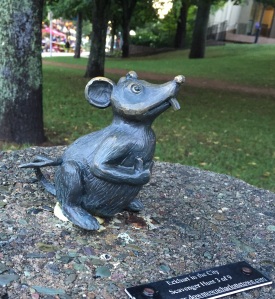 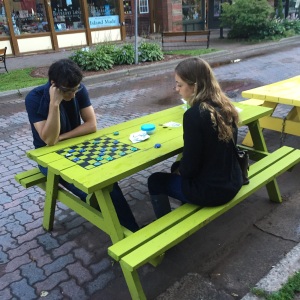 We paired up with Gaye and Woody, Linda and Bruce (although Bruce went to hear a jazz concert and only joined us later) for our dinner, and we had a fun time walking around. Finally settled on dinner at John Brown’s, on what they call Victoria Row. 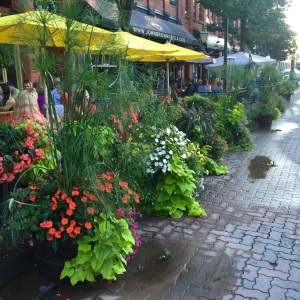 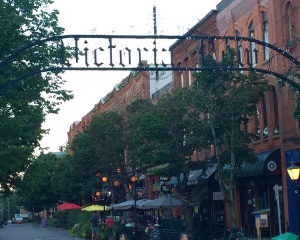 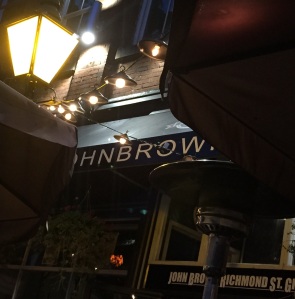 We ate outside and Jack and I had some of the best meals of the trip so far, while the others felt their seafood chowder was a little to creamy and thick and a little to light on seafood. I had a pulled lamb sandwich with a salad, and Jack had perfectly cooked salmon and some of the famous PEI potatoes.

Just as we were paying the bill, the rain began again, so everyone eating outside along the entire street was picking up their meals and heading into the restaurants or under a larger umbrella. It only lasted a small while (even though it got seriously heavy at its peak), and we managed to capture the rising full moon over the glistening night streets. 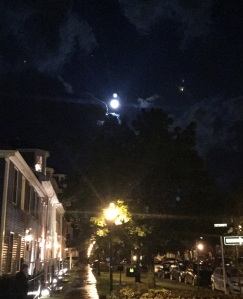 Charlottetown/PEI History: The largest city on PEI and the capital of the province, Charlottetown is widely noted for being the seat of the Canadian movement for unification as a nation. Between September 1–8, 1864, Charlottetown hosted what is now termed the Charlottetown Conference. a week in which delegates from PEI, Nova Scotia, New Brunswick, and the colony of Canada met to discuss ideas, challenges, and agree in principle to the unification of the colonies. 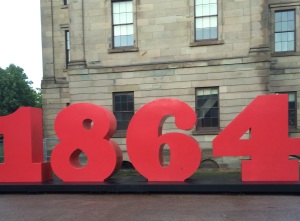 Although many of the meetings and negotiations which would lead to Canadian Confederation were held in Charlottetown’s Province House (closed now due to renovations), various social events spilled over into the surrounding community. The Dominion of Canada was declared on July 1, 1867, with the passing of the British North American Act.

An exiled Acadian community came to PEI from NS but were a small group mired in poverty in the profoundly British PEI for many years until the Farmer’s Bank started up and became a micro-lender for the Acadian farmers so they could rise from their destitution. This became the first of what we now know as “credit unions” in North America (more on that tomorrow).

Aside from being the seat of colonial government, the community came to be noted during the early nineteenth century for shipbuilding and its lumber industry as well as being a fishing port. The shipbuilding industry declined in the latter part of the nineteenth century. In August 1874, the Prince Edward Island Railway opened its main line between Charlottetown and Summerside. The railway, along with the shipping industry, would continue to drive industrial development on the waterfront for several decades to come.

PEI was the first Canadian province to finish its section of the Trans-Canada bike path, and has converted all possible rail beds into bicycling/multi-use paths. There are still some sections that do not “meet” across waterways, but the infrastructure and attitude toward cyclists is quite good.