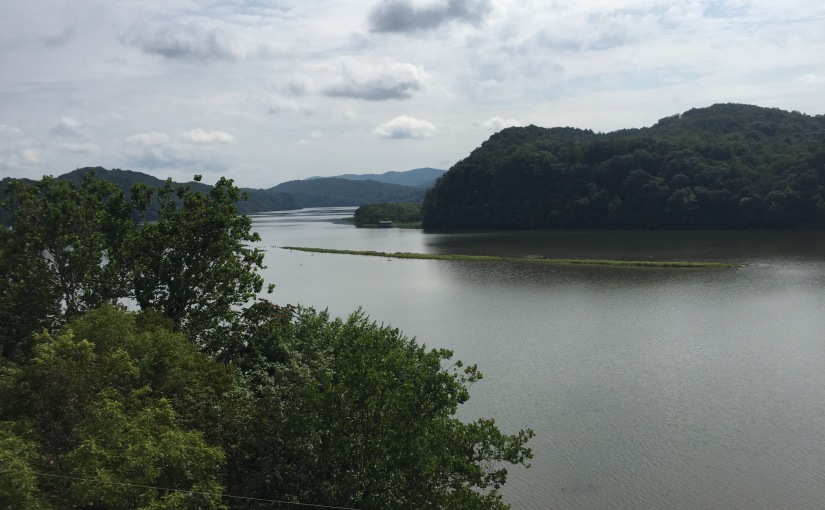 Our third adventure with our wonderful camping trailer, Roomba, is a prelude to our Big Trip to Nova Scotia and the bicycle tour we’ve been planning for over a year.

We also wanted one more trip in Roomba with the doggies, since we’re not going to see them for a month. This idea conflicts with our intended training schedule: to head down to the New River Trail, our “hometown” Rails to Trails conversion, and ride it stem-to-stern on back-to-back days. This places our butts in the saddles for about 47 miles, which translates into a 5-hour day with a lunch stop. Times two.

So we didn’t want to leave the dogs in the Roomba or at home; nor with a kennel — so we conspired with friends to have a group camping experience at the New River Campground in Fries, Virginia (it’s pronounced “freeze” for you non-swva-ers). Gloria & Kerry like my dogs, and have one of their own, so Glo agreed to be the dog-sitter over the two days of our being on the trail. In addition, Jack and Martha recently got a camper van and they got pursuaded to join the fun and come with.

On Sunday afternoon we all arrived and hooked up and began sharing adult beverages, lies, and tall tales.

Monday (today) was the first of Jack’s and my cycling adventures. We got rolling around 9:30, and loaded the bikes on the car hitch for the drive from Fries to Pulaski, the opposite terminus for the trail (it also goes off toward Galax, but that ‘s a spur. At “Fries Junction” you can choose to head right to Fries or left to Galax — if we’d done both spurs, the total distance would have been approx 50 miles).

We left the dogs in Glo’s competent care and drove to within 2 miles of the downtown Pulaski terminus and began our trek in a sunny, only slightly overcast morning about 10:30. 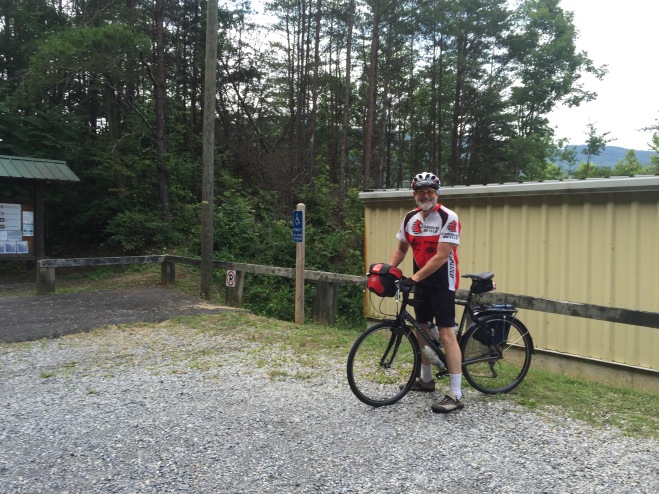 We sincerely love the New River Trail and we’ve spent many miles traversing it. The scenery is quite fine and varied, and when we’re running our training rides there we try to not only stay in the saddle for many hours at a stretch, but also keep our pace higher than what we can manage when we’re riding the BRP. But we charged our panniers with lunch and rain gear and set off. 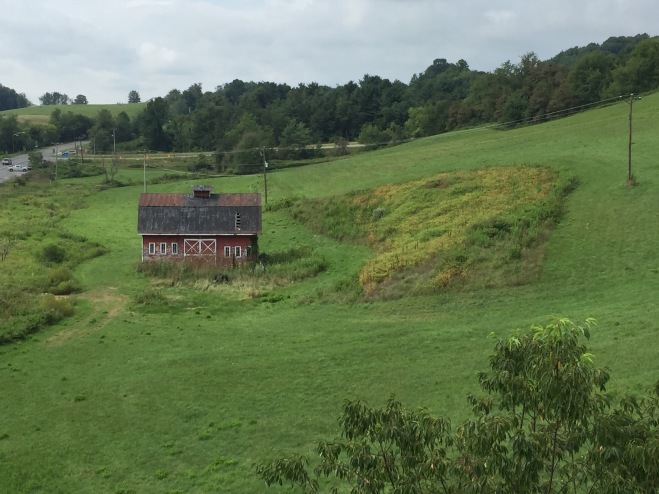 As we were trundling right along we were surprised to see fellow Floydians on the trail! Penny, Sue, and Shirley were taking a break along the trail between Draper and Hiawassee. We hit the breaks hard and circled back to say howdy. We chatted a while about bicycles, and places we ride, and those pesky pressure points where the human body meets the mechanical bicycle. Funny to run into folks from the old hometown a good 40 miles from home.

We made our way along the trail, across trestles and through tunnels until we arrived at Foster Falls, where we exited the trail, found a picnic table, and had our lunch. From about 12:30 until our finish time of 1:00, we watched dark clouds mound in the sky and just hoped that they would be moving toward Pulaski instead of toward Fries.

As we began the after-lunch portion of our ride, some thunder sounded, and a few drops began to fall. Rain had hit the trail earlier, we could tell from the footing and puddles. But we still had hopes that we might not have to endure.

WRONG. No more than about 5 miles into the afternoon, the heavens upened and began truly dumping on us. IT got dark, and the wind shifted to be in our faces.

Nevertheless, it was not cold. So I never had to break out the rain coat. As Jack says: “You’re as wet in the first 45 seconds as you’ll get all day, so why bother?”

We escaped the deluge at Ivanhoe, long enough to clear our glasses and wipe the sweat rinsing down our faces and (mostly) into our eyes. The rain let up a tiny bit and we set off again.

Passed the Shot Tower, as Interstate 77 traffic roared overhead, and we knew it was exactly 15 miles to Fries Junction. It was along this stretch that Jack began experiencing mud build-up under his fenders and between his rims and his break pads. He began having to stop and remove the interference on his wheels’ ability to turn (and his breaks’ ability to stop him). I managed to keep rolling and arrived through the dark and the wet at Fries Junction about 10 minutes before Jack made it.

We had a bit of energy boost, drank some water, and then set off again for the final 5.5 miles to Fries. The rain finally let up from deluge status to sprinkle as we climbed up to Main Street and wound our way back to the campground. Then it began raining again; stopped long enough for me to get into the shower; but was pissing down again after I got out and had dry clothes on for the first time in 3 hours of hard, soggy, riding.

The Hiltons made us all dinner, which we enjoyed tremendously (we provided a bit of an easy appetizer of frozen shrimp and cocktail sauce). And as I write this, Jack and I are inside Roomba with the doggies, listening to it rain on the roof again; wondering how much fun we’re going to have riding again in the rain tomorrow, back to pick up the car in Pulaski.

At least we will be riding with the flow of the river this time, so the grade is generally downhill.

4 thoughts on “Training for Nova Scotia”