(We were out of internet range for nearly a week, so this is what I wrote around Friday, May 8, just now being uploaded.)

It was a long drive from Ashuelot to Lakawanna, so we had anticipated a late arrival, and only two nights there, so we did our grocery shopping before leaving that lovely market near the Ashuelot Campground, the Market Basket. Got a cold, pre-cooked meal to have upon arrival in Lackawanna, and arrived around 5PM, set up (to the extent we planned, i.e., didn’t unhitch the car and didn’t set up the awning), and ate chicken fingers, a nice broccoli salad that reminded me of John McEnhill’s very popular creation — and threw a few potato chips into the meal mix for good measure.

There were no road-style or cross-bike adapted biking trails of any note, although the park map boasts 15 miles of mountain biking trails, which they call multi-use trails to include hikers and horses. In addition, there are miles and miles of hiking-only trails, plus many water sports opportunities including fishing, canoeing, kyaking, and electric-motor boating. It’s a great little park that we’ve spent lots of time in, over past stays, and could recommend it to anyone. Right at the end of this missive, I’ve added what the brochure told us about Lackawanna, its lake, and some of its history. If you’re not into that type of thing, you don’t have to read to the end. 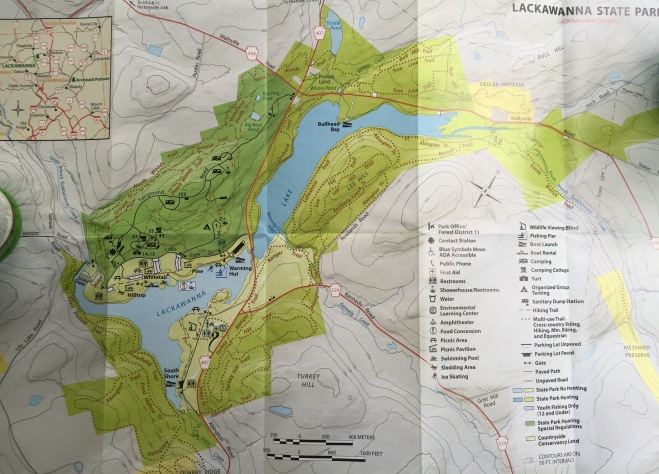 On Friday, May 8, we rode around the State Park, staying on the paved roads, messing about, seeing lots of day-users, and checking out the general scenery. We only put about 5 miles on our yearly totals. Jack saw a red fox on a camping loop that was still closed while workers cleaned up for the season (but they didn’t seem to mind us pedaling about). The loop, appropriately enough, was called “Fox Run.” From the same area, high above the lake, there was a pretty scenic viewpoint where we sat for a moment. 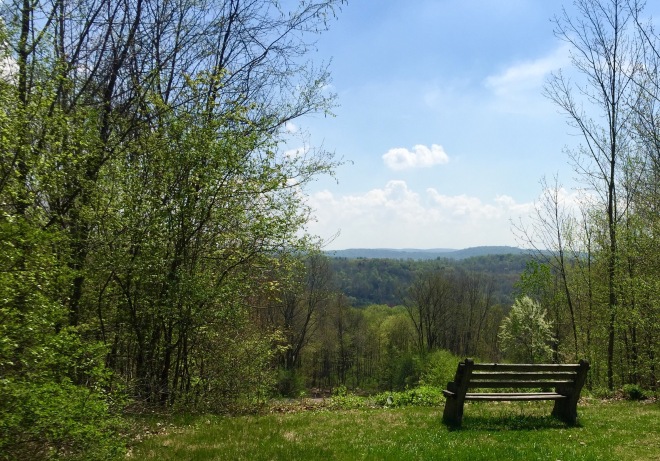 We couldn’t ride through all the picnic areas near the lake, as there was some major construction going on to create a “splash park” for the area — one of those areas where fountains of water drench the (mostly) kids who play and climb and pull ropes and suchlike. But in one of the prettier picnic grounds we stopped and played with panorama photos on the iPhone for a while.

We’ve begun to call the front window of the Roomba our “skylight” because you can look straight up into the sky when you’re sitting at the little breakfast nook where we seem to always take our tea and coffee. When the weather is okay and bugs aren’t too bad, we set up the camp chairs and have our morning beverages outside.

We had a short walk to the bath house at this campsite and we walked past a sweet little woodland flower that I wasn’t able to i.d. — maybe some of my wildflower-savvy friends can tell us what this is: 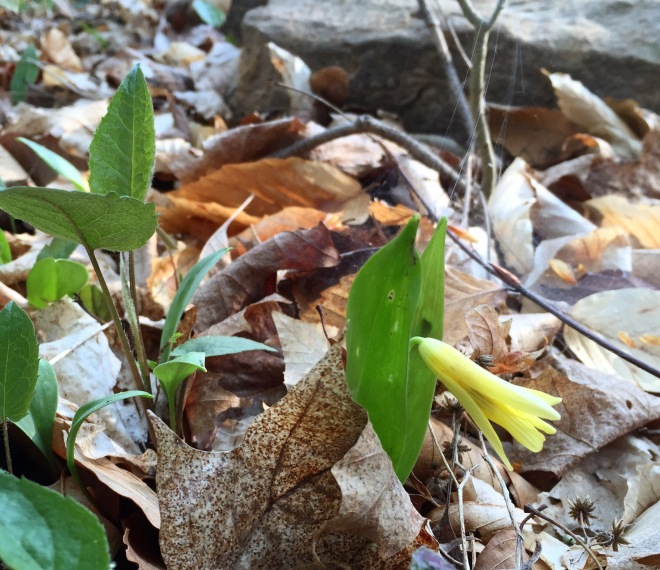 Because we left the Roomba hooked up and never left Lackawanna, we never put up the awning, and the sun on the door-side of the Roomba meant that when the outside temps got into the 90s the afternoon of our short ride-about, we tested the AC but found that it could not cool the interior of the camper when sucking in air that had been heated that much. So we turned on the exhaust fans, set up the chairs in what shade we could find, sprayed with bug juice and  just had to wait until the sun went down to cool off – ate lamb chops and asparagus on the grill and a packet mashed potatoes (brought from Ashuelot) for dinner and readied for our next stop: Pine Grove Furnace State Park, near Gettysburg, PA.

Laka-wanna is an American Indian word meaning “the meeting of two streams” and became the name of this valley. An important American Indian trail linked the Lackawanna Valley to New York State. In the early 1800s, settlers followed this path and built farms in the valley. The trail became old PA route 407.

In 1898 area farmers formed the Maitland Fair and Driving Park Association. Annual fairs and horse races attracted large crowds for 12 years. The racecourse was in the current park’s camping area, on the Woodland Ponds Trail. In 1912, the DL&W Railroad purchased land to create a reservoir, which was never built.

The land was leased to farmers until 1946 when Robert Moffat, a prominent Scranton coal operator, purchased the land and rented it to his employees. In 1968, the Commonwealth of PA purchased the land and developed it into a public recreation area whose primary attraction is Lackawanna Lake, the meeting place of many streams. The park was dedicated on June 10, 1972.