So we had a very long day at Safari Condo on Tuesday, when we picked up our Blue Roomba. Denis was very patient and tried to get us through the “training” quickly, but we had so many questions, it must have driven him totally mad. He never showed it, though.

We first saw our little baby Roomba with a big red bow on the bow, and that was very fun. We checked out the interior improvements we requested (extra storage in the loo with a shelf actually applied over the toilet; no microwave and that area converted into storage), and then got to the business of climbing our very steep learning curve. This ain’t like tent camping, I can tell you. 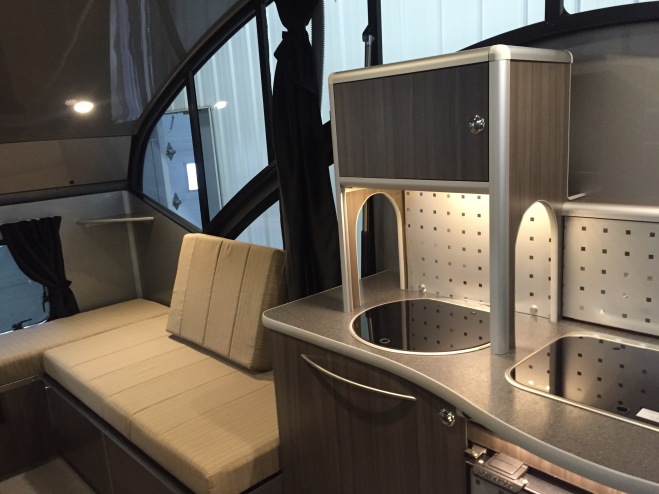 We (of course) took the required pix of us and Denis in front of our new baby, with bikes en suite, and then we were totally on our own. YIKES! 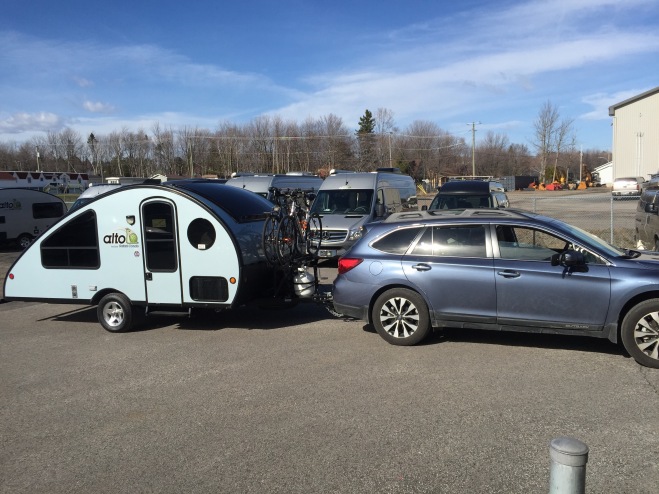 It was later than we’d thought we’d be when we left Safari Condo, so once we made it through the Jackman, Maine customs/border crossing, with a lovely chat about bicycling in Maine with the officer in charge, we headed into the town of Jackman.

Warning to anyone traveling that road: it is absolutely horrible, pocked, pitted, and buckled by heavy truck traffic and what must be horrid winters. Really rough way to learn how to tow a trailer weighing nearly a ton behind a smallish car. In our experience, even if they say you can go 50 or 55, you certainly don’t have to and probably don’t want to.

The scenery was quite fine, however. We traveled along a river but the forest was definitely winterized. Lots of snow still among the trees, and rough looking evergreens being the only greenery we saw. Not much had begun to bloom or emerge with spring growth at this point in their season.

We’d asked about reservations at Jackman Landing Campground back in Feb, and they said that April was their flood season so they didn’t take reservations.

But we stopped there anyway, as we were tired and ready to stop driving. While things were definitely spongey and wet, and certainly the lake was very high, there was some decent ground to park on, so we did, paying the proprietor $10. With the geese and the other water birds, we shared a resting spot that was quite glorious for the few minutes we had before the sun set.

Leveling before raising the roof. 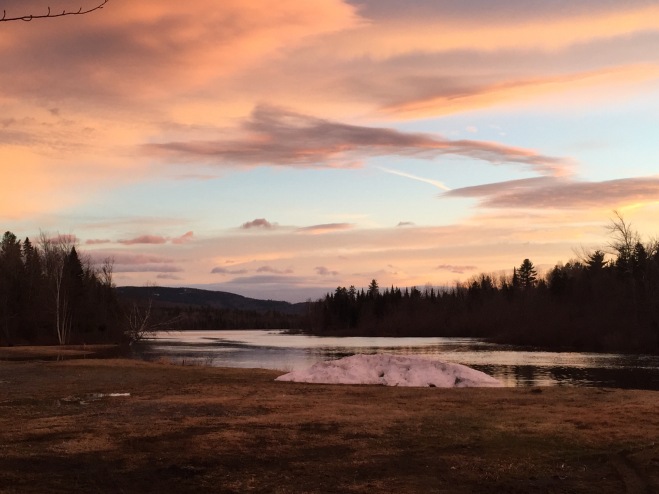 Lots of snow still in evidence.

So this was our first un-hitching, late and we were tired and hungry — but we managed.

Got to a place that sold everything from bottled water and Maine Kitche to beer & whiskey — and they had a deli type place, whose workers were kind enough to take pity on us southerners and make us a pizza, even though they had just closed.

We took the pizza back to the campsite, opened our celebratory bottle of wine, and toasted our first day abroad with our Roomba. Very fine.

The site had electricity, but no water, and we were staying for only the night anyway, so we got away not terribly early on Wed AM headed to Freeport, Maine (home of LL Bean).

Found another place with a deli/food service place tucked back among the hunting and fishing equipment, which was behind the tampons and chips, and ate brunch. A major qualifying characteristic prompting our stop at this — what appeared to be a hunting outfitter — was that there was a large enough parking area that we didn’t have to back the trailer to get out again.

The road improved about halfway to Freeport, but was still like a roller-coaster in some places, so we experimented with the trailer’s load, and piled more of the heaviest things along the trailer’s axle and things seemed to be almost like we weren’t towing anything for a bit. But the quality of the road is a key element to feeling comfortable about towing, we’ve learned.

We seem to be the only peeps at this campground in Freeport — Recompense Shores or something weird. Even though we have a reservation, no one is in the office, and all the showers are locked up tight. So we picked a spot that looked open and flat (and not too wet) and are happily ensconsed for our days two and three, right next to the water. After setting up we had enough time to pop into town for a microbrew and a visit to the grocery store; and to begin to find places in the Roomba where all our trailer stuff will be stowed. More learning curve climbing, but this is the fun bit — the part we’ve been puzzling about and thinking about since last August when this route began to be mapped for us.

It is a glorious world we live in, and that world is full of wonderful, friendly people who are often quite willing to help a couple of travelers out.

Is this life great or what?

After our dinner of seafood and cask conditioned microbeers, we turned on some of the Roomba lights to show what the solar-powered battery can accomplish. 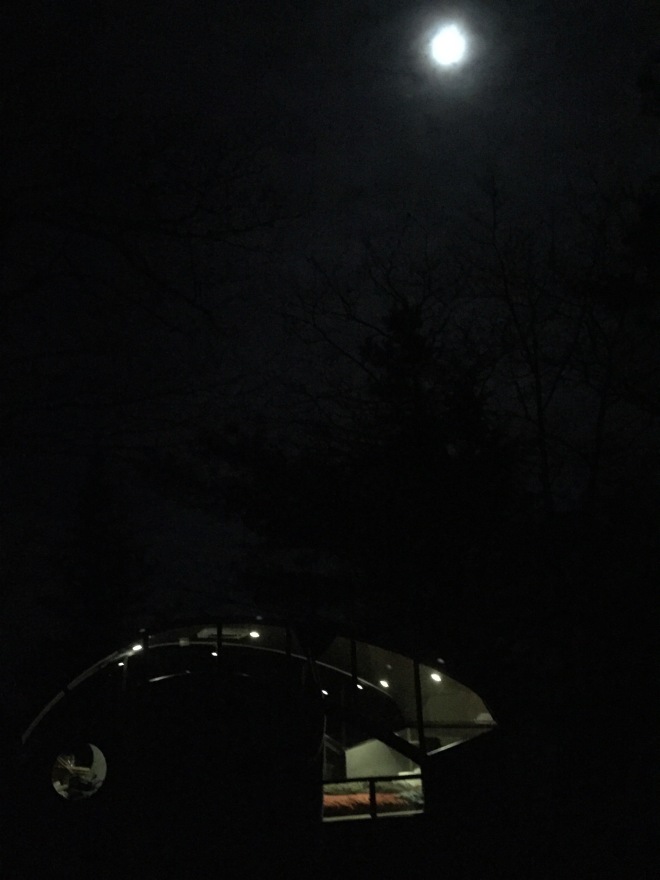 A full moom in Roomba Land.