I totally neglected to write you a note this AM before we headed out to see more of Stockholm. I’m very glad you were able to get back on board late last night.

I don’t know what the issue with your knee might be. No dancing occurred while you weren’t looking, I promise. J&I feel pretty good, overall, today. Even the dicey hip of yesterday was in better shape. Musta’ been all them stairs, doing for your knee, old boy.

We started our Stockholm Day Three by heading to the enormous ferry port from where we will depart at 7AM Monday. We wanted to check out the tube/underground station and the timing to get ourselves there. The friendly front desk person suggested we should call a cab. But with this handy Stockholm Pass being good through Monday AM, we would prefer to use the pre-paid option, if at all possible. We discovered that it is, in fact, possible.

After we sussed out what our Monday morning will look like, we headed down to the bike rental place, Bike Stockholm. It took a long time, being Saturday and all and the guy was alone handling all the rental requests. When all was said and done, we were headed to that big park area that we could see from the cliffs yesterday, called the Djurgarden. Our over-busy guy directed us to a spot inside the garden for lunch, a place called Rosendals Slott, where you could get a nice plate lunch and eat it in the orchard.

Had another great sammie, similar to what we’d been able to pick up in the old town with you, and it was a very nice sit-down. We rode along/around the park, and while there were tons and tons of other peeps also there, we got away from the hugest crowds the longer we pedaled.

The north side of this park runs along small bays and canals, rather than big harbors or open water. About noon, we thought about you and the Europa getting ready to be (or possibly already) underway to Helsinki. Wish we could have heard your exit horn, and waved you away. Stockholm is just too big! But we did think of you guys hauling up anchors and about-facing in the harbor. Hope you and your guests all have a great time in Helsinki.

A really cool series of art exhibits were on display at a palace in the park called Prince Eugens Waldemarsudde. Poor prince Eugene never married, but was quite a collector of art, and even an artist himself. So he built this lovely home on a high point in the park, and filled it with beautiful art. When he died he gave the grounds (beautiful gardens, too), buildings, and all the contents of the home to the citizens of Sweden. They’ve renovated and restored it, and now big parts of the palace are used for exhibiting rotating shows. There were two artists on exhibition today, and we also saw the permanent collection (including some paintings byPrince Eugene himself) and the palace interior, with its furniture and fittings, is also open to the public. If you ever get back this way with time on your hands, it is well worth the effort to get there.

We returned the bikes to the rental place by 6PM as required, then took a long walk through several additional parks en route hotel-ward. Bought some picnic stuff along the way and had an inexpensive meal in the room (no alcohol, obviously, given the modest price tag).

Hope your knee gets better quickly. I hate thinking that our wonderful day yesterday had to be “paid for” with you gimping around for the next week.

Thank you again for the tour, the dinner, the fun, and the company. 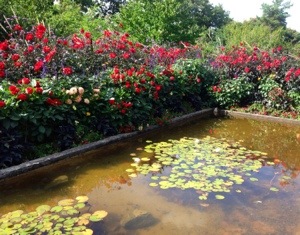 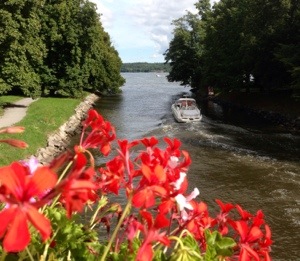 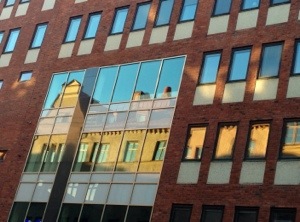