Hard to believe, still, but we finished the building project yesterday, and moved the birds into their new, permanent facilities. Yay!

Again, started early by placing the privacy lattice onto the free-flight pen for CJ the falcon. The lower wire had to be installed first, because the lattice needs to pinch the wire down where it cannot be tied to the hoops.

CJ has a box that is built into the house through what started as a window. Jack built that piece the other day, and we put in shelf perches and plastic “grass” coverings for him to stand on. That opening is wide, facing north, so we wanted an easy rain-management system so the rain and snow wouldn’t just drip/fall off the lattice right into the open box. So we secured Coroplast along the lattice, the width of the opening, above the box.

It took a while to fiddle the “triangle” of wire up to the apex, get it cut and secured.

After lunch we completed the wire along the front of Cade’s (red-tailed hawk) space. He’s tethered and has a jump box with a high perch on the top. Cade hardly ever gets inside the box, and he really likes getting up as high as possible.

Both birds were sitting on perches above the site on the hill as we worked, where they could see what was going on, and where I could keep an eye on them.

His end “wall” had to be pieced together bit by bit because of the door as well as the ‘triangle’ at the top. Each segment was fitted, cut, and attached. We were fast running out of UV-protected (expensive) zip ties, so we were joining most of the wire-to-wire overlaps with “J-clips.”

Cade on the hill was getting restless, as he usually does as the day wanes, so we finished up his wall, got the stall mat placed, filled his bath pan and put him inside. We listened and watched as we finished CJ’s space, with shade netting, a couple of alternate perches, etc.

Again, the shade netting was fiddly, because it’s a temporary installation. We will order custom-cut cloth when we return. But he still needs a barrier between himself and the wire because he’s free-lofted (not tethered). There was a 4-inch space at the bottom that the material would not cover, but I think that will be okay, because the netting is see-through enough that he can be most anywhere in the space and still see out and watch what’s going on around him.

When we finally got everything up, I picked up CJ and carried him through the storage building and into his new digs. As I removed his leash and jesses, he was immediately attracted to the box. I set him inside on the perch, and he got all “chuppy” with me, a sure indication that he was contented.

We left the old wooden ladder we’d been using for the work inside his space for a taller perch, affixed with patches of plastic grass on the top and the “shelf.” He also had his favored bath pan and a tree stump, both from the old enclosure.

But he was so happy with the box that he stayed in there, investigating and chupping with pleasure so I was able to sneak a lump of meat for his dinner over to the stump, and exit without disturbing him.

CJ loves his bath, so he left the box and went directly to the pan to anoint his new space (another sure sign that he feels secure and happy). He had a splash and then saw his dinner, took it to the top of the ladder and ate, then went back to the bath.

Cade also ate, and I discovered that one of his pipe clamps, at the bottom, was positioned too high, so the ring caught on it (it was a thick, plastic clamp) and he was unable to free the ring. He couldn’t get to either of his perches, where he likes to eat, so I had to run in and free him. After he was finished eating, I removed the clamp. I’ll have to decide whether I need to replace it or not today. Replacing means removing the Coroplast panels around the bottom of his jump box, crawling underneath, and re-positioning the clamp lower, so the ring, resting on the kick board at the ground, won’t have any chance of catching on the clamp.

We didn’t have any rain while we worked, and we finished up by about 6PM (started circa 8AM). I stayed to watch a bit longer, and from our porch, we can see the site, can hear Cade’s bell and ring/pipe noises, and continued to monitor through dinner and dusk, when the birds settle down for the night.

I checked them again early this AM, and all’s well. Evidence shows CJ spent the night inside the box; and as usual, Cade spent the night on the highest perch he can get to.

**sigh-of-relief** I have a whole week to watch their behaviors inside their new spaces, to mitigate arising problems (there are always unforeseen fixes that have to be made — some big and some small), and to assure that they will be safe, secure, and happy during the time I’ll be gone.

And, we can devote some attention to the myriad other chores needing doing before we leave.

The front porch on the building, part of what we paid the structure company to accomplish, will be built starting tomorrow, and they don’t think it will take more than a couple of days to complete. Once that’s done (I’ll have to remove the birds during the construction, but can return them to sleep in their houses), I’ll install a feeding chute for CJ, so our house and animal minder won’t have to go in there at all. 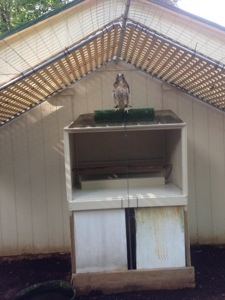 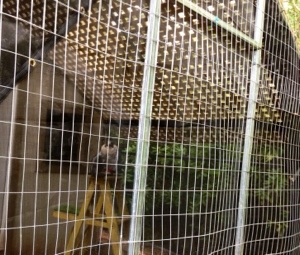 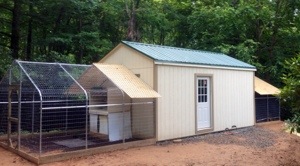 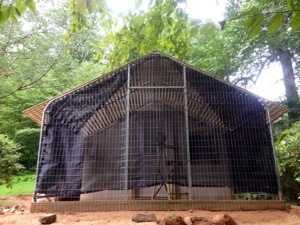 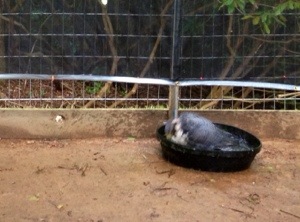 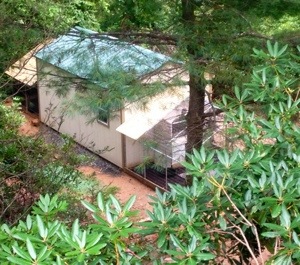