Started the construction project early today. When we left it yesterday, we had begun taking down one of the temporary enclosures, to add the door to the new enclosure Jack erected while I was away. We rebuilt the door and framed the opening in which we hung it. Here’s what we’d accomplished yesterday: 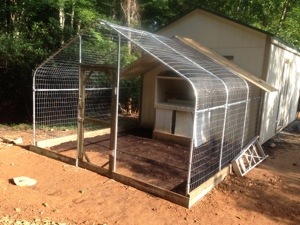 With the birds housed in my car for the next day or two, we finished the deconstruction of the temp enclosure that we will re-build on its permanent site:

Schlepped the hoops and poles and footboards down the hill. Planted the sleeves that anchor the structure’s hoops; set the hoops; attached the purlins; set the ridge beam; and then lost the dogs (they tend to wander off up the Blue Ridge Parkway).

And it began raining. With thunder and lightening. Jack endured a while, and cut the footboards up in the basement, and we installed them between raindrops. But he finally scuppered to the house. I did some rain runoff management, and then installed the 6-ft wire on the enclosure. There is nowhere to stand for decent pix so I did the best I could. The first hoop goes on the building, and the others are erected then covered with wire. The entire roof of this enclosure will be the privacy lattice that covers the back (4 ft) of the other one.

And then a nice pic of my blue cloud spirea, that blooms in late summer. 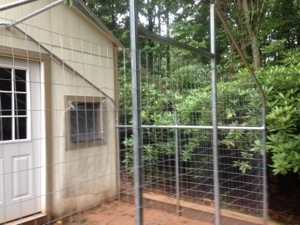 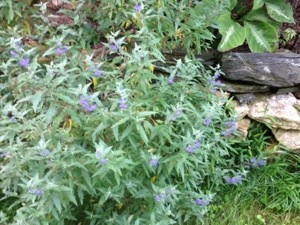 One thought on “Construction progress”